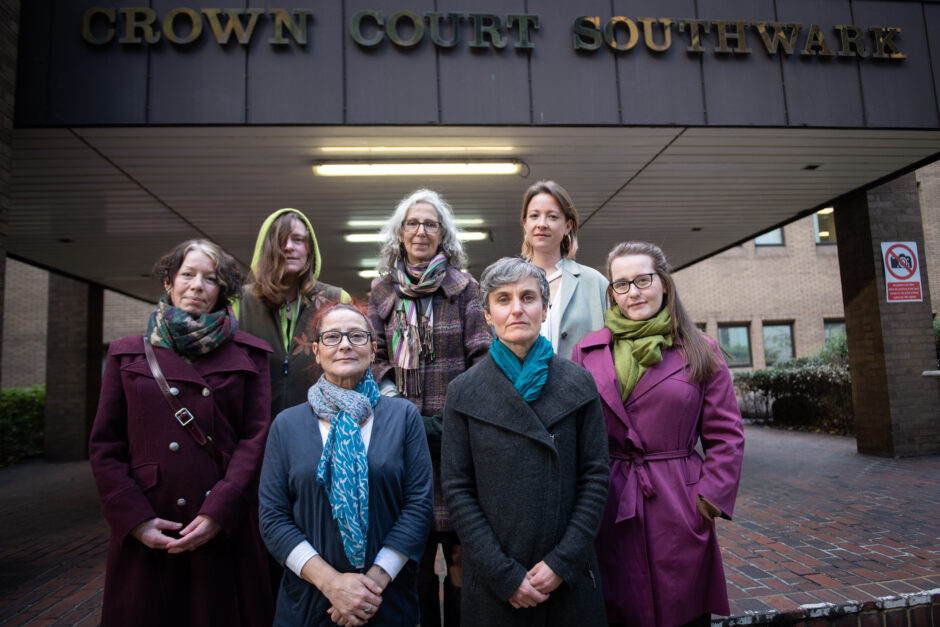 Sentencing is due to take place on January 27th 2023, with a maximum penalty of up to 18 months in prison. This is XR’s eighth case to be heard before a jury. Of the eight Extinction Rebellion jury trials that have taken place to date, three have resulted in a not guilty verdict. [1] The verdict comes as the UK is on track for the warmest year on record. [2]

The verdict reflects the increasing repression of climate protestors around the world, including in the UK, at a pivotal time in the fight to tackle the escalating climate emergency. [3] There are currently 27 climate activists in prison in the UK.

Giving evidence defendant and former teacher Lucy Porter, told the jury: “We are not above the law. I accept that I cracked a window. I accept that I may be convicted , but I cannot accept that I am a criminal, while companies like Barclays continue to break legally binding agreements which are causing suffering and death across the globe.

“The children I taught have not consented to their world being destroyed in the name of extraction, destruction and profit for a powerful few – no one has asked their permission. They have not been given a voice or a chance to exercise any democratic rights.

“I want to thank you sincerely for the time you’ve sacrificed, putting your lives on hold to be here, doing your duty not only on behalf of the law but also on behalf of society and indeed the future.

That’s a big responsibility and we are grateful and proud to be standing before a jury of our peers.”

Defendant Zoe Cohen, said: “When the UK government and judiciary is doing its utmost to clamp down on ordinary people trying to protect life, and prevent societal breakdown, the jury system is a small chink of light and hope. We are ever grateful to our 12 peers for their time and attention. The inability of Juries to consider ‘Necessity’ as a defence – that our actions were necessary to prevent greater harm – in cases like ours is beyond madness. It looks like 2022 will be the UK’s hottest year ever, 30 million people in Pakistan have been displaced by exterme floods this year, and Europe remains in its worst drought for 500 years. I remain more terrified of climate and societal breakdown than I do of the consequences of this verdict.

“After these 10 days, it is even more obvious to me that our establishment is in total denial, and that the Law as it currently stands is utterly unable to protect us. It is the real criminals – the banks and corporations causing and enabling this catastrophe – that should be in the dock. Unless many more ordinary women, and men, step up into peaceful civil disobedience, we and our children will die of obedience.”

The action was designed to increase public awareness of Barclays complicity in escalating climate change. Barclays is the UK and Europe’s largest financier of fossil fuels. Since 2021, when the International Energy Agency concluded there could be no new oil, gas or coal development if the world was to reach net zero by 2050, Barclays has invested over $19 billion in fossil fuels. [4] Since the Paris Climate Agreement in 2016, their total investment in fossil fuels is over $166 billion. [5]

During the action, which took place at around 7am on April 7th, 2021, the women placed stickers on the windows of the bank reading ‘in case of climate emergency break glass’ before carefully hitting the glass with hammers and chisels. They then sat down next to the broken windows and waited for police to arrive. Each woman wore a patch reading ‘better broken windows than broken promises’ in direct reference to the campaign for women’s suffrage in the UK.

The action was one of six Extinction Rebellion women’s actions inspired by the Suffragettes window breaking tactics. [6] The actions by women in the early twentieth century were a significant part of the campaign to secure the right to vote for women in the UK. Cases for the remaining five Extinction Rebellion women’s window breaking actions are scheduled to be heard in court over the next year.