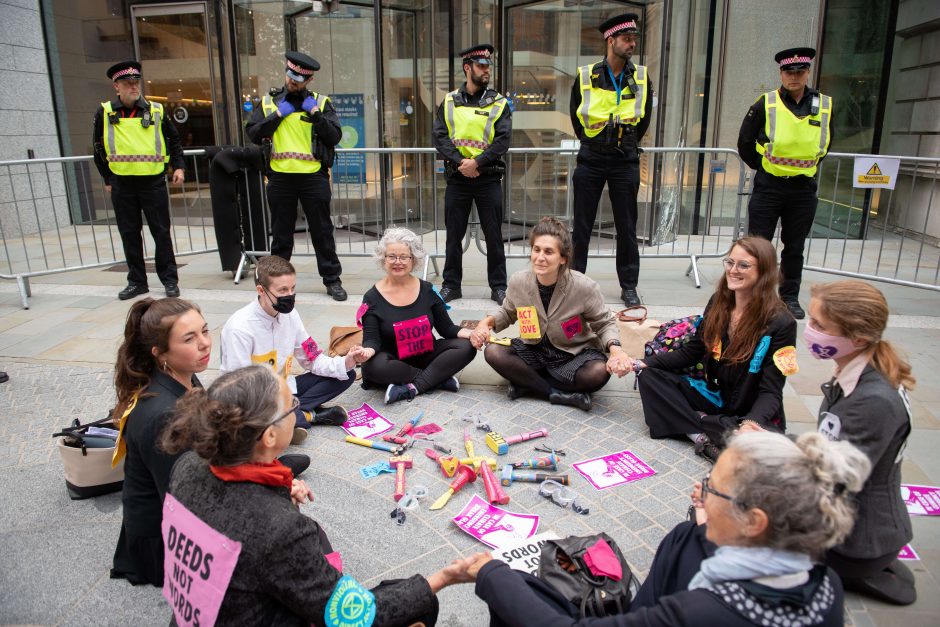 At 7am this morning, 8 women lined up at the European office of JP Morgan at Embankment and carefully broke 2 windows with hammers and chisels. Wearing all black, the women used painted hammers with words such as LIFE, LOVE and CARE on them to break glass at the ‘World’s worst bank’. Before doing so they stuck stickers to the windows that read ‘In case of climate emergency, break glass’. Care was taken to make sure no one inside or nearby the building was put at risk of harm.

After the glass was broken, the women sat down in front of the bank in a circle and waited for the police to arrive. They were wearing patches that read ‘Deeds not words’ and ‘Stop the harm’.

Today’s action is the continuation of a campaign by people taking similar acts of careful and deliberate property damage at banks responsible for funding and accelerating the climate and ecological emergency.[1][2] Barclays, HSBC and JP Morgan have been targeted to highlight the banks’ suicidal business model which is pushing the planet to breaking point. JP Morgan is the world’s worst bank for funding fossil fuels, having invested $317bn into them since the Paris Climate Agreement was signed 5 years ago.[3] The bank currently has no commitment to drop clients who don’t align with staying with 1.5 degrees, and no commitment to zero out financed emissions. They are also masters of ‘greenwashing’, having said they would be “powered by renewables by 2020.”[4]

Sally Davidson, who took part in the action, said: “I do not take this action lightly. I have thought about it long and hard, considered the morality of it, the legal implications, the repercussions and possible impact on my friends and family. But each time it comes down to this: climate change and the extraction of fossil fuels are causing untold damage to people’s lives and livelihoods, and damage to a pane of glass is insignificant in comparison. If this act of property damage is necessary to raise the alarm about the greater destruction caused by the financial investments of JP Morgan to public attention, then I am prepared to do it.

“I recognise that I am profoundly privileged: I live in the West, I have a secure home and supportive family, I am white in a country that is still plagued with systemic racism. I want to use that privilege to stand alongside those who do not have that privilege, but are too often facing the greatest impact of climate breakdown.”

The action is part of Extinction Rebellion’s Impossible Rebellion where we are calling for an intervention on the City of London and demanding an immediate end to all new fossil investments. The political economy is the root cause of the climate and ecological crisis, with destruction and exploitation hardwired into it. In banking, Barclays and HSBC between them have a carbon footprint nearly twice that of the entire UK.[5] Last month the world’s leading authority on climate science, the UN’s Intergovernmental Panel on Climate Change (IPCC), warned of ‘code red for humanity’ and that the chance to limit global warming is rapidly slipping away.[6] Yet, none of the top ten firms in the City of London have a serious plan to divest from fossil fuels.

That is why women are rebelling in the City of London demanding a stop to all new fossil fuel investment immediately, because we are out of time and it’s the most obvious and necessary thing that could happen right now.

Rosemary Webster, 63 from Dorchester, said: “Banks must stop the harm they are causing right now to avoid climate collapse, which will disproportionately affect women globally as society breaks down. 70% of the world’s poorest people are women and they are already on the frontline of the climate and ecological crisis.

“This action which is part of XR’s Impossible Rebellion, draws on a history of civil disobedience and follows in the footsteps of suffragettes, and the Ploughshares movement: using nonviolent direct action, causing damage to property to draw attention to and prevent greater damage.”

The action at JP Morgan comes after several days of occupations held by Extinction Rebellion across London, where levels of police violence against peaceful protesters have been increasing.[7]