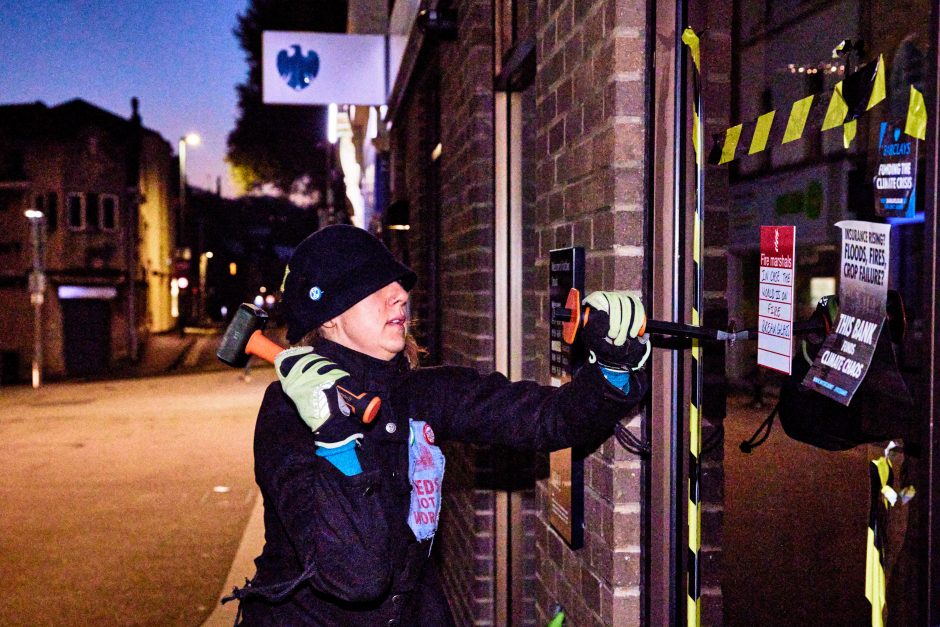 The action is part of XR’s Money Rebellion, [2] which draws on a history of civil disobedience using window breaking and seeks to expose the role of banks in the climate and ecological crisis alongside the wider issues in the current political economy. [3]

Dr Bradbrook said: “Our leaders are not pushing for rapid action, they are ignoring the science– targets are inadequate and aren’t being met. We are on a path towards the collapse of our civilisation –with billions dying in our children’s lifetimes, according to some scientists. Those who are failing to lead adequate action on the climate and ecological crisis are committing Crimes Against Humanity.”

In a short film Dr Gail Bradbrook explains her reasons for taking action:

Barclays’ investments in fossil fuels and biodiversity loss amount to billions, and it is argued that their actions are helping to drive the climate and ecological emergency. Barclays are the biggest funders of fossil fuels in Europe, financing fracking, coal, and Arctic oil and gas extraction. Between 2016, when the Paris climate agreement was signed, and 2019, they poured more than $118bn into fossil fuels, and in 2019, they were the worst bank for fossil fuels in the Arctic. [4]

Today’s action also puts a spotlight on Barclay’s role in funding industrial animal agriculture, which is a leading cause of biodiversity loss, greenhouse gas emissions, and air and water pollution. Barclays are one of the main creditors of Cargill, North America’s largest beef processor with a footprint of worldwide environmental degradation and animal and labour exploitation. [5] The main cause of Amazon deforestation (accounting for around 80%) is cattle ranching and soy production. [6]

Barclays has also been implicated in various tax dodging scandals [7]. Tax dodging is believed to make it harder for all countries, especially those in the global south, to finance the transition to a green economy and support measures such as the education of women and girls. Tax dodging costs the world’s tax authorities the equivalent of an annual nurse’s salary every second and is considered a form of neo-colonialism. [8]

The action demands are that the banks:

1. Tell the truth by fully disclosing their social, climate and ecological impacts whilst highlighting that such destructive behaviour is incentivised by our current political economy.
2. Act now to stop financing and enabling destruction in the shortest possible time frame and ends the:

3. Champion Citizens’ Assemblies at all key levels, including the global, with mandates to design a regenerative political economy in service to all people and life on earth.

[1] Extinction Rebellion disrupt UKs Department for Transport – where is the plan to meet a net zero target and halt biodiversity loss??​​​​​​​:https://extinctionrebellion.uk/2019/10/15/extinction-rebellion-disrupt-uks-department-for-transport-where-is-the-plan-to-meet-a-net-zero-target-and-halt-biodiversity-loss/

[5] Cargill: The worst company in the world, Mighty Earth, 2019: https://stories.mightyearth.org/cargill-worst-company-in-the-world/

[6] Investing in Amazon crude: The Network of Global Financiers and Oil Companies Driving the Amazon Toward Collapse, Amazon Watch, 2020: https://amazonwatch.org/news/2020/0312-investing-in-amazon-crude