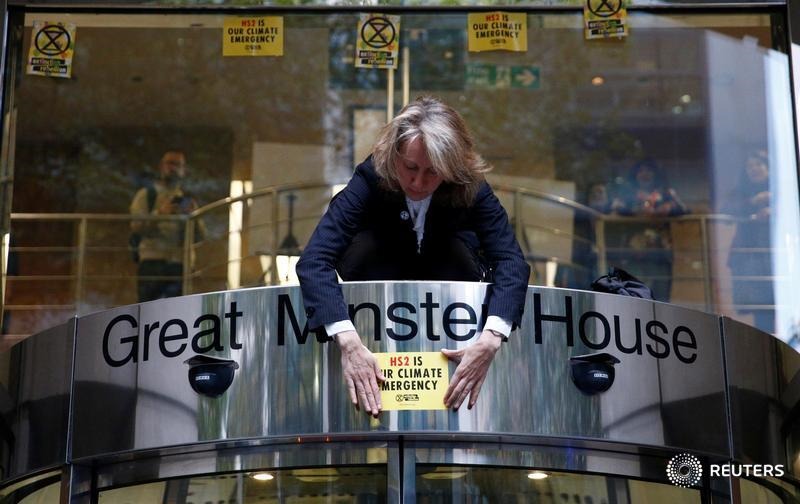 Extinction Rebellion disrupt UKs Department for Transport – where is the plan to meet a net zero target and halt biodiversity loss??

This morning, Extinction Rebellion are protesting at the Department of Transport building in London, calling on them to explain their plan to meet a net zero target within the carbon budget of the UK and halt biodiversity loss.

Co-founder, Gail Bradbrook, is standing on top of the entrance of the building lightly hammering the glass with a hammer while another activist is lying on the ground and locked-on to the side of the building.

Co Founder of Extinction Rebellion Dr. Gail Bradbrook said: “I do this for the beautiful pear tree at Cubbington Woods, 250 years old they have no rights (gender to be confirmed!!), I do this in fierce love of the 108 ancient woodlands threatened by HS2, this climate crime of a project. I do this in the spirit of what Emmeline Pankhurst called “the noble art of window smashing.”

Pointing out the failings of our current democracy, Extinction Rebellion highlight that the Department of Transport have no transition plan in place to support the decarbonisation of the UK economy, even worse they are continuing to invest in fossil fuel based projects.

Extinction Rebellion is calling for a plan for transitioning the UK to a zero carbon transport system, for a law of ecocide to stop mass damage and destruction of nature and for nature to have rights.

The aviation sector is one of the fastest growing polluters. In 2010, the aviation industry carried 2.4 billion passengers; in 2050, that number is forecast to rise to 16 billion. Without action, emissions from increased air travel will triple by 2050, and HS2 will be the UK’s primary enabler for this growth.

The government is approving airport expansion and promoting the biggest aviation shuttle service, HS2, enabling massive airport expansion across the UK, starting with Birmingham airport, which already is planning to spend £500million to expand by 40%, and then Manchester and Leeds in phase two of the rail project.

HS2 is a manifestation of all or organisation stands against, and completely incompatible with our net emissions goal.

The controversial rail projects spiralling costs have been estimated at over £100billion and campaigners point out the costs will only rise especially as environmental activists commit to resisting the project throughout its lifetime.

Gail added: “Imagine the good we could do with HS2’s anticipated cost to rapidly accelerate towards our demands to halt biodiversity loss and reduce greenhouse gas emissions to net zero by 2025. If the government is serious about plans to meet net zero target they need to stop funding destructive projects such as HS2 and airport expansions”

HS2 is set to be one of the largest deforestation programmes since the First World War. Along the planned HS2 route, a 108 ancient woodlands and hundreds of precious wildlife sites are due to be destroyed or damaged.

There is also great concern over the impact the HS2 could have on the water supplies in water-stressed areas along its route, following an increase in the volumes of water projected to needed by the project. Plans are putting 22 percent of London’s water supply at risk – with plans to pile-drive into an aquifer in the Colne Valley Regional Park, Hillingdon.

HS2s own analysis projects that it would still have a carbon footprint of 315k tonnes after 120 years and that’s not including construction, just operation. [1]

The Oakervee review, the review as to whether HS2 should be scrapped, closes today, with the review giving its decision to the Government this Friday.  The government must halt such an environmentally disastrous project.

Transport is the only sector where greenhouse gas emissions have increased since 1990.

Analysis shows the Department for Transport plans breach carbon budgets [2].  Radical action to cut emissions from road transport and aviation over the next decade and beyond are needed. This will require DfT to constrain demand for road and air travel.

To find out more watch the new ‘HS2 in 1 minute’ film at HS2rebellion.org to see and share the essential facts.

As we face an ecological and climate crisis,  Governments worldwide insist on exponentially increasing an exploitative economy, with 600 airports set to expand, increasing flights by billions globally.

This will lead toward ever increasing temperatures globally, causing widespread crop failures, which is already a dire situation in many African regions, making it almost impossible to grow food in the tropics and leaving a vast part of the Earth uninhabitable.

The Climate and Ecological Crisis is already driving mass forced migration, droughts, famines, death and wars over resources. What is already a nightmare for many in the Global South threatens to engulf us all

“And carbon emissions are not the only environmental challenge posed by a growing aviation sector. Nitrogen oxides, particulates, noise, and lead pollution also impact often disadvantaged communities living near airports.” The International Council on Clean Transportation.

New polling of marginal constituencies shows HS2 has the lowest support of any infrastructure project in the UK at around 5%. The most popular people’s choice is to make every house in the UK energy efficient for a fraction of the cost, which would realise immediate Net Zero goal benefits, rather than take us beyond the point of no return, into climate and ecological collapse.

[2] Friends of the Earth Analysis shows Department for Transport plans will cause UK to breach carbon budgets; radical new plan needed to cut aviation and road transport carbon by 2030.

The Department for Transport (DfT) has gone rogue on climate change. Transport is the only sector where greenhouse gas emissions have increased since 1990. A new analysis shows that the DfT’s continued failure to curb emissions will lead to the UK breaching existing carbon budgets over the next decade, even before budgets are tightened on the pathway to net zero. Radical action to cut emissions from road transport and aviation over the next decade and beyond are needed. This will require DfT to constrain demand for road and air travel.

The government is investing £30 billion in new roads but a miserly £120 million annually in new protected sections of a national cycleway network.

Since 1980, the government has helped the costs of motoring go down 20% but they have raised the costs of public transport by 64%, thus encouraging more fossil fuel burning.