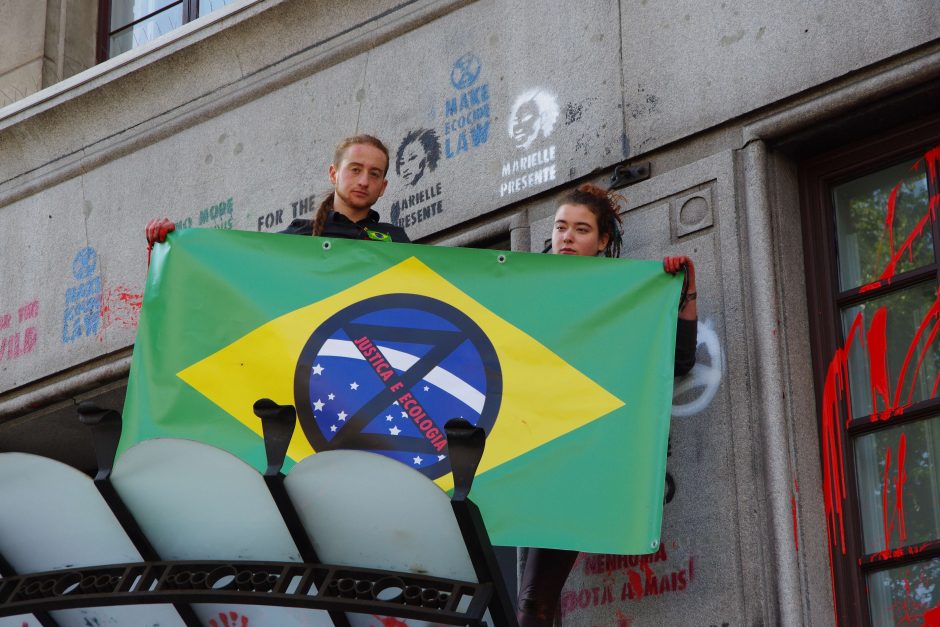 Three Rebels were today convicted of taking action at the Brazilian Embassy against the ecocidal and genocidal regime of President Bolsonaro. Possible sentences range from a community order to 18 months in prison.

Judge Perrins ruled their defence of ‘necessity’ was inadmissible which left the group no defence under law. Beatrice Zappi Taylor, Lachland Sandford and Barbara Cookson were part of the ‘snowflakes’ affinity group which blockaded the embassy entrance and spray painted messages onto the building including STOP ECOCIDE, NO MORE INDIGENOUS BLOOD and MAKE ECOCIDE LAW using red paint to symbolise blood.

A fourth defendant, Richard Barnard, who was accused of assisting the action and was also charged with criminal damage, has been found not guilty.

One person not in court was Iggy Fox, a veteran of the snowflakes group. The activist sadly died of a heart condition last year. His defence statement was read out in court. His parents said this evening: “True justice is moral justice. Moral justice has not been served in court today. This judgement validates a toxic ecocidal system.”

Two years after the protest, deforestation of the Amazon continues to advance rapidly, with over 8000km2 lost in 2020. With the rainforest now emitting more carbon than it is absorbing. Brazilian academics and activists are warning that the Amazon “will collapse if Bolsonaro remains president”.