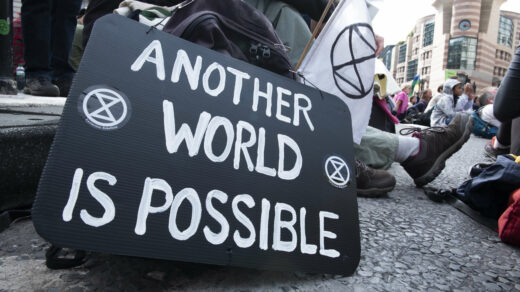 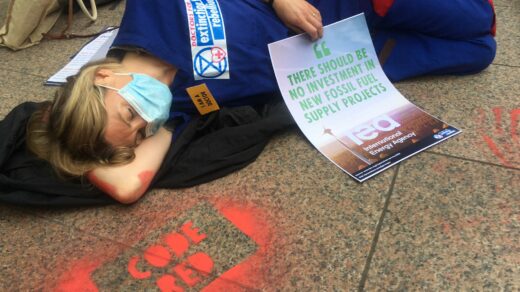 This morning, sixty doctors, nurses, midwives and other healthcare workers delivered an urgent public health message to the world’s biggest fossil fuel funder JP Morgan. Four held a banner saying  ‘End Fossil Fuel Funding’, others chalk-sprayed ‘CODE RED’ on the walls and the rest staged a ‘die in’ in front of the doors to symbolise the deaths caused by fossil fuel funding. Several doctors were forcibly removed quickly and aggressively by security. 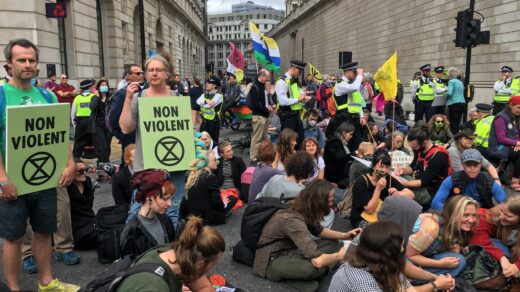 conditions in an act of mass civil disobedience. They pledged to stay sitting in the road outside the Bank of England until the governor of the bank and the Prime Minister of the UK declare an end to all new fossil fuel funding in line with Extinction Rebellion’s immediate demand. Those breaking police bail carried placards reading ‘arrested on suspicion of acting on the climate emergency’, ‘arrested for wanting a future for our children’ and ‘arrested for caring’. 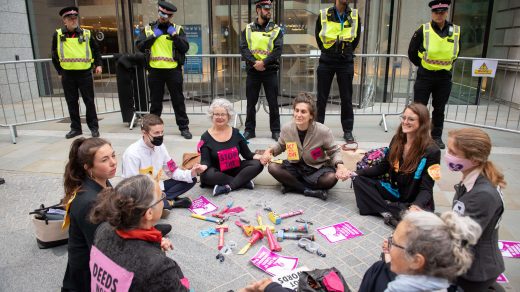 At 7am this morning, 8 women lined up at the European office of JP Morgan at Embankment and carefully broke 2 windows with hammers and chisels. Wearing all black, the women used painted hammers with words such as LIFE, LOVE and CARE on them to break glass at the ‘World’s worst bank’. Before doing so they stuck stickers to the windows that read ‘In case of climate emergency, break glass’. Care was taken to make sure no one inside or nearby the building was put at risk of harm 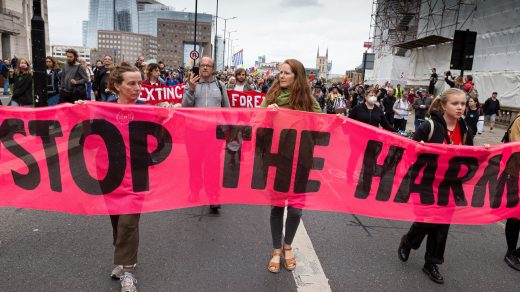 STOP MAKING IT WORSE: Extinction Rebellion will get off the streets when Government and the City of London stop pouring petrol on the fire

It is the 9th day of the Impossible Rebellion and Extinction Rebellion is taking our immediate demand to stop all new investment in fossil fuels to the doorsteps of the Government and the City of London. 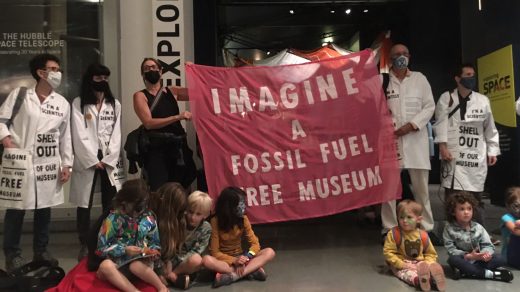 IMAGINE THE IMPOSSIBLE: XR Scientists, Youth, Families and Communities lead in an occupation of the Science Museum and blockade of Cromwell Road

At 6pm on Sunday August 29 around 100 people from Extinction Rebellion, including members of XR Youth, XR Scientists, XR Families and XR Communities occupied the science museum with the aim of preventing this iconic institution from opening its doors on the August Bank Holiday Monday. Inside the museum the group held a banner inside the Museum reading ‘IMAGINE A FOSSIL FUEL FREE MUSEUM’. 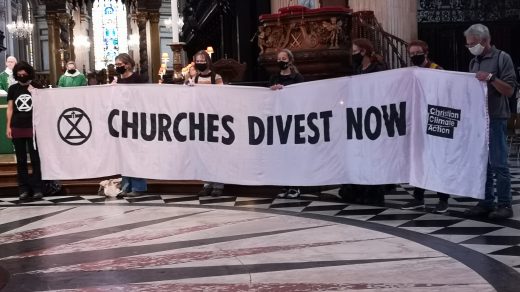 Sixteen members of Christian Climate Action, including several clergy members, today staged a protest inside St Paul’s Cathedral to demand the Church of England divest from fossil fuels. Immediately following Communion at a Eucharist service, the group processed to the altar and, facing the congregation, held up banners that read: ‘No Faith in Fossil Fuels’ and ‘Churches Divest Now’. Christian Climate Action is demanding the Church makes an immediate pledge to end all investment in fossil fuel companies and completes that divestment by 31st December 2021. 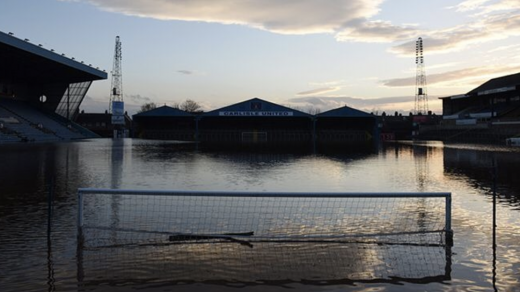 Commencing with a 2pm kick-off this Saturday at Fulham Football Club, football fans and environmental activists host ‘pop-up’ football matches on the streets of London to raise awareness of the relationship between football and the climate crisis. According to a report from the Rapid Transition Alliance, a quarter of English Football Stadiums ‘Unplayable’ by 2050 due to climate change. This action is aimed at engaging football fans by highlighting the clubs, including Fulham FC, that will be partially or fully underwater by 2050 if action is not taken to reduce emissions. In June this year, the government’s own climate advisers, the Committee on Climate Change, said that the government is ignoring their advice and failing to protect people from the fast rising risks of the climate crisis. 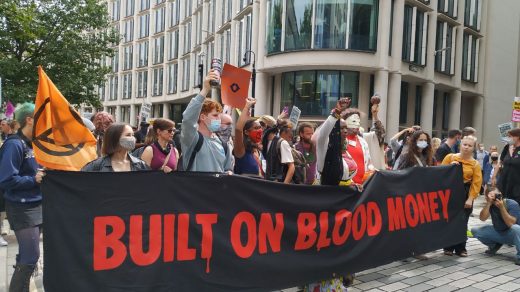 THIS IS AN INTERVENTION: Extinction Rebellion heads to the City of London to take action on the root cause of the climate and ecological crisis

After 4 days of Crisis Talks popping up across Central London, Extinction Rebellion will shift focus today by moving to the City of London, the driver of climate and ecological destruction. Leading with our new immediate demand - for the UK Government to stop all new fossil fuel investments immediately - we will make it clear that the responsibility to rapidly decarbonise starts right here in the City. 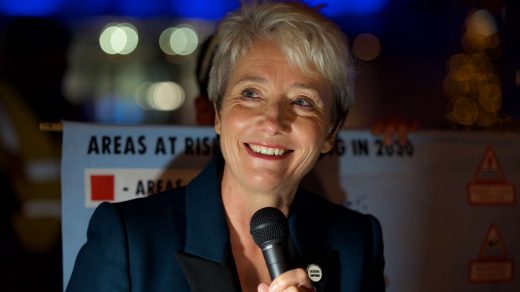 “If we’re not all in this together, we’re not going to win this battle”: Emma Thompson comes out in support of the Impossible Rebellion

After 3 successful days of the Impossible Rebellion, with spirits soaring high following a day of action at Oxford Circus where thousands of people were able to participate, we begin Day 3 on another high. Award winning actor, Emma Thompson has shown her backing for the Rebellion today in a video message, calling Extinction Rebellion “essential.” 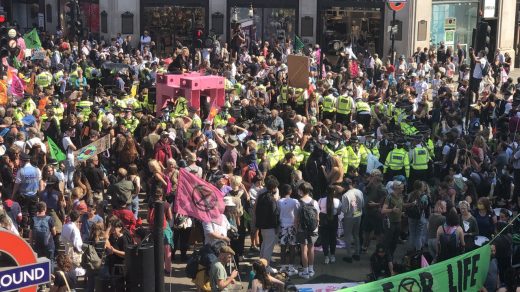 BREAKING: Extinction Rebellion block Oxford Circus calling on women to take their seat at the table and demand climate action

At 2pm on August 25, more than forty women blocked the Oxford Circus junction in central London. They have erected a 2.5m tall structure designed to look like a giant table with a banner that read ‘COME TO THE TABLE’, while placing two chairs facing each other at the top. The chairs were left empty to represent an invitation to all those who identify as female, nonbinary or trans: the crisis is here - come and take your seat at the table and demand the urgent action needed to tackle the climate and ecological emergency. 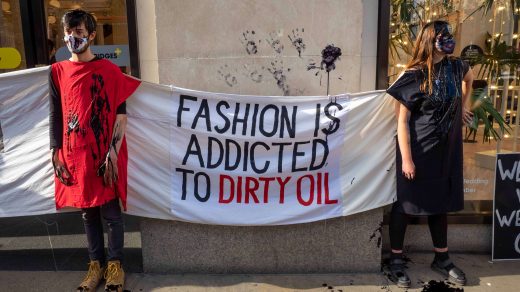 On the afternoon of Tuesday 24th August 2021, four members of Extinction Rebellion Fashion Action glued themselves to the front door of Selfridges on Oxford Street. They were wearing a dress inspired by designer Issey Miyake's 'A Piece of Cloth' (APOC) which displayed the messages: 'Fashion is addicted to dirty oil' and 'Code red for fossil fuel fashion'.