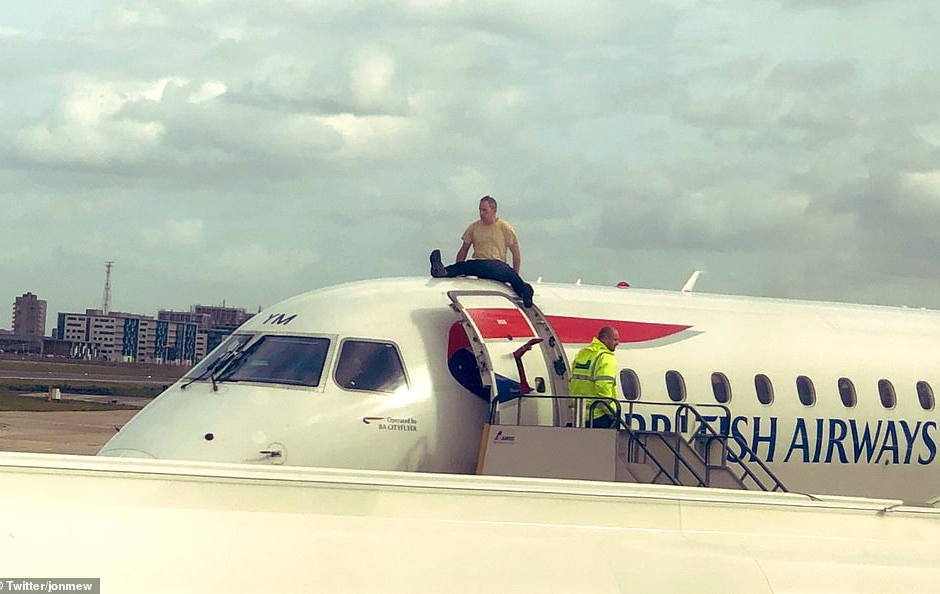 Paralympian who scaled a plane guilty of public nuisance

Former Paralympian, James Brown, who climbed on top of an aircraft during XR’s October 2019 Rebellion was yesterday found guilty by a jury at Southwark Crown Court.

James, 56, who is registered blind, was charged with public nuisance after live-streaming from the top of the plane at London City Airport and gluing himself on.

His action was part of Extinction Rebellion’s occupation of the airport on 10th October 2019 in protest against aviation expansion and the climate impact of flying. [1]

This was Extinction Rebellion’s fourth jury trial, and follows the acquittal in April of six people for criminal damage to Shell’s London HQ, despite all but one having no defence in law. [2]

James, who during his career competed in several athletic categories and won two gold medals for Great Britain at the 1984 New York Paralympics, denied he had caused a public nuisance.

Giving evidence, James told the jury he took the action out of fear for his children’s future: “I want all the children of our world to grow up free from the impact of starvation, war and the other horrendous impacts of the climate crisis. That’s not going to happen. Their future is terrifying.”

With the UK government failing to act, the only way to achieve vital change is through civil disobedience, he said.

“I’m a desperate father. There’s nothing else I can do. I can only protest. That’s the only option I have open to me now.” He added: “I hope I’ve made a difference.”

James will be sentenced by Judge Gregory Perrins on 17th September.

As extreme weather sweeps the globe due to global heating and its effect on the gulf stream, the Intergovernmental Panel on Climate Change (IPCC) is preparing to publish its sixth Assessment Report. [3]

A leaked copy of the report, obtained by AFP news agency, says the devastating impacts of climate change will be felt sooner than previously predicted, and will fundamentally reshape life on Earth in the coming decades. [4]

It says species extinction, more widespread disease, unliveable heat, ecosystem collapse, cities menaced by rising seas and other devastating climate impacts are accelerating, and that the choices societies make now will determine the fate of our species as the 21st century unfolds.

Extinction Rebellion’s occupation of London City Airport was designed to highlight the climate impact of air travel. The most energy-intensive activity an individual can undertake, no other human activity consumes as much energy in such a short time.[5]

Air travel is an elite activity. Only a tiny percentage of the global population can afford to fly and they have a disproportionate carbon footprint. Taking a long-haul flight generates more carbon emissions than the average person in dozens of countries around the world produces in a whole year. [6]

The UK government has repeatedly been advised by its own Climate Change Committee (CCC) to limit the growth of aviation, starting with a halt to airport expansion. The government’s suggestion, in its Transport Decarbonisation Strategy, that the public can continue to fly since aviation will be carbon neutral by mid-century has been widely ridiculed.

The government has recently proposed a reduction in Air Passenger Duty Tax whilst the industry is already estimated to be subsidised by £7bn per year. [7]

Serena Shellenberger, 60, former TV producer from Sussex, who was arrested for live-streaming James’s action said: “I’m devastated by the verdict. It was such an honour to be James’ airside live streamer.  His testimony was incredibly moving and harrowing to witness. But he delivered it with such confidence and brilliance and a few tears.

“A few passengers were inconvenienced that day but it was minimal compared to the catastrophic future we face as our climate breaks down.

“His actions were heroic and sacrificial. What an outstanding human being he is!”

Extinction Rebellion member and Olympic canoeist Etienne Stott, said: “Recently we’ve seen athletes like Marcus Rashford speaking out on subjects which some might describe as ‘political’ and others would just say demonstrate some care for others. Sportspeople have incredible platforms and I think it takes bravery to speak out and use their voice. [8]

“It’s clear to me that James Brown is using the determination and focus that athletes possess to push for meaningful action in response to the climate and ecological emergency. Our government is failing us and future generations and I believe he is justified in taking peaceful, but direct action to call attention to this scandal.”

[1] The City Airport occupation was intended to peacefully disrupt ‘business as usual’ and highlight the incompatibility of City Airport’s half a billion pounds planned expansion with a liveable future.

[2] Since April 2019, around 2000 people have been prosecuted for offences related to Extinction Rebellion protests, primarily the Rebellions in April 2019, October 2019 and September 2020. The vast majority concluded this month, however there are still a handful of trials taking place between now and October. Most XR prosecutions are for minor offences like obstruction of the highway or unlawful assembly (Section 14) and are heard in the magistrates courts. The standard sentence is a conditional discharge for 6-12 months or a small fine, along with court costs of a few hundreds pounds.

There is also a handful more cases making their way through the higher Crown Courts, which will be heard before a jury. They include a group who scaled a DLR train during the April 2019 Rebellion, the Fire Engine action at the Treasury action from October 2019, the lawn diggers outside the Home Office and XR co-founder Gail Bradbrook for criminal damage at the Department for Transport.

Richard Hering, who was also part of the London City airport blockade and delayed a flight taking off by refusing to take his seat inside the cabin, will be tried in May 2022.

Earlier this month, Ben Benatt became one of the first XR defendants to be acquitted for Obstruction of the Highway following the landmark Ziegler Supreme Court ruling. It follows two previous acquittals on the human rights act that pre-date Ziegler. In April 2021, anthropologist Justin Kenrick was found not guilty of obstructing the highway since police had interfered with his human rights by arresting him. The CPS had begun proceedings to appeal Justin’s acquittal in the High Court but as a result of the Ziegler ruling it has now conceded its objections.

There have also been calls for the courts to cease the criminalisation of peaceful climate protesters acting to help safeguard all our futures. In May, Peter Hain (former Secretary of State For Northern Ireland for Work and Pensions and for Wales) called for a halt to all XR prosecutions. In April, a group of scientists wrote an open letter to governments demanding they stop criminalising peaceful climate campaigners.