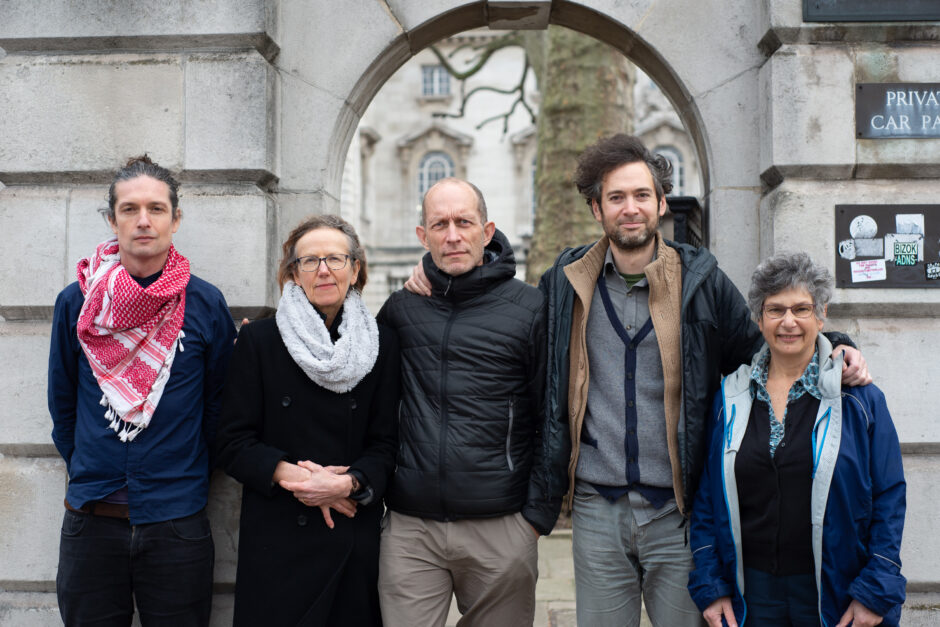 Six XR protesters who stopped a Docklands Light Railway train at Canary Wharf in April 2019 have been acquitted after convincing a jury their behaviour was a lawful response to imminent climate breakdown and ecological collapse.

All six admitted their part in the action and its planning, but argued they were within their rights to protest.

During the action on 25th April 2019, five of them climbed on top of the train and displayed banners that read “Business As Usual = Death” and “Don’t Jail the Canaries” (in reference to three protesters who were on remand at the time for an earlier protest at Canary Wharf), while one, Dr Diana Warner, glued herself to a train window.

When giving evidence, all six spoke of the priority given, when planning the action, to minimising the safety risk to the public and to themselves, while still attracting media attention.

Summarising the evidence for the defence, Henry Blaxland QC told the jury: “We should be thanking them for waking us all up. Not convicting them for a criminal offence.”

This is one of the first protest cases to be heard in the crown court following the Supreme Court’s landmark ‘Ziegler’ ruling and could influence the prosecution of future cases. Extinction Rebellion has a number of other crown court cases coming up next year that will also be heard before a jury. The vast majority of Extinction Rebellion trials (around 2000 to date) have been heard in the lower magistrates courts by a single judge or lay bench.

Following the acquittal, Lawyer Mike Schwarz, of Hodge Jones and Allen said: “The defendant’s motives chimed with the concerns of 12 citizens representative of the wider public. The jury all agreed the climate crisis requires radical action. This reinforces the importance of both civil disobedience and juries in a healthy democracy.”

Ian Bray said: “We are grateful for the love, compassion and moral clarity of the jury which enabled them to reach a unanimous verdict within an hour.”

Richard Barnard said: “Obviously it’s great to win but this cannot be the end until we can change the system so that all species, people and the planet are protected before profit. So we call on all people to go out and take action.”

Ruth Jarman said: “I just want to thank the jury and bless them. I can’t believe they came so quickly to the right decision.”

Nick Cooper said: “I’m moved, but not overly surprised that they came to such a quick decision.”

The six defendants are:

Ruth Jarman, 58, administrator for an environmental charity from Hampshire, mother of three and member of Christian Climate Action.

Richard Barnard, 48, from Kent and member of Christian Climate Action.

Excerpts from their defence given during the trial:

Ruth Jarman: “Once the dominoes of climate breakdown start falling there will be nothing our children can do. My faith tells me it is God’s world not ours and the first thing God asks us to do is to care for it, to tend and keep the Garden.”

Nick Cooper: “The situation we are in is that we’re on the path to genocide. To get major legislative change we need to target the government. The way to do this is to disrupt the ordinary people who vote for them… history proves this to be the case.”

Dr Diana Warner, a former GP, told the jury about a vow she made to a two week old baby she was examining to safeguard her from the climate and ecological emergencies. Since the vow she said. “My life has been about activism.”

She said that during the actions: “I kept thinking, this is so bizarre. I’ve stuck my hand to a train to get the government to fulfill its promises.”

Phil Kingston: “I had three motivations: My grandchildren, my faith and the poorest people on the Earth, who have contributed the least CO2 emissions and are suffering the greatest impacts.

“I knew I might go to prison. That was acceptable to me. I was prepared to take the risk.”

Richard Barnard: “When I came out of the magistrates court on conditional bail, there was a young girl with a sign saying: ‘Thank you for giving up your freeness for my laterness’. “