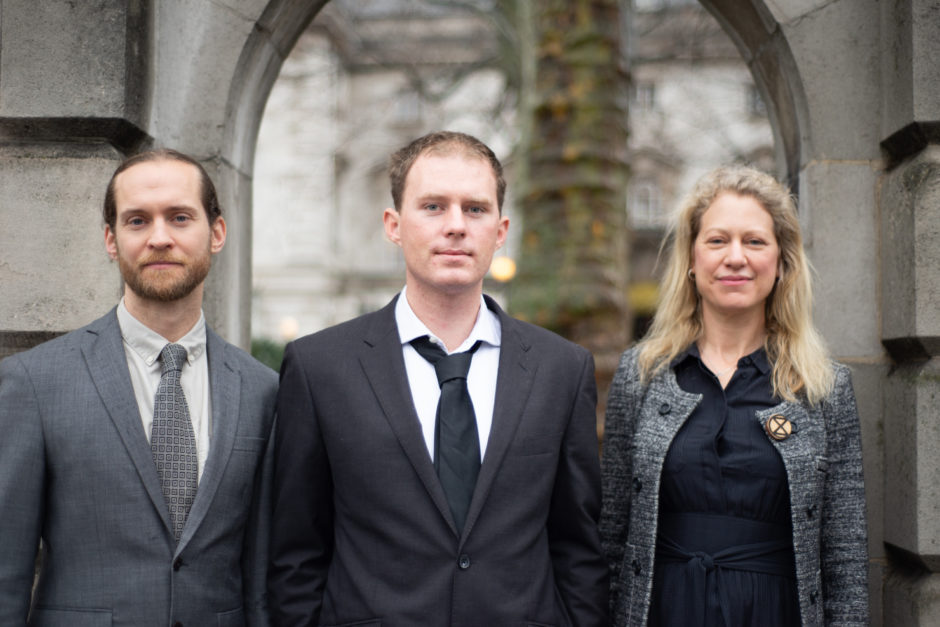 Three Extinction Rebellion protesters who glued themselves to a Docklands Light Railway train during the April Rebellion have each been given a conditional discharge after a jury found them guilty “with regret”.

In the first Extinction Rebellion trial to reach the Crown Court, Cathy Eastburn, Mark Ovland and Luke Watson will not be punished, unless they reoffend within 12 months.

During the action at Canary Wharf station on April 17th, Cathy and Luke climbed on top of a train and held a banner that read ‘Climate Emergency’, while Mark glued himself to the outside.

The trio were planning to argue that their actions were necessary in order to prevent a greater harm, but before the start of the trial at Inner London Crown Court Judge Silas Reid ruled this “necessity defence” was in-admissable.

All three were convicted yesterday of obstructing an engine or carriage by an unlawful act, contrary to Section 36 of the Malicious Damage Act 1861. In delivering the jury’s verdict, their foreman answered “with regret, guilty” for each defendant.

Luke Watson, speaking after the sentencing, said the jury’s expression of regret suggested that – had the necessity defence been allowed – it might have acquitted. “I’m very relieved it’s over and happy with the sentencing… but I feel that the judge ruled unfairly in blocking our defence so early on in the proceedings,” he said.

Handing down his sentence today, Judge Reid praised the trio for their “noble cause”. The time they had already spent on remand in prison after their arrest was also a factor in his decision, he said.

“You each are clear you did what you did to raise the alarm as to the dire situation you each believe the Earth faces in respect of climate change,” Judge Reid said. “You each believe that your actions caused, or at least helped to cause, an Opposition Debate in Parliament to pass a motion declaring a Climate Emergency.

“Your stated cause is to affect change in global attitudes, to save the life of most, if not all the human race. A cause intended to protect human life is obviously a noble one.”

The defendants and their lawyers are now considering whether to appeal.

Luke Watson, 30, a philosophy student from Essex said: “I’m very relieved it’s over and happy with the sentencing, a conditional discharge, but I feel that the judge ruled unfairly in blocking our defence so early on in the proceedings. The jury’s verdict of “with regret, guilty” gave the impression that had our legal defence been allowed they would have liked to acquit us.”

Cathy Eastburn, 52, a musician and mother from London said: “Just as we would not criminalise someone sounding the alarm in a burning building, trying to alert people and wake people up, trying to get people out, trying to save lives, maybe breaking something in order to do that, I don’t think we should be criminalising people who are desperately sounding the alarm on a burning planet, where the fire is getting out of control and threatens us all.”

Mark Ovland, 36, a full time activist from Somerset said: “We acted out of love, and that was clearly recognised by the judge and the jury. No one, it seems, wanted us punished for the action, even if in law it was strictly deemed illegal. When no one wants us prosecuted in the first place I think we’ll have got somewhere – then everyone can just concentrate on the real task at hand.”

For further information, photographs, video of the action and to arrange interviews contact Zoe on 07918 165 046.