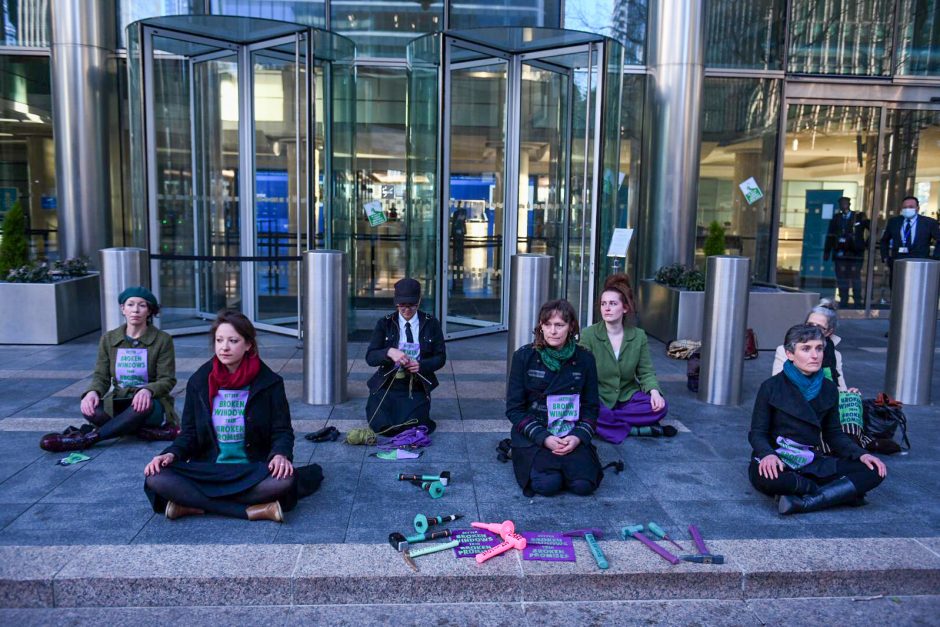 On Wednesday 7th of April at 7am seven women from Extinction Rebellion carefully cracked the glass in the windows of Barclays HQ in Canary Wharf, London. The women wore patches reading ‘better broken windows than broken promises’ and placed stickers on the windows of the bank reading ‘in case of climate emergency break glass’ before carefully hitting the glass with hammers and chisels. The women took great care to ensure the safety of bank staff, fellow activists and passersby. They then sat down next to the broken windows and waited to be arrested.

The action, part of XR’s Money Rebellion, draws on a history of civil disobedience and follows in the footsteps of suffragettes, and the Ploughshares movement: using nonviolent direct action, causing damage to property to prevent and draw attention to greater damage. [1] [2]

It is the latest action in protest at the bank’s continued investments in activities that are directly contributing to the climate and ecological emergency. The women acted knowing a growing number of women are becoming increasingly frustrated and fearful for the future of the planet, their families and communities.

Barclays is the biggest funder of fossil fuels in Europe and has increased spending on fossil fuels in the past year, meaning its current trajectory runs counter to what is needed to achieve the targets of the Paris Climate Agreement. [3]

In an article in the Guardian this week, a spokesperson for the bank said: “We have made a commitment to align our entire financing portfolio to the goals of the Paris agreement, with specific targets and transparent reporting, on the way to achieving our ambition to be a net zero bank by 2050 and help accelerate the transition to a low-carbon economy.” [4] However, the actions of the bank over the past year are completely incompatible with this statement.

A report published in March this year shows Barclays spending was higher in some sectors last year than in the year immediately following the Paris agreement, including increased investment in fossil fuel expansion, fracking, coal, arctic and offshore oil and gas, and tar sands. [5]

The women who took action at Barclays HQ today wore the colours of the suffrage movement – which inspired this action – to highlight the disproportionate impact the climate and ecological emergency is likely to have on women, particularly poor women, BIPOC women and women in the global south. [7]

The International Panel on Climate Change found that “gender inequalities are further exaggerated by climate-related hazards, and they result in higher workloads for women, occupational hazards indoors and outdoors, psychological and emotional stress, and higher mortality compared to men.” [8]

Women around the country also delivered similar requests to local branches. They requested that Barclays give a public, positive response to their call to action (full letter here). To date, Barclays has made no efforts to acknowledge the letter or act on the demands laid out in the letter.

Annie, a 63 year old Grandmother from Dorset, said: “I’m here to say, in the words of Mrs Pankhurst, ‘rather broken windows, than broken promises’. Barclays has broken promises, in fact, the climate hypocrisy this financial institution knows no bounds. Barclays say that their ambition is to be a net zero bank by 2050, itself far too late, all the while they are Europe’s biggest fossil fuel funding bank.

“I want to ask the current CEO of Barclays, James Staley, who I understand is also in his 60s, to mend Baclays’ broken promises and stop funding climate breakdown. But most importantly, I want to be able to say to my grandson that, by my being here and asking Barclays to stop accelerating us towards an uninhabitable world, I am trying to give him a chance to live a safe and full life on this beautiful planet.”

Sophie Cowen, a 30 year old campaigner from London, said: “To the decision makers at Barclays, I want to ask you to look at the latest climate science. I know that there are caring and intelligent people working for Barclays. Your employer is fuelling climate collapse. Now is the time to read up on what is being done in your name and to speak up.

“You may dislike our action today but I ask you to compare a crack in a window to funding wildfires and flooded homes. We took action today because someone needs to raise the alarm, because broken windows are better than broken futures.”

Zoe Cohen, a 50 year old self employed Mum from the North West of England, said: “I am taking this action because I feel I have no alternative. There’s no box on the ballot paper to stop the banks investing in death and the destruction of the living world. Banks like Barclays just keep investing billions in more fossil fuels, nature destruction and plastics pollution. If the general public knew what’s going on I don’t think they would want financial institutions like this harming their kids’ futures.”

Lucy Porter, a 46 year old Teacher from Yorkshire, said: “When my daughter told me that she had decided not to have children, because it would be irresponsible and immoral to bring them into this world, it broke my heart. Why are young people having to make these decisions to mitigate harm to future generations whilst companies like Barclays carry on using public money to systematically destroy our planet and our life support systems? I don’t want to be taking this action, I’m scared, but after years of traditional campaigning I feel I have no options left.”

Gabriella Ditton, a 27 year old Carer from Norfolk, said: “Imagine looking into the future, seeing the suffering, seeing the despair, but being given the chance to change it. This is about doing what is necessary, not what is easy. I act for every man, woman and child who’s security Barclays has sacrificed for their own short term gain.”

[4] Extinction Rebellion to step up campaign against banking system: https://www.theguardian.com/environment/2021/apr/05/extinction-rebellion-to-step-up-campaign-against-banking-system-climate-crisis?fbclid=IwAR3xRzXKnLNGmG5XFc1PZQSwY-5-tvWyz0ozqxkLoSn8ZIGoiSzX-tDHHI0

Reflection Circle for perspectives and learning on today’s action: https://us02web.zoom.us/meeting/register/tZEpce2qrj8uG9BVMHGDmhDcoGu0DbdX8uVA