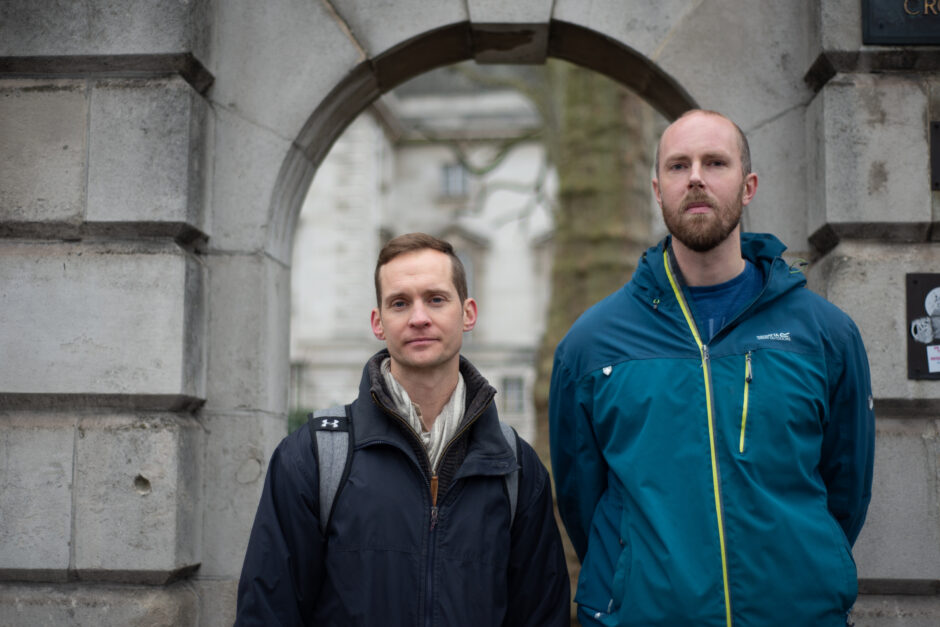 Mark Øvland and James Mee were sentenced to 12 months community order, including 60 hours unpaid work, today for their part in the 2019 Canning Town train action.

Mark, 38, a former Buddhist teacher, and James, 38, an accounts administrator, were both found guilty in January of obstructing an engine in carriage on the railway after they climbed on top of a DLR train at Canning Town station in October 2019.

Ovland said in a statement, “The climate crisis is real, I think we all know that now, and its impacts are going to be increasingly devastating. We need to come together, we need to put our arms around each other and support one another as we walk into this uncertain future.

“As for my sentencing, that has always been the least concern for me. What was important was raising the alarm on the climate crisis, no matter what personal repercussions there’d be.”

During their trial in January, Judge Silas Reid at Inner London Crown court denied Mark and James the chance to argue that they were exercising their right to protest as set out in articles 10 and 11 of the Human Rights Act. Instead, he directed the jury that the two of them had no defence in law.

Uniquely for an XR action, anger from some disrupted members of the public tipped over into violence. A video of James using his foot to push away a passenger who was trying to pull him off the train has been widely shared. There has been much reflection since the action by both Mark and James and the wider movement and lessons have been learned. We offer our wholehearted support to them both.

Returning their guilty verdict, the jury asked if their foreman could read a statement to the court in which they said: “We, your jury, want to take this opportunity to let the Court and the defendants know that we all wholeheartedly support the cause. Our verdict is based purely on the law rather than personal feelings about climate change.”