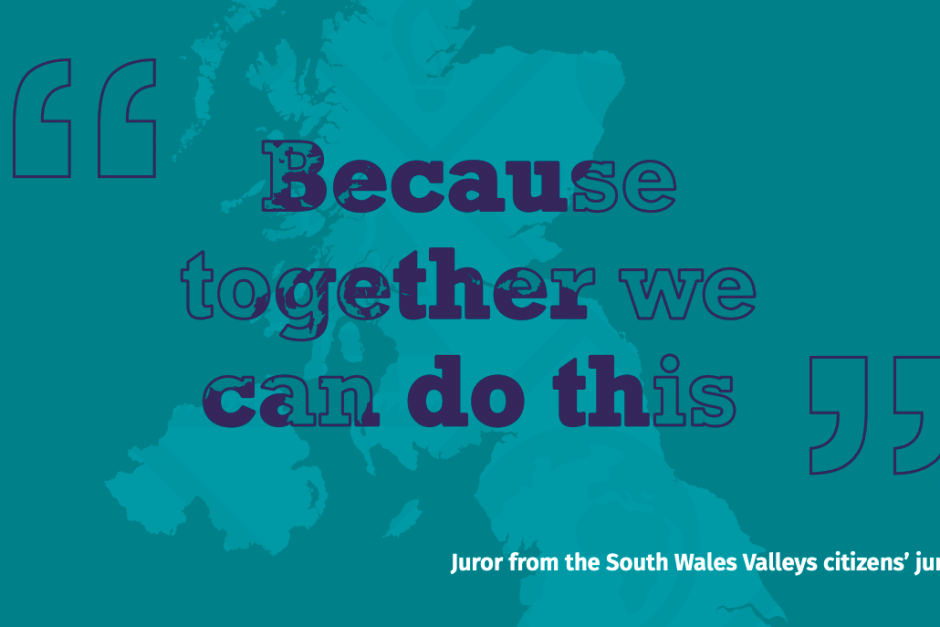 From its very beginning Extinction Rebellion’s Third Demand for a Citizens’ Assembly on Climate and Ecological Justice has called for the voices of citizens, people with different life experiences, to be party to decision making. Having brought it to the forefront, many have joined this call to revive democracy. A call which is gathering pace from all directions: local, national, UK-wide, European, and global.

The latest is in the final report from the Environmental Justice Commission, part of progressive think tank Institute for Public Policy Research (IPPR).  This Commission includes members such as Hilary Benn MP Caroline Lucas MP Laura Sandys, and has been holding “deliberative workshops, listening exercises and citizens’ juries around the UK with people from many different walks of life.” The report, Fairness And Opportunity: A People-Powered Plan for a Green Transition, was released last week presents “ideas and policies to bring about a rapid green transition that is fair and just.”

Yes, another think tank, another inquiry, another consultation, but: it’s bold, people-centred and adds to the increasing call for change, real change.

Citizens’ juries and a focus on fairness

The report was influenced by the insights of the people who were part of four citizens’ juries (similar to citizens’ assemblies but smaller). These citizens’ juries took place in four areas of the UK set to be most impacted by the transition. The participants, or jurors, were presented with information and ideas, including from local people with on the ground experience of climate and environmental action. So the real stories of local communities, the different needs and challenges in different places, the importance for young people to be actively involved in shaping their future, and that no one should be left out, are what shaped the recommendations.

The report outlines the way forward as six major shifts (see page 9 in the report summary) that the UK needs to make to address the climate and nature crises. These are drawn from the insights of jurors from the citizens’ juries across the UK.

Some bold recommendations have been made including ‘a drive towards a local public transport system that is free at the point of use by 2030, to make green travel the easy choice and reduce the need for car ownership’.

Additionally, we welcome the move towards putting fairness and justice at the core of planning and decision making. As a member of the Tees Valley and County Durham citizens’ jury said: “No one can be left out. A fair response to the climate and nature emergencies needs to increase equality in society.” With an increase of awareness that the climate, nature, and justice crises are all intrinsically linked amongst the climate and nature movements, this is a significant factor towards a just transistion.

Bolder still is the recommendation for the sharing of power, that people are actively involved in the decision-making  that affects their lives. The call is for a permanent national (UK-wide) Climate and Nature Assembly, to enable citizen participation and ongoing citizens’ assemblies at a local or regional level covering a range of topics.

The beginnings of a move to real democracy, a new direction made by people for people.

The call is to circulate the report as widely as possible to gather support for the recommendations. You could let your MP and councillors know about the report and urge them to use the report as guidance moving forward. This is a real opportunity for a genuine move towards environmental justice.

So far there is no clear indication of any governing bodies taking on these recommendations. We will be following the progress closely and keep you posted.

Find out more about the Environmental Justice Commission

Explore the full report: Fairness and Opportunity: A people-powered plan for the green transition