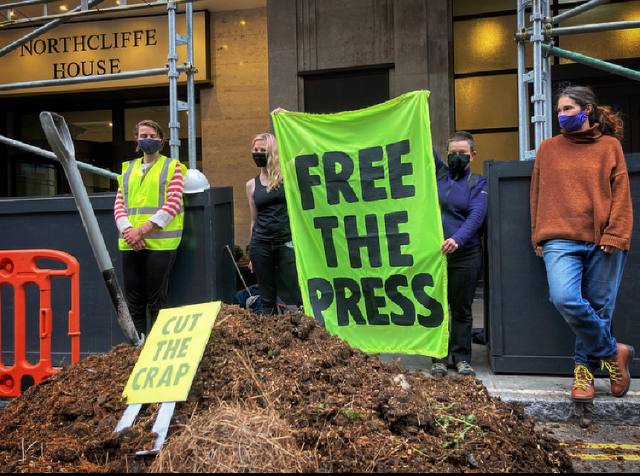 At 7am this morning, Extinction Rebellion made a surprise visit to the Daily Mail Group offices at Northcliffe House, where they dumped 7 tons of horse manure outside the main entrance. The action kicked off a day of protest, sending a message to the 4 billionaire owners of 68% of the UK’s print media – Rupert Murdoch, Lord Rothermere, Sir Frederik Barclay and Baron Evegeny Lebedev – to ‘cut the buillsh*t!’, demanding an end to media corruption that suppresses the truth from the public for profit.

The group left signs in the manure that read ‘CUT THE CRAP’ and held a banner that read ‘FREE THE PRESS’. The action will be followed by a march beginning at midday in Parliament Square and proceeding along the Southbank to the News UK Offices on Bridge Street. They will be joined by anti racist groups and organisations campaigning for media reform, such as Black Lives Matter groups and Media Reform Coalition.

The action was preceded by a police raid on the Extinction Rebellion Art Factory on Friday. The east London warehouse is used to make art for Extinction Rebellion actions and also supports Black Lives Matter, nurses groups and other protestors with banner making facilities. Four women making banners were arrested. [1] This was followed by a further police raid and three arrests at the Antepavillion art space in Haggerston which was exhibiting the bamboo structures used in Extinction Rebellion’s blockade of the Broxbourne printworks last year, despite the space and those arrested having no connection to Extinction Rebellion.

Sunday’s action comes 9 months after Extinction Rebellion blocked the entrance to the printworks on 5 September 2020, disrupting paper distribution for the day and sending a shockwave through the UK’s print media.[2] Since then, much has shifted in the media landscape, with many of the UK papers printed at Broxbourne claiming climate leadership while further contributing to delay and scepticism, and accusing climate activists of being ‘extremist nutters’ or ‘doomers’’.[3][4]

Gully Bujak of Extinction Rebellion, said: “For the British public, who’ve seen the criminal behaviour of this government and their ‘cronies’ throughout the pandemic, the conclusion must surely be clear: the arenas of power in this country are rotten, and where the billionaire-owned press is concerned – corruption is the business model. It’s time they cut the crap and stop acting as though they are providing a noble service to the public, while greenwashing the climate crisis and stoking the culture war to divide people.

“The need for a truly free press in Britain has never been more evident or urgent than it is today. Until the press is free, and those in power truly accountable, we cannot consider ourselves to live in a democracy, and without a functioning democracy, we cannot hope to survive the multiple and devastating crises heading our way.”

The September blockade of the Broxbourne printworks was followed by powerful voices, such as the Home Secretary and Prime Minister, calling the action an attack on democracy and tweeting that “a free press is vital in holding the government and other powerful institutions to account on issues critical for the future of our country, including the fight against climate change.” [5][6] However, a YouGov poll commissioned by Extinction Rebellion following the action found that only a minority of adults in the UK think we have a free press and the majority believe that the concentration of press ownership in the UK is unacceptable.[7] On the same day as the action, the Council of Europe issued the UK government media freedom alert for threatening press freedom when the government blacklisted a group of investigative journalists and denied them access to information. Russia and Turkey were both issued with warnings in that same week.[8]

For the climate and ecological crisis, corruption plays hand in hand with delayed action as vested interests steer the narrative. From the point at which Boris Johnson became Prime Minister in July 2019 to the end of September 2020, three of the billionaire press owners, and their representatives, had more meetings with ministers than all the rest of the UK media combined.[9] Prominent among those billionaires is Rupert Murdoch, owner of the Sun and the Times, who also sits on the board of oil and gas exploration company Genie Energy. [10] Rupert Murdoch’s son, James Murdoch, left News Corp over its systematic climate misinformation campaigns, including surrounding the 2019-2020 Australian Wildfires.[11]

The September protest was also able to highlight was the influence these four media owners have over democracy in the UK and the revolving door between the police, the mainstream media, and the government.[12] Only two weeks ago at the trial of 5 of the defendants involved in the September blockade, it was revealed that the Assistant Chief Constable of Hertfordshire Police ordered the removal of protesters from in front of the Murdoch owned printworks in Broxbourne on the say-so of the Home Secretary before he had received any information from the officers at the site.[12] This was followed by an apparent ‘IT glitch’ that saw text messages from Priti Patel to senior officers wiped from their phones, which lawyers argue means the defendants cannot have a fair trial because the extent of alleged political interference is unknown.[13] [14]

A spokesperson at Media Reform Coalition, said: “The Media Reform Coalition Report ‘Who Owns the UK Media?’ demonstrates the endemic problem of concentrated ownership across the UK media landscape. Concentrated ownership creates conditions in which wealthy individuals and organisations can amass vast political and economic power and distort the media landscape to suit their interests.

“Urgent action is needed both to remedy these high levels of concentration and to protect against further losses of media plurality and diversity. The coronavirus pandemic has made it clearer than ever how much we need accountable media institutions, run in the public interest, which help a divided society talk to each other and hold the powerful to account. Media institutions that act in the public interest, rather than the interests of politicians and governments, billionaire owners or powerful corporations. Without a media freed from corporate and government interests, democracy flounders and fails.” [15]

When corruption rules, the media is used as a mouthpiece for political influence. The papers politicise the climate and ecological crisis, encouraging readers to see it as a leftwing agenda, discouraging engagement with the crisis and preventing the conversation across the political spectrum about how to meet the challenges. Instead of outright denial, many of these papers have shifted their perspective into downplaying the severity of the risks we face and demonising those who speak out about it. Just last week the government’s own advisors, the Committee on Climate Change, said the UK government is failing to protect people from the fast-rising risks of the climate crisis, from deadly heatwaves to power blackouts.[16] This week it was revealed that IPCC scientists are preparing a landmark report warning of a series of thresholds beyond which recovery from climate breakdown may become impossible. [17]

Members of Extinction Rebellion also visited the building which houses the Telegraph this morning but were stopped by police before they could dump a further 7 tons.