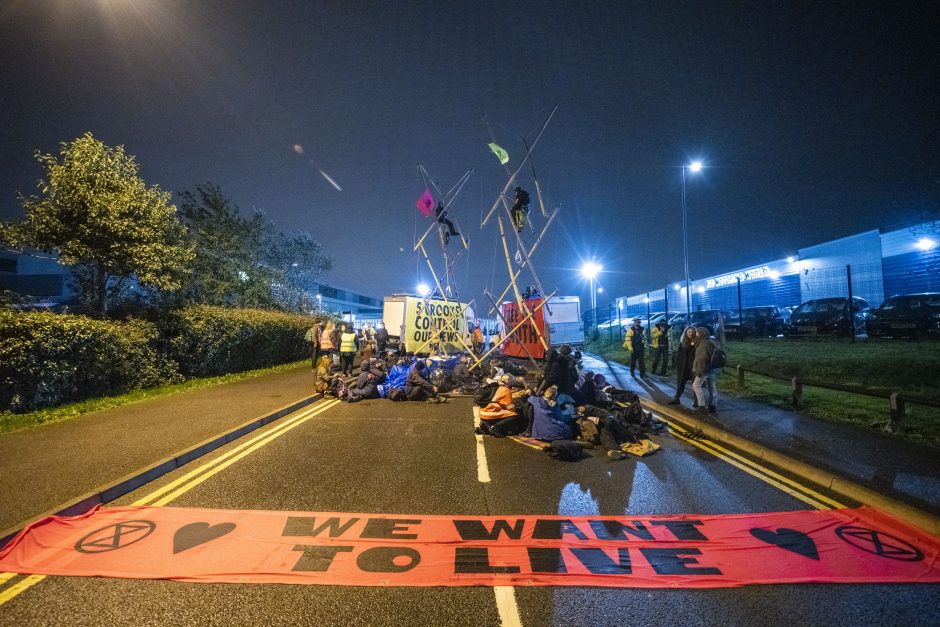 As the printing presses crank up, Extinction Rebellion groups in North London and Liverpool are taking on the titans of the media industry.

Nearly 80 people are currently blocking the roads leading to two printworks owned by Rupert Murdoch’s News Corp – Broxbourne outside of London and Knowsley near Liverpool.

The plan is to maintain the blockade throughout the night, using vehicles and bamboo lock-ons, in order to prevent these papers reaching newsstands on Saturday. People are holding banners that say ‘Free the Truth’ and ‘They want us divided / Stand Together.’

The groups are using disruption to expose the failure of these corporations to accurately report on the climate & ecological emergency, and their consistent manipulatIon of the truth to suit their own personal and political agendas.

But this is not the main story

The real story is that we’re stuck.

We’re not moving forward at the speed we need to turn the climate and ecological emergency around. We’re trapped somewhere between acceptance and the reality of just how bad the situation is. The right wing media is a barrier to the truth, failing to reflect the scale and urgency of the crisis and hold governments to account. Coverage in many of the newspapers printed here is polluting national debate on climate change, immigration policy, the rights and treatment of minority groups, and on dozens of other issues. They distract us with hate and maintain their own power and wealth, profiting from our division. We can’t move forward until this barrier falls.

The truth is being held hostage and so are we. We need to Free the Truth.

Extinction Rebellion activist, Gully Bujak, 27, says: “You cannot have a functioning democracy with a mainstream media that is ruled by a small, unrepresentative sect of society, who are in bed with politicians and the fossil fuel industry. The climate emergency is an existential threat to humanity. Instead of publishing this on the front page every day as it deserves, much of our media ignores the issue and some actively sow seeds of climate denial. They thrive off of polarisation and division. They sow hatred in order to distract us, actively profiting from this division.”

Amanda Stanley, 23, Liverpool, said: “The right-wing media have been spreading lies and creating divides for decades, from the Hillsborough disaster to the demonisation of asylum seekers, but the problem doesn’t end there. The entire institution of the media follows the same toxic rulebook, dehumanising marginalised groups and perpetuating inequality. It has become necessary to block lies in order to free the truth, thereby showing ordinary people that they are the ones with the power, not the elite minority that own the newspapers and run the country.”

Five billionaires are the majority voting shareholders for most of the UK national newspapers, with a combined weekly readership of 49million.[1] Three companies alone (News UK, DMG and Reach) dominate 83% of the national newspaper market (up from 71% in 2015).[2] This small group of extremely powerful people manipulate the media narrative to serve their own ends.[3]

The Sun and the Times are owned by Rupert Murdoch, whose media empire spans three continents. Murdoch has vast political power which he has used to undermine our democratic system: his media empire has backed every winning prime ministerial candidate since Margaret Thatcher came to power in 1979.[4] We can not have a free and open democracy while one person has so much control over our elections.

A famous climate denier, who sits on the board of an oil and gas company, Rupert Murdoch is known to intervene personally in the editorial output of his titles. He has been criticised by his own son for his businesses “ongoing denial” of the climate crisis.[5]

The Sun, along with the rest of the right wing press, continues to lobby for the expansion of the aviation industry and other polluting activities. Outside the UK, Murdoch’s flagship paper, The Australian has been widely condemned for running upbeat stories about picnics while bushfires, caused by global heating, ravaged the country.[6]

The UK is not the only country taking part. Several hours earlier, down under in Sydney, XR Australia lit the first beacon of media actions, by holding their own action, calling out the media bullshit, at News Corps’ HQ in Sydney.

Larissa Payne, Extinction Rebellion Sydney spokesperson said: “News Corp lie about the climate and ecological emergencies. They platform denialists, disseminate fake news and function as a mouthpiece of the fossil fuel industry. This creates a cesspool of misinformation in the public sphere, manufacturing consent for the mining industry and governments captured by fossil interest despite the majority of Australians wanting meaningful action on climate.

“We need courageous truth telling to prevent planetary collapse. If World War II could dominate front pages daily, if Covid-19 can make headlines, where the hell is the proportionate reportage on the climate crisis, the greatest existential threat to humankind?”

While much of the right wing press has moved away from complete denial, it continues to ridicule environmentalists and those sounding the alarm, while sewing doubt about the severity of the situation and opposing measures that would mitigate climate change.[7]

With the government preparing for a 4C of warming, it is failing to warn its readers about the staggering scale of the risks we face from runaway climate change, melting Arctic permafrost, the threat to our food supply and the possibility of a blue ocean event within the next 14 years. [8]

We need to stand up to these titans of the industry, push for change, and come together as a nation to have a sensible conversation about how we’re going to tackle this crisis together. We can’t wait for the government to make the first move. We need our media to lead the way.

Alanna Byrne of Extinction Rebellion, said: “We will only tackle the climate and ecological emergency by breaking the traditional impasse of oppositional politics and coming together, despite our differences. If we are to sort out this mess we’re in, the mainstream media must stop profiting from clickbait culture that is swimming in misinformation, that makes us hate our neighbours, suspect foreigners and vulnerable groups, and rally the nation into action. The media is an essential pillar of our democracy and has a vital role to play in communicating the multiple crises we face.

“We are calling on everyone watching this act of defiance to stand together in this moment and put our differences aside. The people who create division delight in our squabbles, feeding the chaos and distraction. We must free the truth.”

[3] Author, George Monbiot has said: “All billionaires want the same thing – a world that works for them. So how, in nominal democracies, do they get it? They fund political parties and lobby groups, set up astroturf (fake grassroots) campaigns and finance social media ads. But above all, they buy newspapers and television stations.

“The widespread hope and expectation, a few years ago, was that news controlled by billionaires would be replaced by news controlled by the people: social media would break their grip. But social media is instead dominated by stories the billionaire press generates. As their crucial role in promoting Nigel Farage, Brexit and Boris Johnson suggests, the newspapers are as powerful as ever. They use this power not only to promote the billionaires’ favoured people and ideas, but also to shut down change before it happens.”: https://www.monbiot.com/2019/07/08/owned/

[8] Some stories that should have made front page news but went unreported in the right wing press: