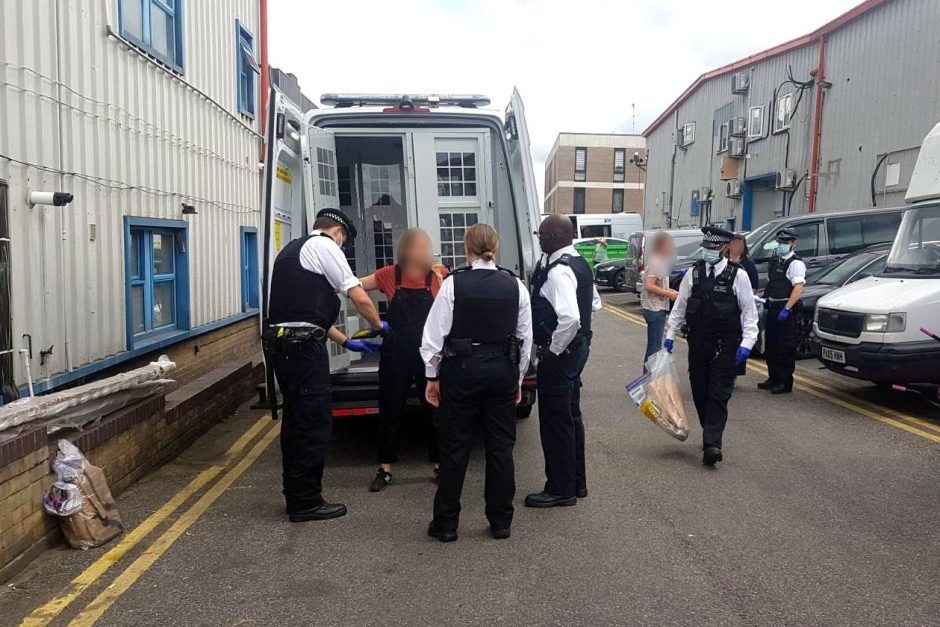 This is what happens when people take action against the corrupt, billionaire-owned “free press”. We have to wonder what it is about art that’s so threatening? Can we be sure Rupert Murdoch hasn’t been on the phone to the Home Secretary demanding she shut our protests down after her ‘Priti’ dodgy behaviour on the night of the September 5th blockade of the Broxbourne printworks?[2] Is this a move to – dare we suggest it – suppress free speech?

The Free the Press march, which begins at midday on Sunday in Parliament Square, highlights the fact that four tax-avoiding, climate sceptical billionaires – Rupert Murdoch, Lord Rothermere, Sir Frederik Barclay and Baron Evegeny Lebedev – own 68% of the UK’s print media, manipulating the truth and sewing division among the general public for profit.[3]

Nuala Gathercole Lam, from Extinction Rebellion UK, said: “This is what happens when you take peaceful protest action to the true centres of power in this country.

“Four billionaires control the lion’s share of our news and it affords them a vast corrupting influence over democracy. Not only have they become kingmakers in our elections, but they are standing in the way of a national conversation about how we meet the vast challenges the climate and ecological crises present for everyday life. They claim to stand for freedom of speech and open debate but they deprive their readers of information needed to take part in the discussion. They avoid paying tax while their papers tell us we can’t afford to cut carbon emissions.”

The weekend of actions comes nine months after Extinction Rebellion blocked the entrance to the Murdoch-owned printworks on 5 September 2020, disrupting paper distribution for the day and sending a shockwave through the UK’s print media.[4]

The September blockade was followed by powerful voices, including the Home Secretary and Prime Minister, calling the action an attack on democracy and tweeting that “a free press is vital in holding the government and other powerful institutions to account on issues critical for the future of our country, including the fight against climate change.”[5][6]

However, a YouGov poll commissioned by Extinction Rebellion, following the action, found that only a minority of UK adults believed we have a free press and the majority believe that the concentration of press ownership in the UK is unacceptable.[7] On the same day as the action, the Council of Europe issued the UK government media freedom alert for threatening press freedom when the government blacklisted a group of investigative journalists and denied them access to information. Russia and Turkey were both issued with warnings in that same week.[8]

It’s time to Free the Press.

[3] 4 billionaires own our news: https://www.newstatesman.com/2021/02/four-men-own-britain-s-news-media-problem-democracy