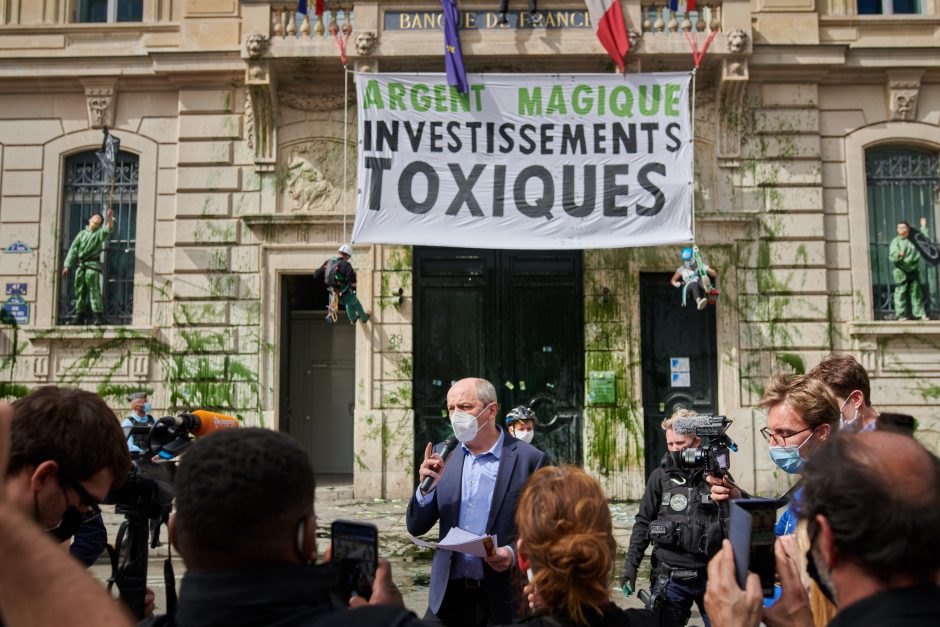 FOR IMMEDIATE RELEASE: XR’s Money Rebellion, drawing from the long history of demanding justice via nonviolent civil disobedience, is a sustained campaign to expose the political economy’s complicity in the climate & ecological emergency. [1] Participating activists worldwide are aligned on a core set of Demands, and uphold XR’s goal of reclaiming democracy through widespread adoption of Citizens’ Assemblies [2] to safeguard what people need over what corporations want. XR’s Global Action Network, in coordination with Money Rebellion, hosted the recent actions, spanning countries which are home to some of the richest and deadliest financial institutions, calling out the guilt of the banking sector [3] (and specifically Central Banks in Paris, Brussels, London, Rome, and New York) [4] for the climate and ecological devastation they directly cause with their increasing funding, subsidising, and bailouts of toxic industries.

We demand governments, banks, and other political, economic and financial institutions:

Tell the truth about our global economic system which creates staggering inequity, distorts priorities and causes harm. Financial institutions must fully disclose the social, climate and ecological impacts of funding, so it is clear who is paying the true cost.

Champion Citizens’ Assemblies at all key levels, including global, with mandates to design a fair and just economy in service to all people and life on earth.

With these actions, XR’s Global Action Network and Money Rebellion [5] are highlighting the deadly role of banks in what is a suicidal economic system that, by design, financially incentivises harm to biodiversity, the climate, and our future. This system is addicted to infinite growth, and more growth means more fossil fuel use, more resource extraction, more deforestation, more consumption, more material throughput, and more waste. XR Belgium’s Wil expands on this point: ‘Because they uphold the dogma of growth, banking and financial industries are to be blamed for the destruction of life on earth. Their managers and shareholders must be accountable to humanity sooner or later. It is urgent to stop this obsession with growth in all its shapes and sizes. The preservation of life on earth is at stake.’

The banking sector’s participation in genocidal investments is irrefutable. Positive Money’s 31 March report [6] shows that instead of using the COVID pandemic ‘in a way that supports the transition to a more sustainable and just society, central banks have propped up a financial system that is facilitating climate change, ecological destruction, and a higher risk of pandemics’. Calculations released last week by Rainforest Action Network (RAN) revealed that the top 60 banks have spent an eye-watering $3.8 trillion on fossil fuels since the 2015 Paris Accords, and their 2020 investments oustrip those in 2016 or 2017. Moreover, RAN cites that ‘not a single “high impact” policy has been implemented by any G20 monetary or prudential authority’. This is beyond failure: this constitutes outright crimes against humanity and the planet. What renders these decisions even more senseless is the fact that compared to the mere 59% return over 10 years earned by fossil fuel investment, green energy boasts a 422.7% profit [7] over the same time period.

XR’s Global Action Network and Money Rebellion will continue to spotlight banks and other entities that are driving extinction in order to amplify the existential threat they pose to all life by prioritising short-sighted, short-term profits over long-term survival. Banks are, after all, not at all alone in the noxious network of planet-killing profiteers.

As Frack Free Namibia activist and XR ally Ina-Maria Shikongo outlines: ‘RECONAfrica is currently drilling and putting our water aquifers at risk, and it could lead to great regional trouble, especially around the Okavango Delta: all those communities will be impacted. Where will they get their water from? Now water is going on the stock market, so it’s a total genocidal action towards Indigenous and rural communities globally, because you are stealing this resource from us. Water is a fundamental human right, you can not put it on the stock market.’

By continuing to fund climate and biodiversity destruction, our governments [8] and banks [9] have demonstrated they can be trusted with neither our money nor our lives. In the very midst of a global pandemic, bailing out fossil fuel industries and lowering environmental standards were preferable to protecting ordinary citizens, [10] despite the IMF’s own warning in 2019 [11] that ‘there is growing agreement between economists and scientists that the tail risks are material and the risk of catastrophic and irreversible disaster is rising, implying potentially infinite costs of unmitigated climate change, including, in the extreme, human extinction.’

In a recent paper [12] he has co-authored, University of Cumbria Professor Jem Bendell asserts: ‘There is no way out of our COVID debts within this monetary system, unless we speed up our consumption and destruction of ecosystems which then increases the risk of future pandemics. It’s a debt Catch-22 that we will only escape with monetary reform. The deaf ears of politicians on this matter is why some people think a Money Rebellion has become necessary’.

Dr. Gail Bradbrook, Extinction Rebellion co-founder, said: “Our leaders are not pushing for rapid action, they are ignoring the science–targets are inadequate and aren’t being met. We are on a path towards the collapse of our civilisation–with billions dying in our children’s lifetimes, according to some scientists. Those who are failing to lead adequate action on the climate and ecological crisis are committing Crimes Against Humanity.”

While not a direct supporter of Money Rebellion, Professor of Climate and Environmental Change at University of Exeter, Stephan Harrison [13] recently said: ‘There is nothing magical about reducing carbon dioxide in the atmosphere. We just don’t have the political or economic will to do this’. Money Rebellion is committed to addressing this lack of our “leaders’” will, because without it, life–both as we know it and on this planet–is endangered indeed.

People can find out more about Money Rebellion and how they can support / get involved here. [14]