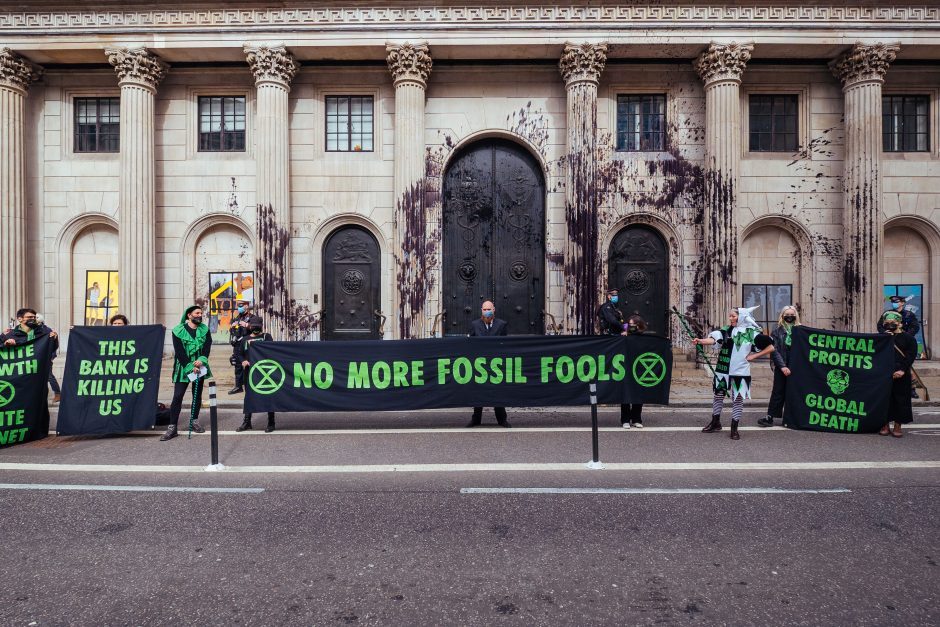 This morning in an elaborate April Fools prank two members of Extinction Rebellion dressed as the ‘Fossil Fools’ who are recklessly endangering our future for profit – sprayed the front of the Bank of England with fake oil. Others held a banner outside that read ‘No More Fossil Fools’.

The action today is part of a wave of actions by XR’s Money Rebellion designed to expose the role of banks in the climate and ecological crisis. The world’s 60 largest banks have funded the fossil fuel industry to the tune of $3.8 trillion since 2016 [1]. The action today highlights the Bank of England’s failure to regulate these banks and points to the fact that it still holds investments consistent with 3.5C of warming by the end of the century. [2]

Despite the Bank’s stated commitment to a green recovery from the impacts of the Covid pandemic, a report by Positive Money found that by June last year 56% of Covid funding distributed by the bank went to carbon intensive industries, including airlines, car manufacturers and oil and gas companies. [3] Andrew Bailey, Governor of the Bank of England, pointed to the Covid pandemic as a reason for deprioritising commitments to tackling climate change, instead of using the opportunity to transition the Bank’s activities away from carbon intensive industries. [4]

In March this year the Bank of England was given an additional mandate by the Government to take environmental sustainability and reaching net zero emissions into account in its activities. However, they are yet to lay out how they will go about this. A report released in March this year by the pressure group Positive Money found that “rather than responding to the current crisis in a way that supports the transition to a more sustainable and just society, central banks have propped up a financial system that is facilitating climate change, ecological destruction, and a higher risk of pandemics.” [5]

Other Extinction Rebellion groups across the UK are targeting private banks today – including in Glasgow, Brighton, Cambridge and Cornwall – while globally there are protests in cities including Paris, Brussels and Melbourne.

Amelia Halls, 22, from Stanford who was one of the ‘fossil fools’ who sprayed the Bank with biodegradable fake oil, said: “It is terrifying taking action like this, but not nearly as terrifying as what my future could look like if we continue on our current course, and the Bank of England is complicit in that.

“It is not okay that the Bank of England can distribute money to companies that are destroying our planet whilst millions face the destruction of their future because of their actions.

“The government is doing everything they can to greenwash themselves when at the same we have a financial system in this country that is actively financing companies and institutions that are destroying the planet. Their disregard for the lives of every person on this planet will not go unchallenged.”

Robert Wheeldon of Extinction Rebellion, said: “The Bank of England has failed utterly in its duty to regulate giant funders of fossil fuels like Barclays and HSBC. The climate crisis will never be averted if big banks, whose only concern is profit, are left to their own devices. The Bank of England needs to make it impossible for UK banks to keep funding the fossil fuel industry and nature destruction.

“What drives this suicidal inaction is our economic system. Addicted to infinite GDP growth and ever-increasing profits for the rich, this system requires more burning of fossil fuels, more resource extraction, more deforestation and more consumption. The multiple crises that we face – climate change, inequality, overconsumption of the planet’s resources – cannot be addressed without changing the system that drives them.”

Clarissa Carlyon of Extinction Rebellion, said: “We are here today to celebrate our national bank’s unwavering commitment to furthering climate and ecological breakdown. Not only are they creating sacrifice zones and destroying precious eco-systems by funding the extraction of fossil fuels, but they are also ensuring as much carbon as possible is added to our earth’s atmosphere by handing out money to the companies that burn them – a brilliant double-whammy!

“And to underpin all of this, our Bank of Extinction is insistent on propping up an economy based on infinite growth, meaning that the ordinary citizen can sit back, safe in the knowledge that short term profits remain the priority over minor concerns such as health, sustainable jobs or a livable future.

“We can rely on our Bank of Extinction to hasten our destruction!”

[3] THE COVID CORPORATE FINANCING FACILITY Where are the Conditions for the Billion £ Bailouts?​​​​​​​http://positivemoney.org/wp-content/uploads/2020/07/CCFF-Final-version.pdf