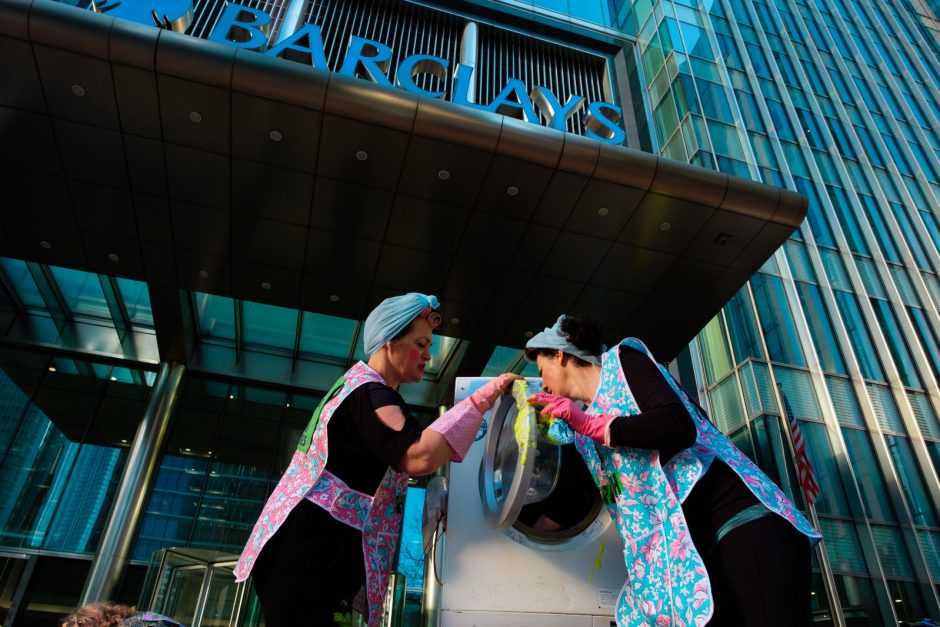 This morning Extinction Rebellion Dirty Scrubbers took their theatrical protest to Barclays Bank headquarters in Canary Wharf with a letter to the bank demanding it ‘clean its act up!’ The scrubbers were armed with a ‘wobbly washing machine’ and a bubble machine. They washed the blood, oil, and greenwash out of Barclays’ dirty money and cleaned the black carbon out of Barclays’ arctic exploration in a theatrical performance designed to highlight the role of banks in the climate and ecological emergency.

The performance today is part of a wave of actions by XR’s Money Rebellion designed to expose the role of banks in the climate and ecological crisis. [1] According to a report published by a coalition of NGOs last week, the world’s biggest 60 banks have funded fossil fuel companies to the tune of $3.8tn since the Paris Climate Agreement was reached in 2015. The report found that Barclays is currently the bank providing the largest sums of money to finance fossil fuels in Europe and has increased its investment in fossil fuel expansion, fracking, coal, arctic and offshore oil and gas, and tar sands since 2015. [2]

The performance also sought to highlight the disproportionate impact the climate and ecological emergency is likely to have on women, particularly poor women, BIPOC women and women in the global south. The International Panel on Climate Change found that “gender inequalities are further exaggerated by climate-related hazards, and they result in higher workloads for women, occupational hazards indoors and outdoors, psychological and emotional stress, and higher mortality compared to men.” [3]

The Scrubbers delivered a letter to Barclays highlighting their complicity in the climate and ecological crisis. [4] The letter demanded that the bank:

One of the Scrubbers and a member of Extinction Rebellion, Sophie Miller, 48, said: “We are here today as the Dirty Scrubbers to raise awareness about our banks’ contribution to the climate and ecological crisis by helping Barclays Bank clean up their dirty act. And it is truly filthy. Banks have invested a staggering $2.7 trillion into fossil fuels since the Paris climate agreement. Barclays, the biggest funder of fossil fuels in Europe, has invested £145 billion in fossil fuels in that time.

“All this is taking place in a climate emergency when even the former Govenor of the Bank of England, Mark Carney has called for systemic change. Barclays are directly responsible for the destruction of the living world by funding fracking, arctic oil and gas extraction and industrial animal agriculture. We have delivered a letter today with a clear demand to the bank to act now.”

Cazzie Wood, 52 from South Wales, a forest school leader and youth worker who also took part in the action, said: “Barclays must clean up its act immediately; the financing of fossil fuels is a death warrant directly affecting the lives of the thousands of children and young people I have worked with. Today I represent every single one of them.”

We are writing today on behalf of all women; your daughters, granddaughters, grandmothers, mothers and sisters. We call on you to take immediate, meaningful action to prevent catastrophic climate change and ecological breakdown.

Five years have passed since the Paris Agreement was adopted, when a line in the sand was drawn that should have indicated a real beginning to serious, concerted action.

A report published last week shows Barclays spending was higher in some sectors last year than in the year immediately following the Paris agreement, including increased investment in fossil fuel expansion, fracking, coal, arctic and offshore oil and gas, and tar sands. [1]

Your current spending trajectory is the polar opposite of what is needed to meet your stated commitment to align your “entire financing portfolio to the goals of the Paris Agreement, with specific targets and transparent reporting, on the way to achieving our ambition to be a net zero bank by 2050”. A paper published in Nature Climate Change this January says that we are already committed to 2oC of warming, meaning that your current “commitment” is nowhere near ambitious enough. [2]

In addition to climate breakdown, our planet is in the midst of a major mass extinction event, the first of its kind caused by humans. You are actively bankrolling this process. In 2019 Barclays financed activities linked to biodiversity risk to the tune of over £70 billion. [3]

The global transformation needed can only be achieved if banks such as yourselves put your collective weight behind the drive towards a sustainable and habitable earth. It’s time for you to choose which side of history you wish to be on. We therefore demand that you:

We can no longer stand by and watch your wanton destruction of our beautiful Mother Earth for the financial gain of a few. We request a public, positive response to our demands immediately.

Yours in hope and on behalf of women everywhere.