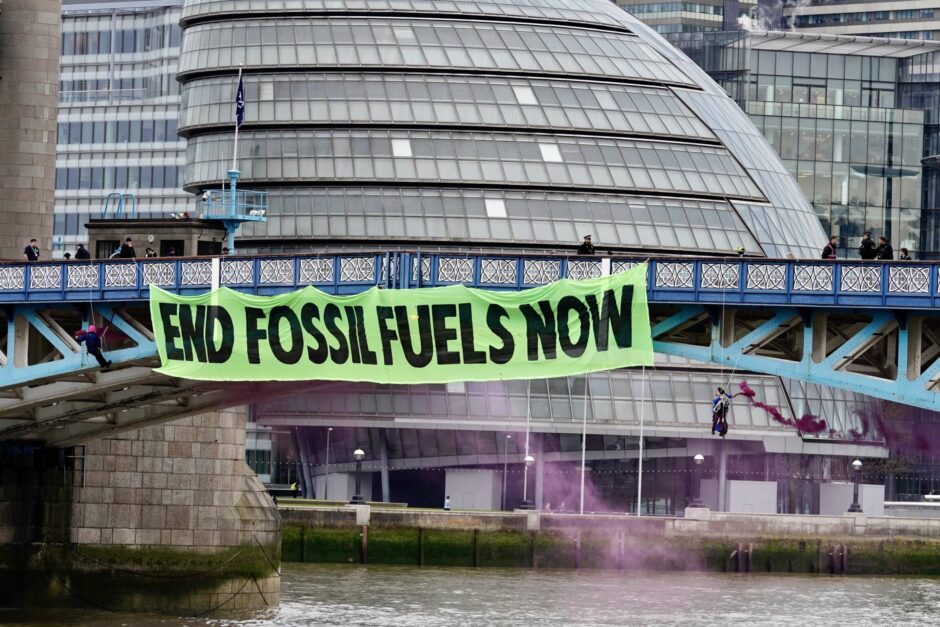 At 7am this morning, Extinction Rebellion UK hung a large 22m x 3m banner from the suspension part of Tower Bridge in London that read ‘END FOSSIL FUELS NOW’. Two people are hanging from the bridge by suspension cords and have released red flares. The bridge is currently closed to traffic.

The action has taken place at the gateway to the City of London – the root source of fossil fuel funding in the UK – and on the eve of the April Rebellion which begins tomorrow at 10am in Hyde Park. People will gather at Speaker’s Corner every morning for a week or more at the same time, where there will be regular trainings in nonviolent civil disobedience and resistance tactics before marching into London to block areas of the city for as long as possible.

Amy Rugg-Easey who is taking part in the action today, said: “I ask myself why I do these things all the time, and the main thing that drives me is that I have tremendous hope and optimism in humanity’s ability to fight the climate crisis; but there are certain people who continue to prevent that for their own profit. When I volunteered during the COP26 climate conference in Glasgow last year, I learnt from members of indigenous communities from the Amazon rainforest that companies destroying their home are doing it to extract oil, and some of the indigenous environmental campaigners had been killed while defending their home. Some of the banks and companies continuing to fund, insure and endorse these projects are based here in London, where those communities cannot reach them, but I can, so I will do what I can to help.”

The action is planned to continue until the UK Government agrees to implement Extinction Rebellion’s immediate demand: to end all new fossil fuel infrastructure immediately. It comes after 8 days of continuous disruption at oil facilities by Extinction Rebellion and the Just Stop Oil coalition, where oil depots have been blocked across Birmingham, London and the South West, resulting in fuel shortages in parts of the UK.[1] Scientists and doctors for Extinction Rebellion have also been arrested this week in a plea to make the world listen.[2]

Peter Kalmus, a scientist at NASA, was arrested in California on Wednesday as part of a day of action with Scientists Rebellion, stated in the Guardian: “The science indicates that as fossil fuels continue to heat our planet, everything we love is at risk. For me, one of the most horrific aspects of all this is the juxtaposition of present-day and near-future climate disasters with the “business as usual” occurring all around me. It’s so surreal that I often find myself reviewing the science to make sure it’s really happening, a sort of scientific nightmare arm-pinch. Yes, it’s really happening.”[3][4]

It takes place as the UK government reveals its energy strategy, in which the Chancellor Rishi Sunak, has asked the Bank of England to support investments in the North Sea, contradicting the government’s Net Zero strategy.[5] A leak also revealed that the Chancellor blocked plans for an increase of the energy bill rebate that would help struggling families.[6]

Amelia Halls, 23, of Extinction Rebellion, said: “It should come as no surprise that people are choosing to take action like this. Scientists are telling us that we cannot continue to invest in fossil fuels if we want to have a livable planet, and are risking their freedom to make the government listen. But rather than listening to the science, the government’s new energy strategy doubles down on oil and gas extraction in the North Sea.

“While people will struggle to pay their energy bills, energy companies make record profits. This opportunism is criminal, and shows disgusting disregard for the needs of ordinary people. Well, not in my name. I will not be a bystander any longer, and neither should anyone else who believes in a better world.”

For this Rebellion in London, there will be a decisive shift in tactics from nonviolent civil disobedience to civil resistance, meaning we will no longer ask the government for change, but continue to put ourselves in the way of the government causing more harm. There won’t be the use of big pink boats, tables or large infrastructure that restricts action to certain areas. This Rebellion will centre ‘people power’ at its core, encouraging everyone to take part in nonviolent civil resistance tactics, where we will take action together, and be adaptable and agile to the response. We’ll be easy to find, easy to join, disruptive and impossible to ignore.

Mass outreach will be a key element, with a plan to go into communities and engage with people face to face about the crisis we face, encouraging people to join talks and get involved to build towards an even bigger Rebellion moment later in the year.[4]

Gully Bujak of Extinction Rebellion, said: “Four days ago I watched the UN Secretary General give a statement which should frighten us all. What was terrifying was not the science – that has been stark for decades and we have ignored it – but the plea. Here was Antonio Guterres, in his suit, in front of his United Nations backdrop, saying in plain language that politics has failed, and calling for the people to rise up. Yesterday I watched NASA scientist Peter Kalmus in tears as he locked himself to the doors of JP Morgan in LA. What more do you need to see? What more do you need to hear? This is the moment of truth, the moment you decide what kind of person you are, what kind of future you want, what or who you’re prepared to fight for. Come and sit down with us. It’s now or never.”