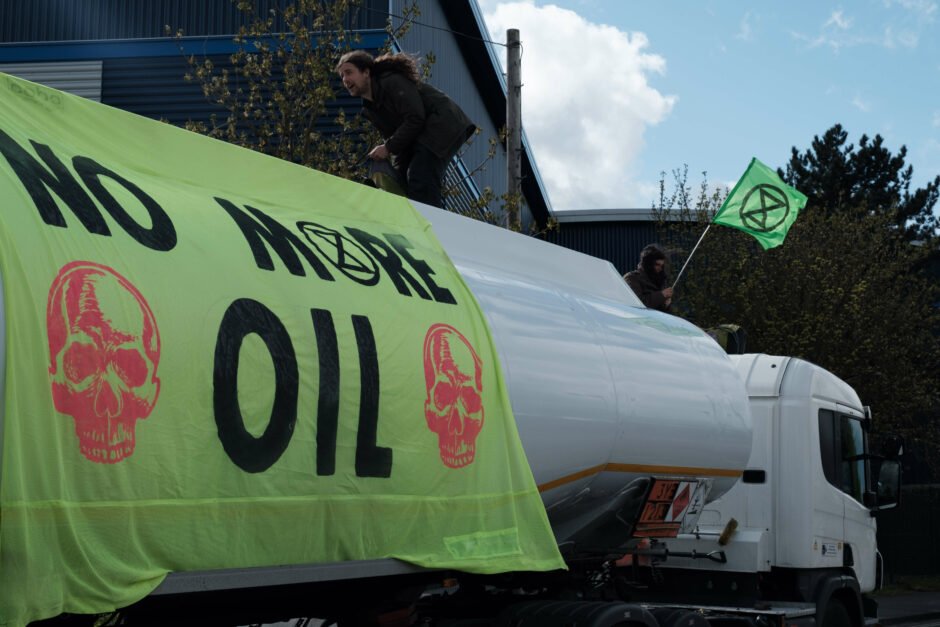 Just before 3pm this afternoon, Extinction Rebellion have returned to the Esso West oil terminal in West London as the 7th day of action at oil facilities around the UK takes place.

4 people have climbed on top of 2 oil trucks as they attempted to leave the terminal to deliver fuel to petrol stations in the South West. Everyone is locked on to the truck using concrete tubes and they have draped banners across the trucks that say ‘NO MORE OIL’ and ‘END FOSSIL FUELS NOW’.

The group intends to stay for as long as possible. The action is taking place as the Just Stop Oil coalition also block oil refineries with 25 young people occupying Navigator Terminal, the largest in the UK, and 19 people are blocking West Thurrock Way.

The groups will continue to block oil refineries until the government agrees to end all new fossil fuel investments.

Alanna Byrne of Extinction Rebellion, said: “It should come as no surprise that people are taking action like this, that they feel they have to seek collective empowerment when faced with the contradiction of the IPCC report warning of global annihilation due to the continued use of fossil fuels, while the government continues to seek fossil fuel expansion and support corporate interest over people’s lives and livelihoods.

“Many of those involved in these actions are young, they know what they face and what people around the world are facing already, and they’re not going to be bystanders while they are continuously lied to by their own government about climate inaction. Scientists are telling us it’s now or never, so if the government won’t act like that’s the reality then we will.”

Just yesterday the latest IPCC report came out and the media barely noticed. The Secretary General of the United Nations, Antonio Guterres put it bluntly in his speech: “The jury has reached a verdict. And it is damning. This report is a litany of broken climate promises. It is a file of shame, cataloguing the empty pledges that put us firmly on track towards an unlivable world.

“This is not fiction or exaggeration. It is what science tells us will result from our current energy policies. Some government and business leaders are saying one thing – but doing another. Simply put, they are lying. And the results will be catastrophic.”

Leaders must lead, but all of us can do our part. We owe a debt to young people, civil society and indigenous communities for sounding the alarm and holding leaders accountable. We need to build on their work to create a grassroots movement that cannot be ignored. If you live in a big city, a rural area or a small island state, if you invest in the stock market, if you care about justice and our children’s futures I am appealing directly to you. Demand an end to all fossil fuel subsidies.”

The disruption at oil facilities in the UK is a preface to the Rebellion beginning in London on April 9th. Extinction Rebellion is calling on everyone watching the current protests to join them at Hyde Park on the day at 10am to finally bring an end to fossil fuels. We will return to the streets day after day until our immediate demand – for the UK government to immediately end all new fossil fuel investments – is met. Find out more about the Rebellion here.

For more information on this week’s action, see here and here.