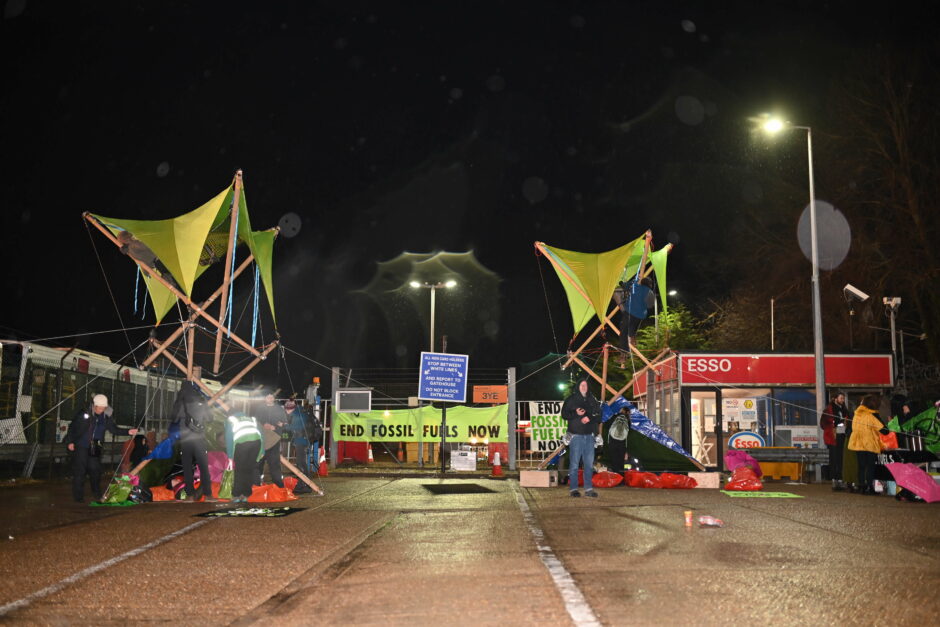 At 4am this morning, Extinction Rebellion returned to the Esso West oil facility near Heathrow Airport in London. They are currently blocking the entrance with 2 bamboo structures and around 30 people. They are using 2 large banners that say ‘Join Us – London 9th April’ and ‘Stop Fossil Fuels Now’.

This is the fourth day in a row in which oil facilities across the UK have been blocked as part of ongoing action by Extinction Rebellion and the Just Stop Oil coalition. Over the weekend Just Stop Oil continued to block oil depots in Grays, Purfleet, Buncefield, Tamworth and Central Birmingham.

We will continue to block oil facilities until the government agrees to stop all new fossil fuel investments immediately.

Andrew Smith from Extinction Rebellion said: “We’re here to say that climate action cannot wait. Right now, governments are choosing to exploit the crisis in Ukraine to hand out oil licences and continue the fossil fuel economy that’s destroying us. They are exploiting public fear and disorientation at a time of crisis when people’s bills are going up to advance corporate-friendly policies incapable of attracting democratic support.

“The reality is, the UK public wants faster action on climate as the energy crisis hits. We know what is happening and what needs to be done – by acting in favour of corporate interest over the will of the people, the government is showing contempt for the people who elected them. How long ago did our Prime Minister say COP26 was our last chance to save humanity? And now they’re sidelining climate policy once again. This is not living in reality.”

The action continues as the disruption begins to be felt at petrol pumps. Over the weekend, there were reports that petrol stations were empty with people asking whether there was a fuel crisis.

The latest IPCC report which is due today is predicted it may be delayed as scientists accuse governments of trying to water down their findings, with many scientists urging an end to fossil fuels. The IPCC report which came recently tells us in no uncertain terms that the window is closing on adaptation – let alone mitigation. It also states that staying on fossil fuels means that half the population of the continent of Africa could be displaced within the next eight years. African countries have not caused this crisis.

Charlie Gardner of XR Scientists, said: “Just a month ago, the world’s scientists warned that we have a brief and rapidly closing window to secure a liveable future. Yet, incredibly, the media paid it almost no attention and our government continues to double down on our addiction to fossil fuels. There really could be no more serious warning, and we absolutely need to take emergency action.”

The disruption at oil facilities in the UK is a preface to the Rebellion beginning in London on April 9th. Extinction Rebellion is calling on everyone watching the current protests to join them at Hyde Park on the day at 10am to finally bring an end to fossil fuels. We will return to the streets day after day until our immediate demand – for the UK government to immediately end all new fossil fuel investments – is met.

Find out more about the Rebellion here.