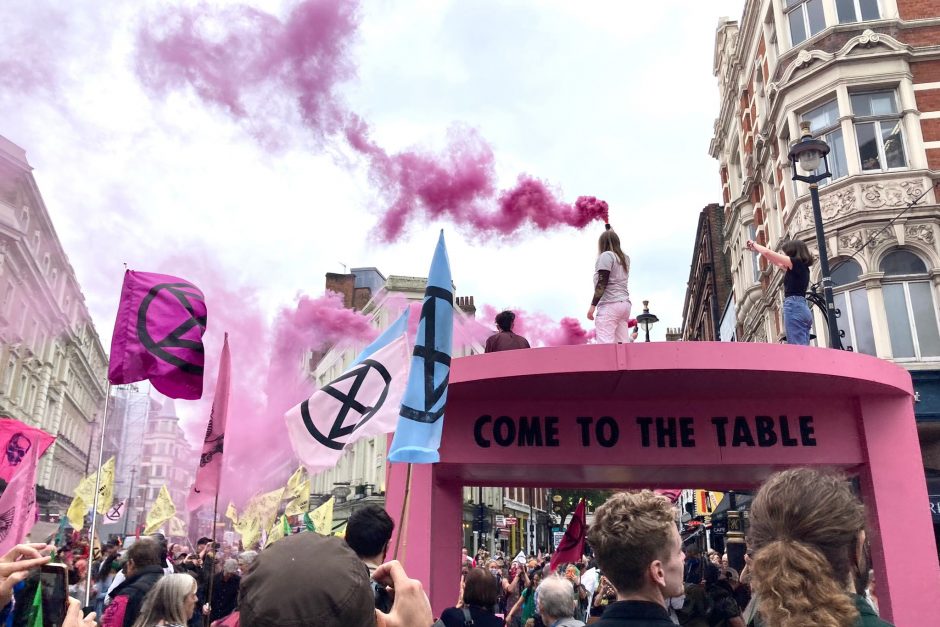 As the Impossible Rebellion kicks off, rebels gather around a giant pink table and take action together.

(To find out what’s going on this week, see the plan and join the Rebellion Broadcast Telegram group)

It’s been a thrilling, tiring, sobering and inspiring day – we can confirm: Rebellion’s back!

After almost a year apart, you might have forgiven rebels for a slow start – but Monday saw no time wasted. Between joyful reunions and welcomes, rebels held a rally, staged a march, and caused significant disruption with the help of a brand new pink behemoth.

And that was just the rebels in central London! Read on to learn about the warming, well-run campsite on the other side of London, and the brilliant exploits of Digital Rebellion on the cyber-streets.

It’s always exciting to bring our creativity, enthusiasm and compassion together – but it’s also tragic that our action is as necessary as it ever was. This summer has seen the IPCC’s frightening ‘code red for humanity’, another catastrophic wildfire season, and apocalyptic droughts affecting millions in Syria, Argentina, and the world at large. The rapidity with which our life-support systems are contorting has shocked even seasoned climate scientists. We need action from our leaders now.

But, we are not seeing action from our leaders. The UK government is – by its own admission – failing to meet even its ecocidal 2050 target for net-zero. This is no different from the broader global picture, which is way off track for the Paris Agreement. As Greta put it in another blistering talk to world leaders, we’re seeing “acting” instead of action!

All of which means the stakes are high for COP26 in November. The fate of hundreds of millions – the fate of this planet – hangs in the balance; and with the UK as the summit’s host, our government could play a decisive role. Whether it plays this role will not be decided off the cuff – the negotiation plans are being drafted now. If you want a good outcome from COP26, now is the time to act.

So please do get involved in any way you can. If you’re in or around London, check out our full rebellion guide and timeline; if you’re further away, check out the inimitable Digital Rebellion. Or, if you don’t have time for either of these things, please donate what you can.

This Rebellion needs your support. Anything you can give is appreciated.

The Impossible Rebellion kicked off in Trafalgar Square with all the colour, energy and compassionate determination that XR is known for. It might have been almost a year since our last nationwide action, but we haven’t lost our magic!

Hundreds gathered at 10 am to dance, listen to fiery and informative speeches, and to witness the unspeakable power of four samba bands.

With numbers swelling all the time, the next step was a march which headed jubilantly up to Cambridge Circus before – jubilantly – stopping. After 10 patient minutes, the reason for the wait became clear – and stood towering above the traffic lights at a multi-way junction in Covent Garden.

It turned out that the march had functioned as a decoy, leading police far away as a small team of rebels positioned and deployed a structure. 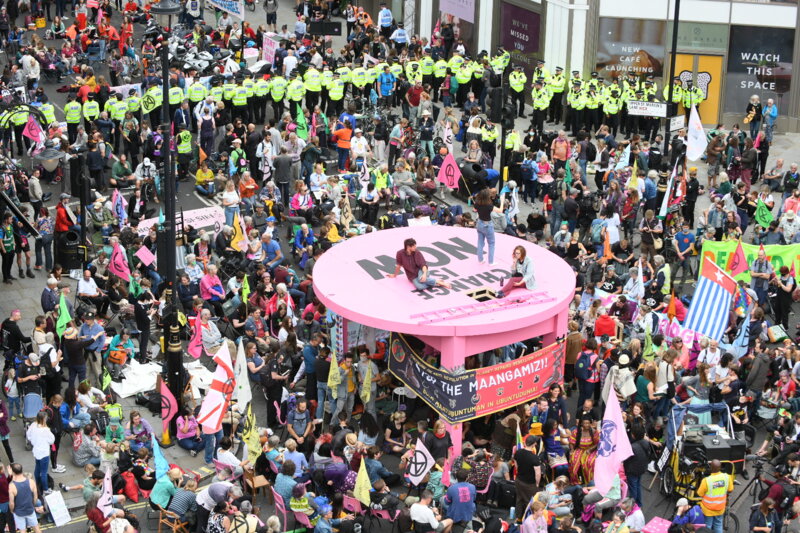 Also known as the BFT, The Table represents our open invitation to engage in deeper democracy

Come to the Table!

Right on cue, the marchers converged on the site in time to protect and be amazed by The Table. Under its majestic pink legs a fresh round of speeches, samba-fuelled dance and singing started. Over twenty brave rebels positioned themselves in strategic lock-ons through the legs of the Table and onto vans to hold the roadblocks.

Rebels set up a slew of matching pink chairs in the road, helping to symbolise the dialogue we need about the climate crisis, calling all to take a seat at the table – but also coming in handy for a game of musical chairs!

As this went on, police swiftly cordoned the six roads into the site. The walls of officers refused entry, but allowed people to leave. These lines could not contain the vibes, however: samba bands at several entrances played out to crowds across cordons, just a few feet away. Further down these roads, much smaller pink tables invited curious passers-by to join in ‘Crisis Talks’ with rebels and share their own perspectives on the intersecting crises we face today.

As evening fell, growing numbers of rebels had to leave and couldn’t be replaced through the police line. With a smaller crowd to bear witness, police began to clear the site aggressively: yanking rebels off their chairs, ripping glued-together rebels apart, and carrying them off in handcuffs.

Despite this, spirits were still high as day turned to night, buoyed by disco beats and a steely resolution to hold the site until morning. At the time of writing (4:30 am), The Table is still standing proud.

On a rainy Sunday evening, three rebels scaled the Guildhall to launch the Impossible Rebellion with a red flare and a banner that read ‘Co-liberation / Freedom Together’. Guildhall is the governing centre of the City of London Corporation, an entity that is responsible for a whopping 15% of global emissions. If it were a country, it would be the 9th biggest polluter in the world. An appropriate venue, then, to start our next phase of rebellion!

Rebels carried a coffin in a funeral procession through the rain, and a crowd gathered to hear speakers and to demand that the government end subsidies to fossil fuel companies. The rebellion begins on 23rd August, the 230th anniversary of the Haitian Revolution and the International Day for the Remembrance of the Slave Trade and its Abolition. Speeches highlighted the City of London’s key role in financing the slave trade and its history of complicity and moral bankruptcy.

Our 2 main targets: Barclays and the Bank of England.

Yesterday, on the first day of the rebellion, we targeted Barclays. We made hundreds of calls and posts on their social media pages, all day long. Constant pressure is key. (We await their public statement with bated breath so we can call them up some more.)

No need to be a social media whizz or an IT specialist! We’re all crew, pulling together to demand the impossible and rebel from anywhere.

Rebels have pitched their tents at a site near Greenwich and have been generating a lot of interest from the area. In fact, they’ve had so many people coming to the camp that they’ve had to ask the XR Greenwich group to send extra volunteers to bolster their outreach capacity!

Generally, visitors have been very supportive and frequently ask what they can do or give to help the campers. Many interesting and productive conversations about the state of the planet have been enjoyed onsite, and some families have even inquired about bringing their children along to join in painting and art. 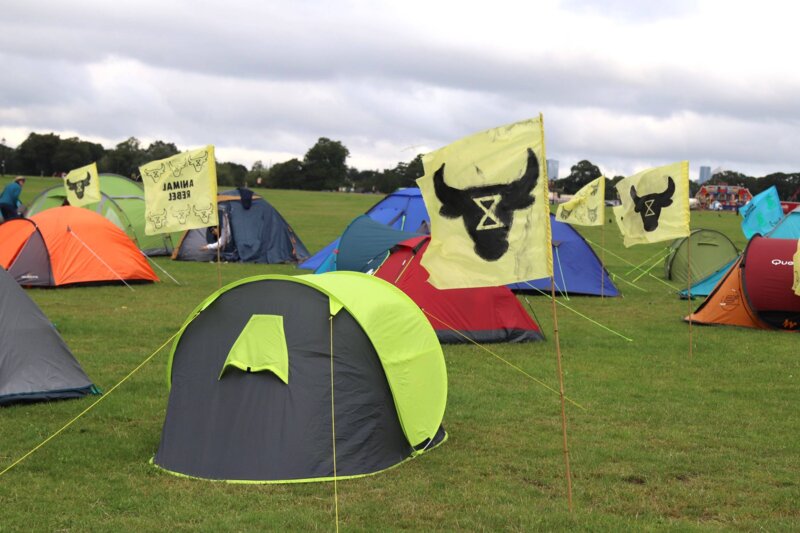 Things weren’t too intense on day 1

The police, however, have been a little more hot-and-cold. On one hand, they’ve shown concern about protecting the campers’ safety and wellbeing. That’s nice. On the other, they’ve surprised rebels somewhat unpleasantly by visiting the camp at 3 am with their searchlights on full-beam.

We’ll see how these dynamics progress over the week, but it feels good to have felt such a positive initial response from the local community.

The sun may have set on the first day of rebellion, but we still have a long road ahead of us. Please come down and support throughout this week and next. Details here.

To keep up with what’s going on, join the Rebellion Telegram group. It has everything you need to know.

‘The work of all my scientific colleagues around the world tells me that we’re in a lot of danger and that there’s a very limited window in which we can do anything about it. In some way, I’m here to support other scientists who’ve been warning the world about what’s happening. I hope that by being here, we can raise the alarm and help people understand the situation.

It’s really hard to be a scientist and to observe all the data about the world around us falling apart. It’s really terrifying.

I can’t just sit in the lab and do the science – I feel I have to get out there and make it count.’

Thank you for reading. There’s so much exciting stuff going on we barely have time to write this sign-off. Keep up the good work! If you have any questions or queries, please get in touch at enquiries@extinctionrebellion.uk.