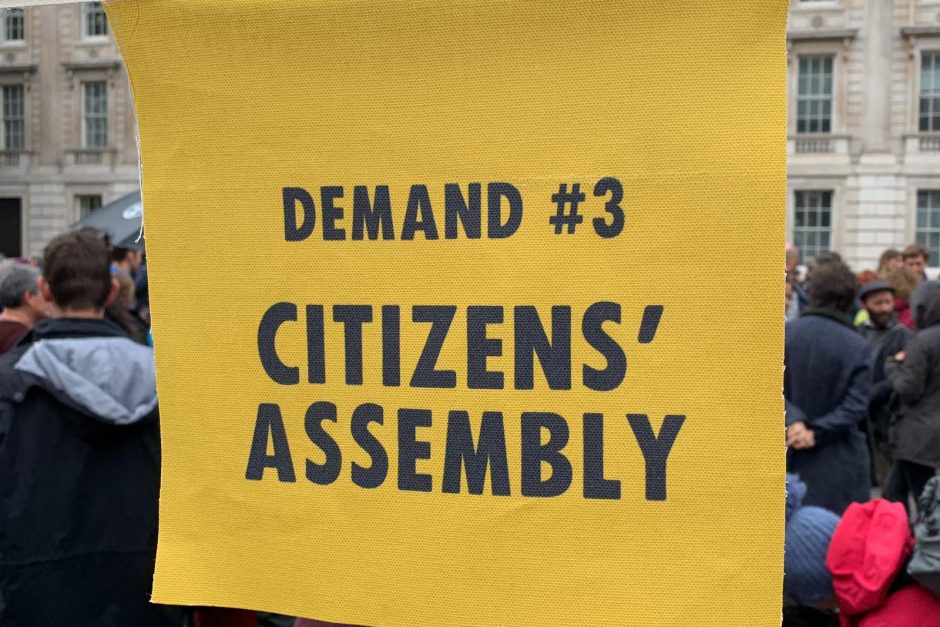 Day 1 of the 2021 ‘Impossible’ Rebellion is swiftly approaching, and the Citizens’ Assembly Working Group (CAWG), want to make sure all the rebels are up to speed with the Third Demand: A UK-wide, independently run Citizens’ Assembly on Climate and Ecological Justice.

Get yourself up to speed in time for the Rebellion, and if you haven’t attended our Third Demand talk about citizens’ assemblies or you need a bit of a refresher, make sure you register for our upcoming sessions now.

So just remind me… Why is Extinction Rebellion UK calling for a Citizens’ Assembly on Climate and Ecological Justice?

Parliament declared a Climate Emergency in May 2019, however we have seen no real action – just more promises and announced targets. The recent G7 conference was more of the same and there is little hope that COP26, under the UK co-presidency, this autumn will produce material action. Meanwhile, alarm bells intensify with weekly news of devastating heat, fire, and flood events. More and more people from the financial and economic sector are also warning that the “climate crisis will collapse our financial system.”

Response of the UK government and political parties is ‘business as usual’. There is continued focus on the next elections and retaining power instead of political parties working together and with the public at large. There is still no indications that our politicians will truthfully acknowledge the scientific reality and take action to alter the trajectory we are on. This emergency impacts us all and can only be addressed if supported by society as a whole, not just a segment of the population.

The past 30+ years have shown that our governmental system alone, with its dependence on special interest groups and its often separate, removed position from ordinary people, is incapable of addressing these complex issues. Our elected representatives are not equipped to deal with large scale, long term issues. Nor can they really know what options ordinary people would choose, if given the facts.

An emergency citizens’ assembly would help the government address these problems. It would bring people from a cross-section of society together to find a pathway forward, outside of party politics and ideological platforms. The Citizens’ Assembly on Climate and Ecological Justice – independently run from government and interest groups, including XR – would help ensure a fairer outcome based on a wide range of views and needs. It would inform our politicians what measures the public wants to take and what type of future it wants. This would provide the government with the cover, justification and legitimacy, to make the difficult choices needed. The Assembly would not replace government, nor parliament, but would be mandated by them to steer government action with the urgency needed in this emergency.

The changes we need to ensure we live within the planetary boundaries won’t be easy. That’s why ordinary people must have a say in how we make these changes. We stand before a choice – allow our government and politicians to quibble over the next election, while accelerating suffering and destruction from climate and ecological events; or demand that the voices and interests of ordinary people guide our government action.

Look out for our mini series of posts coming soon to explain the process of citizens’ assemblies and recent examples around the world.