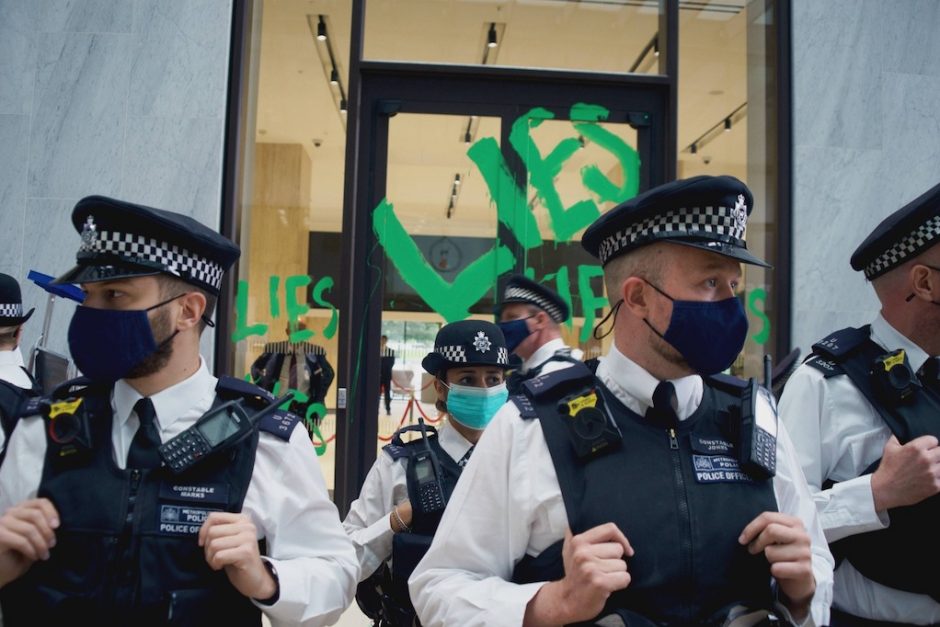 The prosecution of five Extinction Rebellion members who took part in an action at the Shell HQ in August 2020 has collapsed.

A jury trial was due to begin at Southwark Crown Court today for criminal damage and conspiracy to cause criminal damage. However, Judge Perrins this morning dismissed the case as the damage amounted to just £163 and the Crown Prosecution Service should not have referred it to crown court.

During the action, on 28th August 2020, four people were arrested for spray-chalking the words LIES onto the side of Shell’s London HQ. A fifth, artist Daniel Blackmore, was arrested and charged with conspiracy to cause criminal damage.

As conspiracy is an ‘either-way’ offence, Daniel was given the option to have his case heard in the crown court. With the five being prosecuted together under the law of joint enterprise, all their cases were referred up.

The other three who were due to stand trial today are Hannah Schafer, Tess Burn and Ian Stoneman. The fifth member of the group, Hugh Thomas, had previously pleaded guilty.

However, only cases where criminal damage exceeds £5,000 should be heard before a jury in the crown court, rather than in the lower magistrates court.

At this morning’s hearing, the CPS offered no evidence and the group were found not guilty. Hugh had the case against him discontinued. All the defendants were awarded their costs.

This would have been Extinction Rebellion’s third case to be heard before a jury. It follows the acquittal in April of six Extinction Rebellion activists in a landmark verdict at Southwark Crown Court, when the jury found the six not guilty despite the judge ruling that five of them had no defence under law. The jury in XR’s first jury trial, of the DLR 3, delivered their guilty verdicts ‘with regret’.