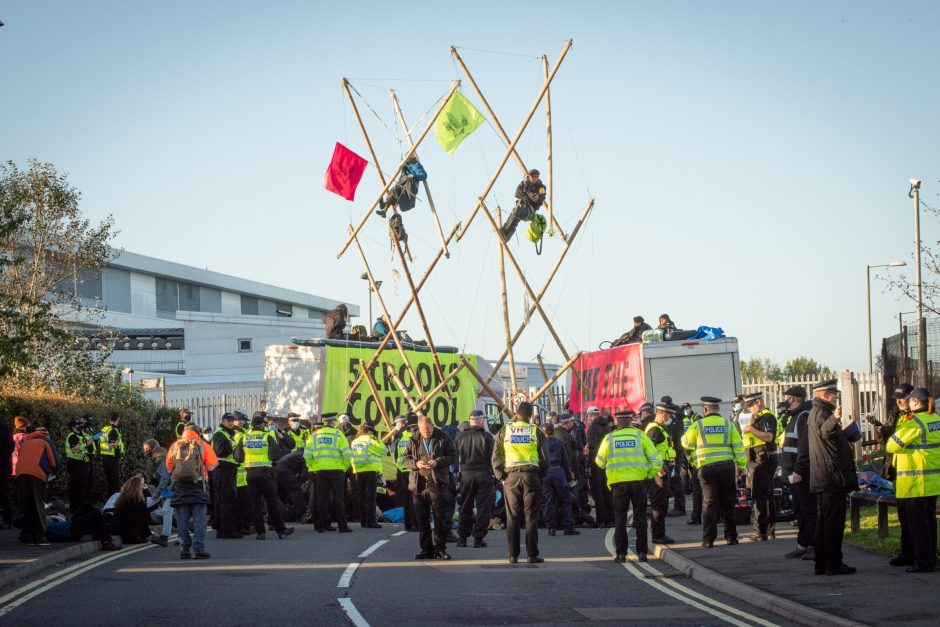 Monday 10th May 2021: The first in a series of trials for 50 Extinction Rebellion members who blockaded Rupert Murdoch’s Broxbourne printworks begins today.

Six people will appear at St Albans Magistrates’ Court charged with obstruction of the highway during a protest in September 2020 that disrupted the distribution of newspapers including the Sun, the Times, the Telegraph and the Daily Mail.

The six defendants, who are all charged with obstruction of the highway, are Tim Speers, Liam Norton, Sally Davidson, Eleanor (Gully) Bujak, Morgan Trowland and James Ozden.

Charges relate to the night of Friday 4th September, when the group of Extinction Rebellion members blocked the roads leading to the Broxbourne printworks near Waltham Cross with vehicles, reinforced metal lock-ons and two bamboo tensegrity towers. [1] Protesters displayed banners that read ‘Five Crooks Control our News’ and ‘Free the Truth’.

The blockade continued until 11am the following day, when those activists who the police had still failed to remove came down from the trucks and bamboo scaffolds and were arrested. The action succeeded in preventing copies of newspapers, including the Sun, the Times, the Telegraph and the Daily Mail, from reaching the newsstands.

Extinction Rebellion took the action to expose the failure of these publications to accurately report on the climate and ecological emergency, their divisive tactics, the consistent manipulation of the truth by their corporate owners to suit their own personal and political agendas, and the lack of public trust in our so-called “free press”. [2][3][4][5][6][7][8][9][10][11][12][13]

A simultaneous blockade took place at Murdoch’s Knowsley printworks outside Liverpool. Trials are already underway at Liverpool Magistrates Court for the 24 people who took part at Knowsley. Last week, one trial ended with the acquittal of three people charged with aggravated trespass and a second trial collapsed after the prosecution was unable to prove the protesters were on private land.

Former cabinet minister, Peter Hain has called for an end to all pending XR trials. Since April 2019, there have been an estimated 2000 prosecutions for Extinction Rebellion protests, with almost 1000 trials still underway. For stories of some of those arrestees visit our arrestee archive.

Extinction Rebellion activist and defendant Gully Bujack, 27, said: “Civil disobedience is a revolutionary tool with a rich history. It works, and it’s beyond necessary. I take no pleasure in being arrested, being put on trial, or being trashed by the billionaire press, but I am not ashamed. Because I know that nothing will ever change unless ordinary people are prepared to make sacrifices, and I know that our sacrifice here and now pales in comparison to that of activists in the global south, or that of the generations that will come after me.”

For more information and photographs of defendants or to arrange interviews please contact Zoe on 07918165046.

For photographs of the action visit https://show.pics.io/xr-global-media-breaking-news-content/search?tagId=5f532e124a85742e236b6586

Press failure to report the scale and urgency of the Emergency

[2] We are in an emergency of unprecedented scale and the papers we targeted are not reflecting the scale and urgency of what is happening to our planet, even as we in the UK are experiencing the impacts of our warming world. For example, in the weeks leading up to our action, while the NFU warned that due to the extreme weather, a result of climate change, the wheat harvest would be down by 30%, the Sun failed to report it. As EDF admitted that construction of the new Sizewell nuclear power plant would emit 5.7 million tonnes of C02, the Sun took a pop at vegans. And as Storm Francis caused widespread damage, the Sun failed to make the link to climate change.

[3] While much of the right wing press has moved away from outright climate denial, it continues to ridicule environmentalists and those sounding the alarm, while sowing doubt about the severity of the situation and opposing measures that would mitigate climate change.

[4] The Sun, along with the rest of the right wing press, continues to lobby for the expansion of the aviation industry and other polluting activities. Outside the UK, Murdoch’s flagship paper, The Australian, has been widely condemned for running upbeat stories about picnics while bushfires, caused by global heating, ravaged the country.

[5] Four billionaires (Rupert Murdoch, Frederick Barclay, Lord Rothermere and Alexander Lebedev) are the majority voting shareholders for most of the UK national newspapers, with a combined weekly readership of 49million. Three companies alone (News UK, DMG and Reach) dominate 83% of the national newspaper market (up from 71% in 2015).

[6]This small group of extremely powerful people manipulate the media narrative to serve their own ends. As author, George Monbiot has said: “All billionaires want the same thing – a world that works for them. So how, in nominal democracies, do they get it? They fund political parties and lobby groups, set up astroturf (fake grassroots) campaigns and finance social media ads. But above all, they buy newspapers and television stations.

“The widespread hope and expectation, a few years ago, was that news controlled by billionaires would be replaced by news controlled by the people: social media would break their grip. But social media is instead dominated by stories the billionaire press generates. As their crucial role in promoting Nigel Farage, Brexit and Boris Johnson suggests, the newspapers are as powerful as ever. They use this power not only to promote the billionaires’ favoured people and ideas, but also to shut down change before it happens.”

[7] Rupert Murdoch, who is known to intervene personally in the editorial output of his titles, is a famous climate denier, who sits on the board of an oil and gas company. He has been criticised by his own son for his businesses “ongoing denial” of the climate crisis.

Do we really have a “free press”?

[9] On 6th September, the UK government was formally warned by the Council of Europe for threatening press freedom after it blacklisted a group of investigative journalists and denied them access to information.

[11] According to a YouGov Poll made up of more 1600 people and commissioned by Extinction Rebellion:

The unchecked power of the corporate press

[12] BBC documentary The Rise of the Murdoch Dynasty charts Rupert Murdoch’s influence on our politics. With a media empire that spans three continents, he has used his vast political power to undermine our democratic system: his media outlets have backed every winning prime ministerial candidate since Margaret Thatcher came to power in 1979.

[13] Following our action, the hostile press has made personal attacks on our furniture, fabricated stories about divisions within the movement, attempted to paint Extinction Rebellion as ISIS supporters and fascists, tried to get our funders to disown us and other activists to denounce us, dropped scheduled stories about us, and even made a bizarre attempt to blame us for a 95 year-old granny falling over in search of her absent morning paper. We will be publishing our attempts to seek corrections or retractions where publications have breached the IPSO code.

A suggestion for editors

[14] If you want to start digging into the truth about the Emergency, rather than the provenance of our bookshelves, you could begin by asking what living in a 4 degree world would look like. You could also scrutinise the government’s efforts to meet the recommendations of its own Climate Change Committee. And you could sign up to Covering Climate Now, which provides resources for journalists reporting on the Emergency. Extinction Rebellion has access to brilliant scientists if you need a comment. For a thorough briefing on the science, please see the newly published Emergency On Planet Earth, written by Dr Emily Grossman with the support of the XR Scientists community and fact-checked and reviewed by a wide range of experts.

[15] If you have insider information about any aspect of the climate and ecological crisis, including evidence of how those with vested interests are downplaying the scale of the emergency, visit Extinction Rebellion-supported whistleblowing website www.TruthTeller.Life. However large or small the revelation, TruthTeller.Life can help you tell the world what you know.