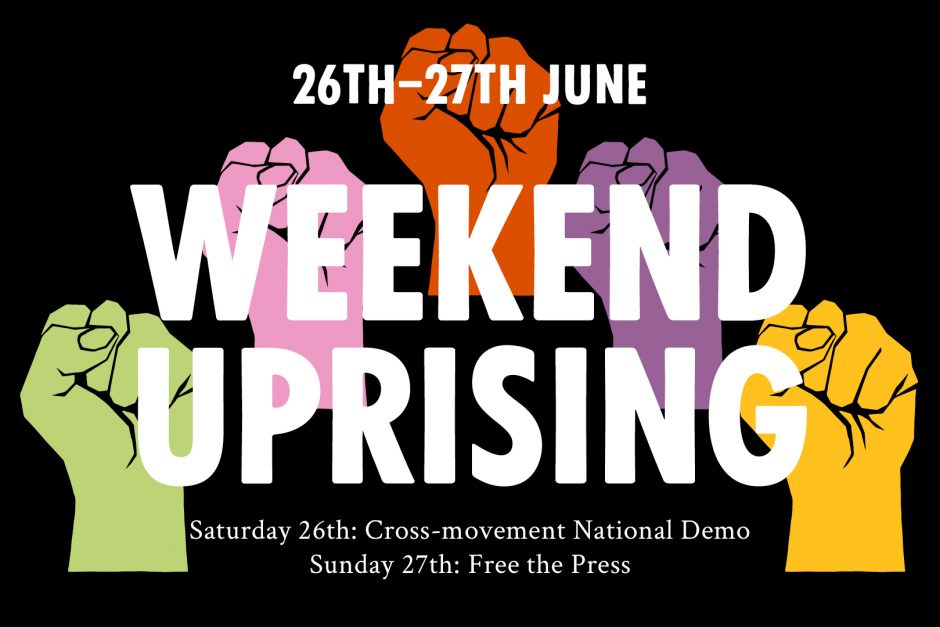 26-27 JUNE: THIS IS AN UPRISING – Extinction Rebellion launches plans for post-lockdown ‘Uprising’ in London

Visit our Free the Press campaigns page for more information!

Extinction Rebellion UK has launched plans this week for post-lockdown protest on the weekend of 26/27 June. The early summer ‘uprising’ which is scheduled for the first weekend after lockdown restrictions officially end in the UK, aims to capture rising momentum across the country after a difficult year of separation, Westminster and industry cronyism, civil unrest and clampdowns on dissent from a government drunk on power.

The weekend will consist of two separate days of action when we will stand in solidarity with our allies around shared values. Extinction Rebellion will join a cross movement national demonstration in London on Saturday 26th June – hosted by People’s Assembly Against Austerity and set to be attended by NGOs, unions, grass roots movements and more – when groups will stand together to turn their back on a return to business as usual after Covid-19 and demand a new normal.[1] When lockdown lifts, there will be an opportunity for social movements to move beyond divisions based on a focus on different symptoms, to uniting around those symptoms’ shared cause.

After marching with allies on the Saturday, Extinction Rebellion will be dialling things up on Sunday 27 June, inviting everyone to come back together to hold the mainstream media to account for profiting from our division and consistently failing to tell the truth about the climate and ecological emergency.[2] Democracy in the UK is in crisis, with a corrupt media fuelled by the division of the general public playing a significant role in its decline. A revolving door between our government and a billionaire press that is obsessed with profit and accentuating hostility is undermining our democracy. Following on from the success of the September printworks action, where Extinction Rebellion blocked News Corp printworks in Broxbourne and Knowsley for a whole night, we call on everyone to join us in demanding a press that is fit for purpose, a democracy that serves the people, and a country that is united against hate and division.[3]

Steve Tooze, 57, former tabloid journalist, father of three, from Herne Hill, London: “The idea that we have a ‘free press’ in the UK is a dangerous façade – I know that from 20 years on the inside as a journalist at newspapers like The Sun and the Daily Mail. Our print media is a toxic propaganda unit for denying, or playing down the climate crisis, to protect the business interests of their amoral billionaire owners.

“Millions of people have been lulled by their lies into a false sense of security about the terrible and accelerating environmental threat we all face. I feel it’s my moral duty to keep confronting and disrupting this lie machine until it starts to tell the truth.”

The plans come amid growing unrest around the Police, Crimes, Sentencing and Courts Bill which has seen movements, organisations, unions and individuals standing together to defy a government and police force hell bent on pushing the UK further towards authoritarianism. With alliances forming and general dissatisfaction with the government’s handling of the pandemic, systemic racism, the climate crisis and covid contracts, it is looking like a summer of protest will be on the cards across the UK.

Gully Bujak of Extinction Rebellion UK said: “From growing inequality and racism, the privatisation of the NHS, our increasing fear and hatred of the ‘other’ and endlessly shameless corruption, I’ve never felt more conflicted about what it means to live in this country. Once-British values of honesty, tolerance, courage and fairness have been captured by those at the top – in government and in the media – who want only to enrich their own power and wealth at our expense, by keeping us fighting amongst ourselves.

“Our government is too busy giving lucrative contracts to their mates to face up to the climate emergency, the billionaire press making a living off scapegoating and truth twisting, and the revolving door between the two makes a mockery of our so-called democracy.

“Right now, the future looks bleak. But coming out of covid we have a window of opportunity, and we need everyone who dreams of better – for ourselves, for our neighbours, for our children and our grandchildren – to pull together and demand change. It’s time.”

More information to be released soon.