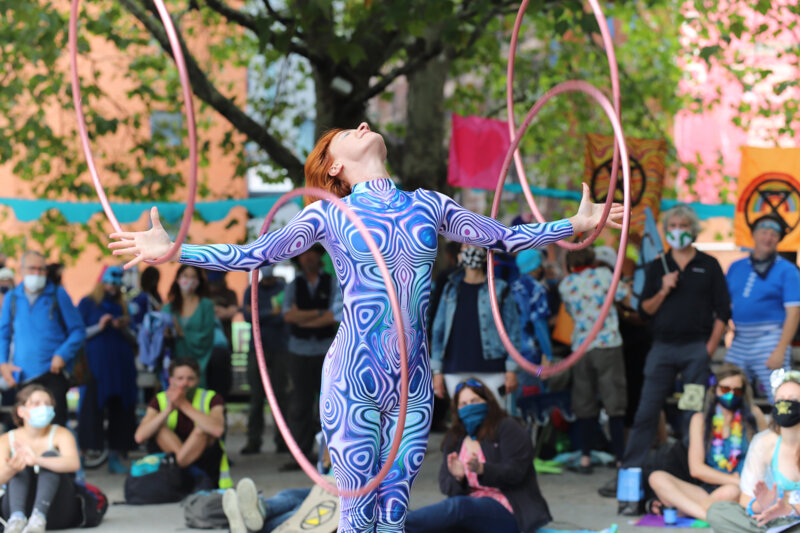 Rebel Daily 5: We will not be intimidated

Welcome to Rebel Daily #5 – and what an eventful weekend it was! Ugly words from our prime minister provided a sharp contrast with our beautiful earth-defending actions.

Ever since we crossed the Murdoch media (for a single night!), the government has taken its repression to another level. 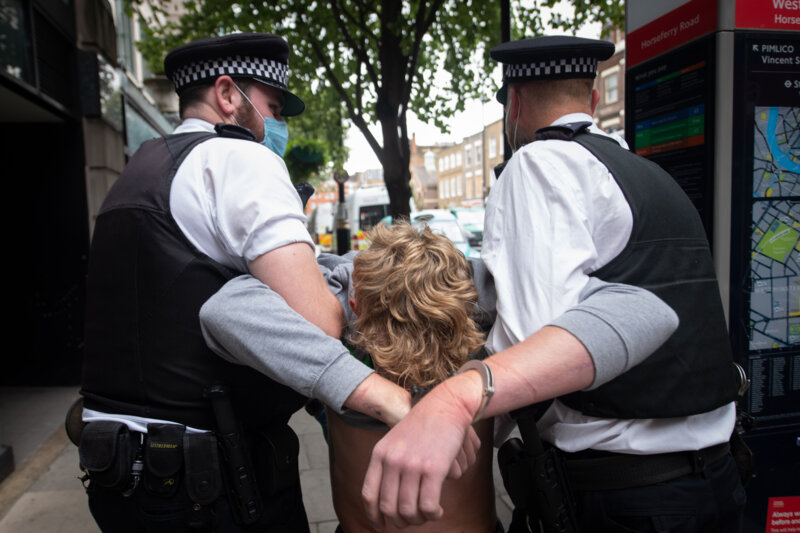 The intensity of policing and restrictions to civil liberties have left rebels feeling like they’re living in a dystopian novel. Food and water has been denied to HS2 rebels in trees for a second day running, in a truly shocking human rights abuse. Anyone trying to help the tree-protectors is getting arrested.

Police disbanded a socially-distanced democratic assembly in Trafalgar Square, threatening Covid fines at our masked faces until we left. ‘Assemblies’ of rebels are being hassled and it seems police now need only the flimsiest legal reason to move you on, in a Coronatime repeat of last October.

We can only speculate about where this order has come from, but it’s probably not from the officers on the street. 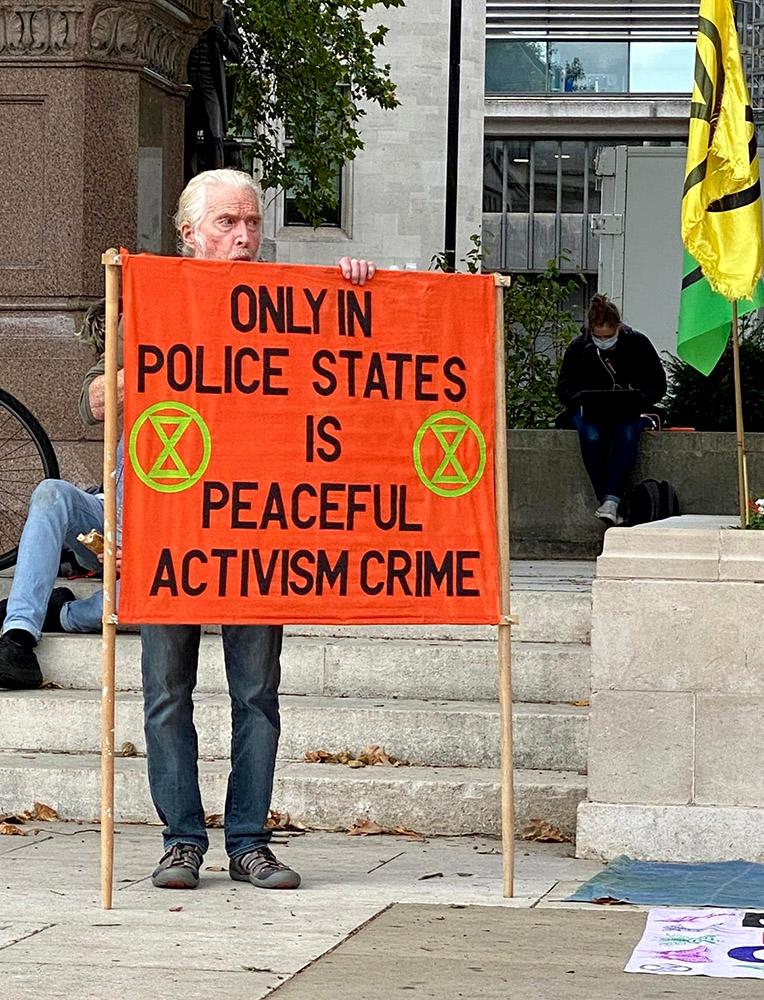 Indeed, with meetings in progress about whether XR should be legally reclassified as an ‘organised crime group’, we might imagine that orders come from the very top. The government itself outlines ‘organised crime’ as characterised by ‘violence or the threat of violence and by the use of bribery and corruption’. While there are plenty of legitimate reasons to criticise XR, this one really doesn’t seem to fit.

As the powerful try to paint us in more aggressive shades, our commitment to nonviolence becomes more important than ever. If we remain calm and composed, their overblown reactions look all the more excessive. See this message from the Embedding Nonviolence team. 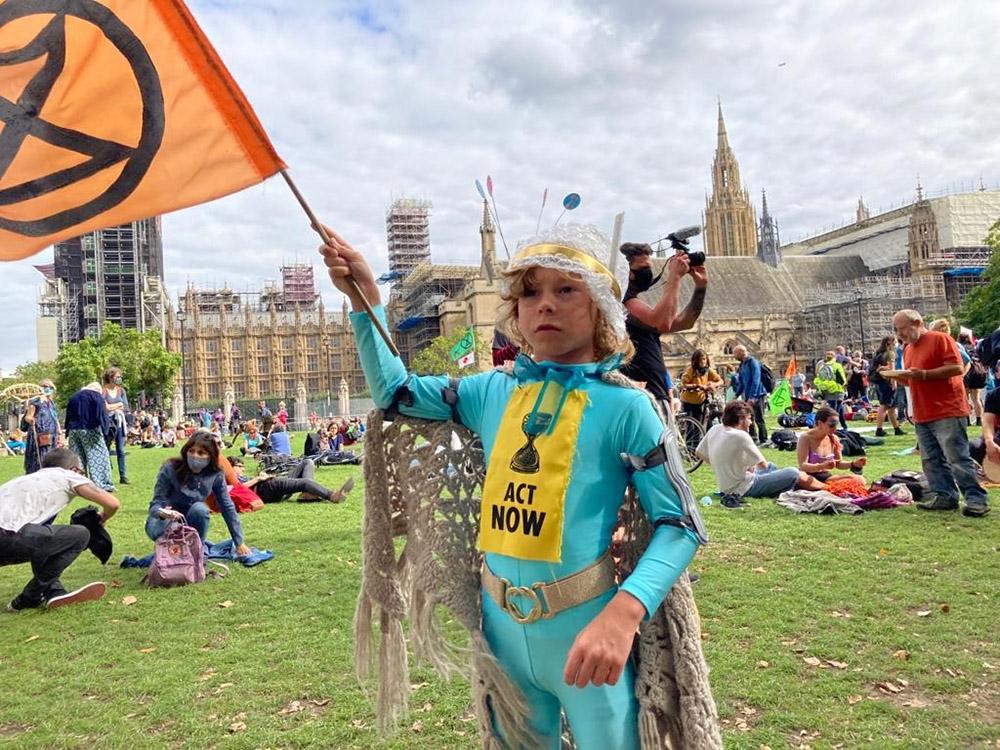 Don’t be fooled – this is one of our most dangerous operatives.

Stay safe, rebels, and be clear about your rights as a peaceful protestor – refresh your memory with this 2-minute video by Netpol.

We repeat: we will not be intimidated. Peaceful protest and the freedom to speak truth to power are hallmarks of a healthy democracy.

Our political elite can throw all the tantrums they want: the environmental crisis we face is not going away and neither are we. 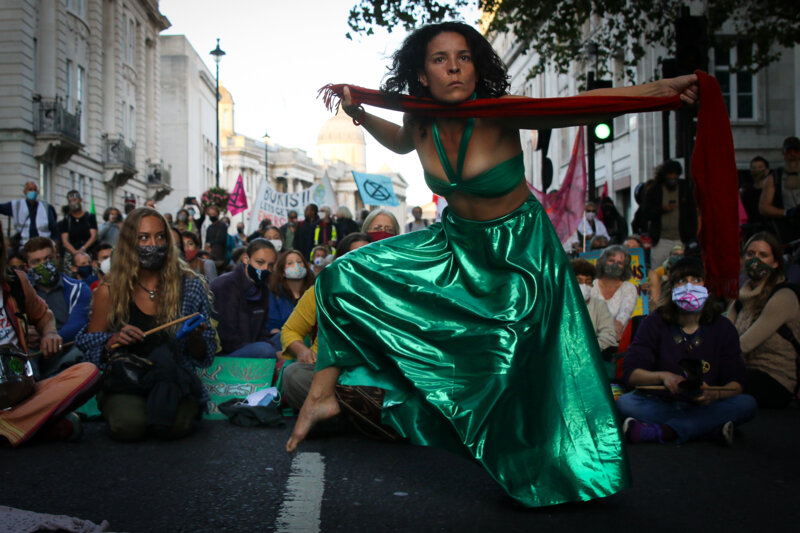 A tidal wave of Rebellion 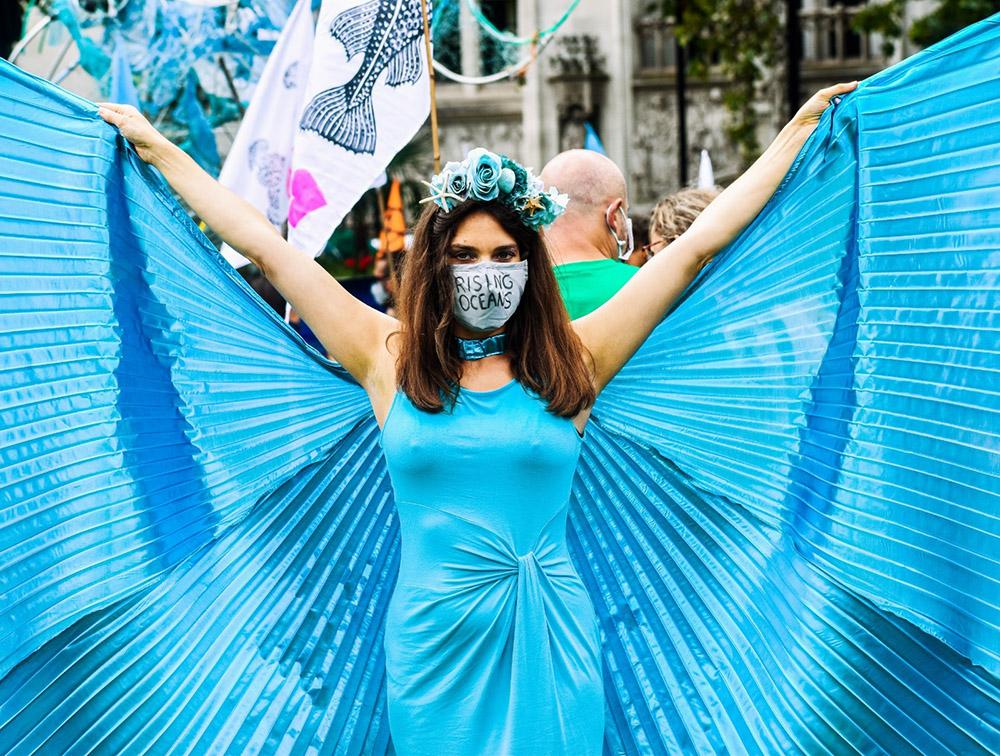 Rebels rose up from the Thames outside Tate Britain as a warning of the rising sea levels coming to flood our capital (and most of the coastal world, for that matter) and to decry the destruction of our oceans.

Ocean Rebellion marched to call out the pollution of our oceans, with single cruise ships that release more greenhouse gasses than 10 jumbo jets bringing toxic fumes to the cities they visit. (And check out Ocean Rebellion’s launching event where they took on The World, while this link is still available).

The marine march moved on to Parliament, led by a wave of blue rebels and one sporting just speedos and a yellow hat. 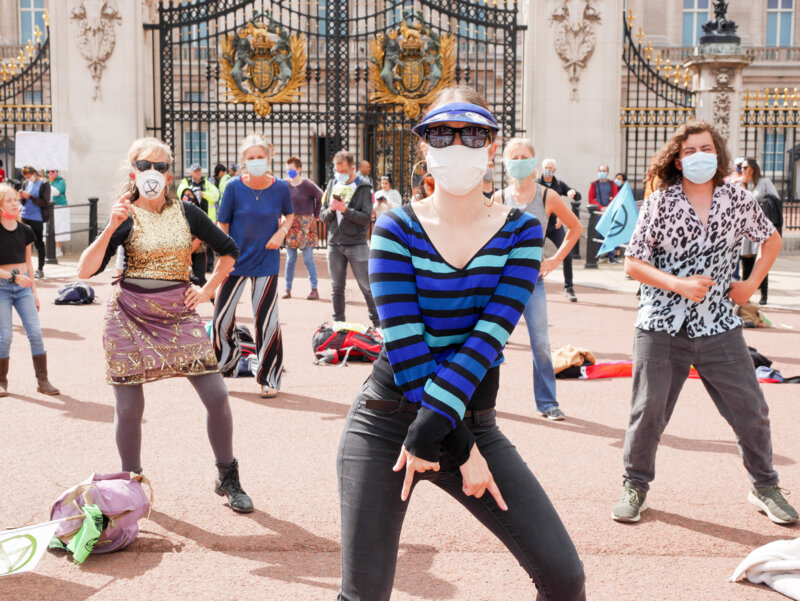 Even masks can’t cover up the swagger of these disco-bedient rebels. Photo: Joe T

On Saturday, a dangerous mob of boogiers met in front of Buckingham Palace to entice the Royal family into action with their wild moves. Rebels of all ages rocked at the royal gates, asking the Queen to be a dancing Queen and tune her government into responding to the emergency. 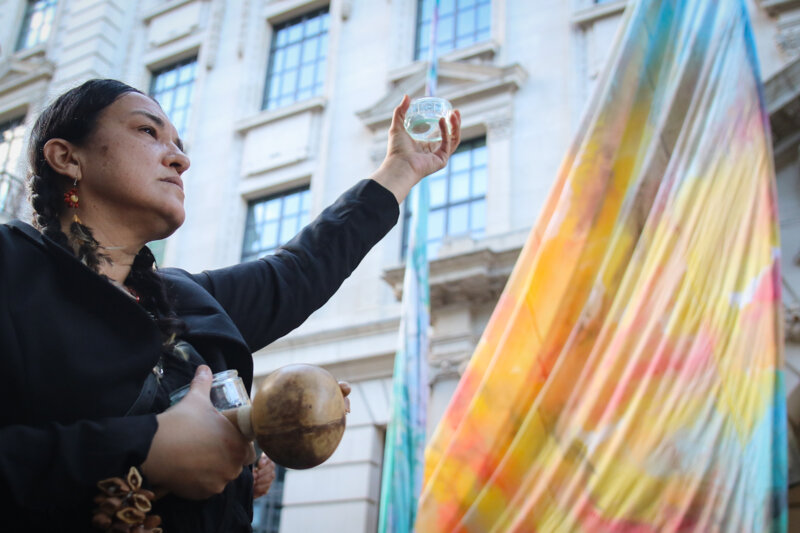 Together, we stand for the Amazon. Photo: John Owens

And XR Amazonia Alliance and Animal Rebellion marked International Indigenous Women’s Day gathering at Trafalgar Square and ending up at the Brazilian Embassy. They honoured the brave women protecting the Amazon and made an urgent plea to end the destruction of our planet’s lungs.

UK Gov or XR: Who’s the bigger danger to democracy?

The bamboo towers swayed in the dark of night, the empty delivery trucks switched off their engines and settled in – no papers coming out tonight. 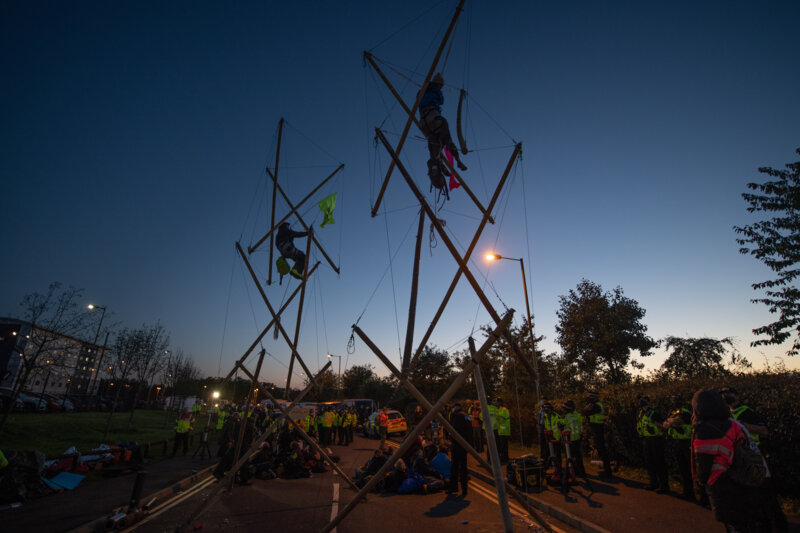 As the sun rose on our newspaper blockade, the bamboo towers held as strong as the rebels’ resolve.

According to Boris and Priti, XR committed the anti-democratic act of preventing the British public’s access to the free press. But in a pantomime of irony, the Council of Europe just issued a formal warning (a ‘Level 2 media freedom alert’, no less) to the UK government for blacklisting investigative journalists that it didn’t like.

This came just hours before Boris saddled up his high horse to very seriously lecture us on our ‘completely unacceptable’ attack on democracy.

He’s not calling us ‘uncooperative crusties’, anymore, is he? 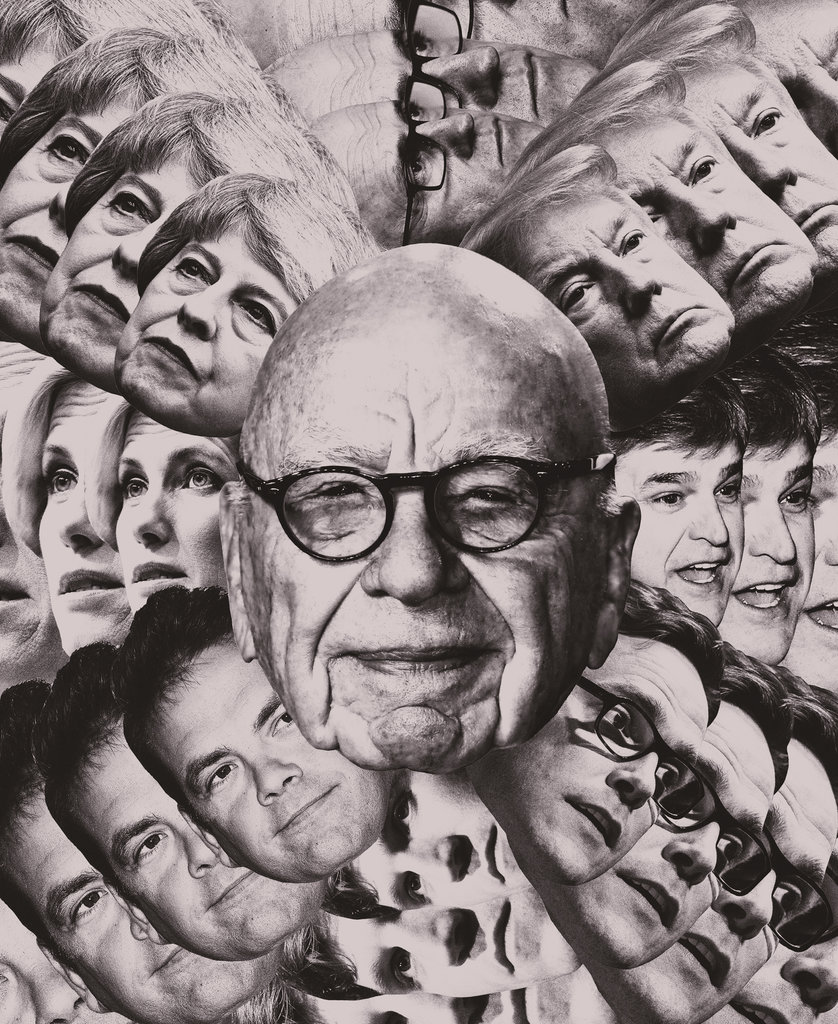 Credit: the New York Times, purveyors of news and nightmares.

Here are some things that we consider unacceptable: six billionaires control Britain’s ‘free‘ press; Murdoch’s empire contributes, in the words of one of its own senior execs, to ‘the spread of climate change denial and lies’, with the M-bomb himself entwined with fossil fuel interests; Murdoch’s people have met with the government 206 times in the last two years.

Oh, and that every single PM in office since Thatcher has been Murdoch-backed.

Questioning the oligarchic choke-hold on our press is not an attack but a defense of our democracy.

If you’re looking for truly independent journalism, try openDemocracy, Democracy Now, New Internationalist, or one of the many others celebrated here.

That’s the basis for our third demand: establishing a Citizens’ Assembly on climate change. And on Saturday, rebels and members of the public were invited to an assembly to deep-dive into the connections between the democratic crisis and the climate and ecological emergency. 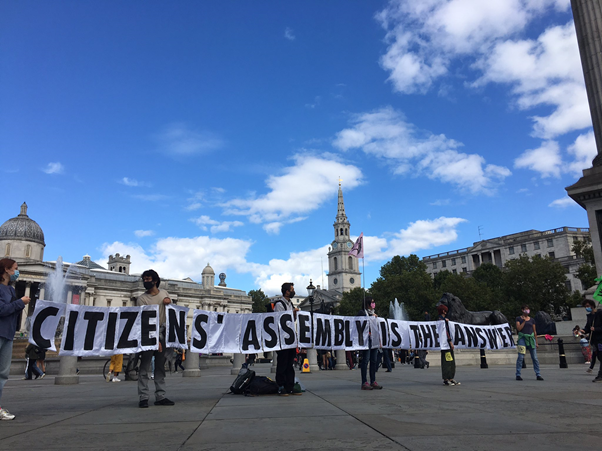 Socially distanced and clad in masks, rebels assembled in Trafalgar Square for an afternoon of speeches from scientists, activists and democracy experts. This began with a full briefing on coronavirus safety procedures and was due to be followed by a giant conversation in small groups about building a better democracy.

But, while rebels sat on the ground listening to speeches, the police moved in to disrupt the peaceful protest, threatening those who didn’t disperse with fines for posing a public health risk. 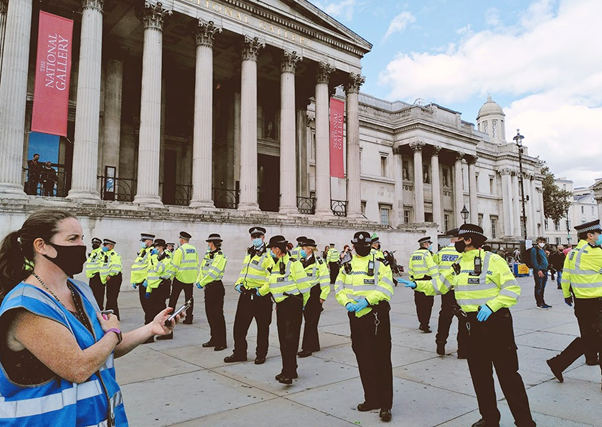 Those who refused to leave the assembly were carried or led away by police, and several people were arrested.

Rebels at the scene reported that, once the socially-distanced assembly was dispersed, Trafalgar Square filled once again with a throng of tourists – making police excuses about protecting public safety even less defensible.

A true movement of movements

An amazing week of actions in Cardiff was brought to a fitting climax by the Justice Now March. Around a thousand people from over 20 movements marched six miles through the city in solidarity with all those who face injustice. 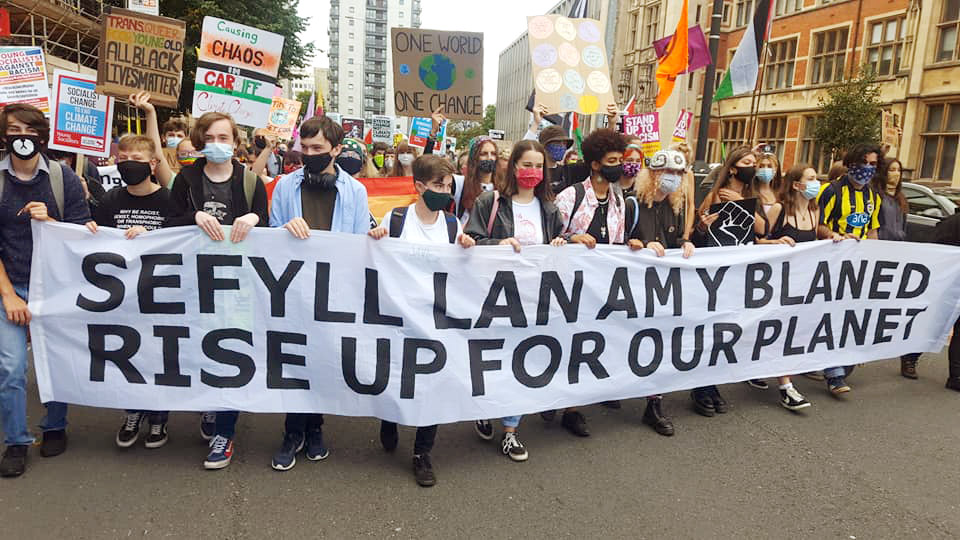 Outside the Home Office, the march was met by Red Rebels and a minute’s silence was held in memory of the many migrants who have lost their lives. Following a rousing speech, the march continued to its final destination: the Senedd.

Rebels with energy still to give will be joining the London Rebellion and HS2 protests.

BBC, we know you can do better 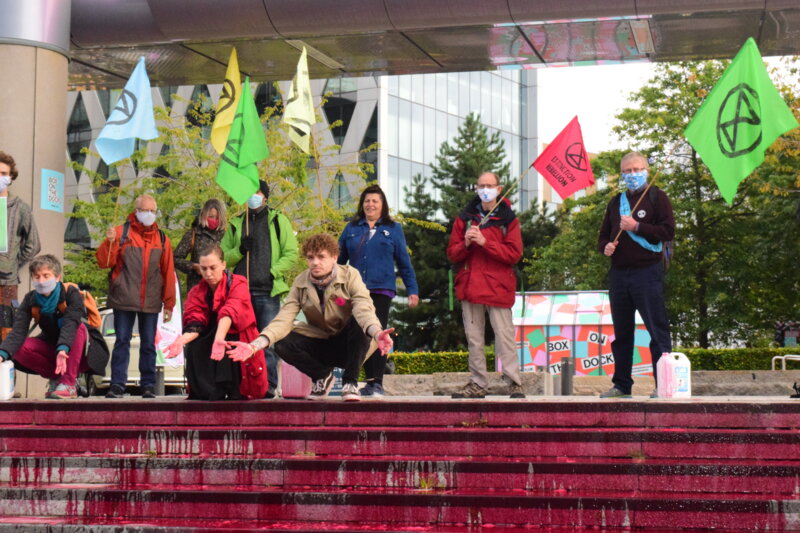 Northern rebels wrapped up a glorious week of rebellion with a well-timed action outside the city’s BBC office. With the media’s role under fresh scrutiny, rebels came to give the Beeb some creative encouragement.

With life rafts, origami boats, and a river of blood, the rebels called attention to the under-reporting and misrepresentation of migrants – and underlined that all our fates are tied to the same fragile ecosystem. 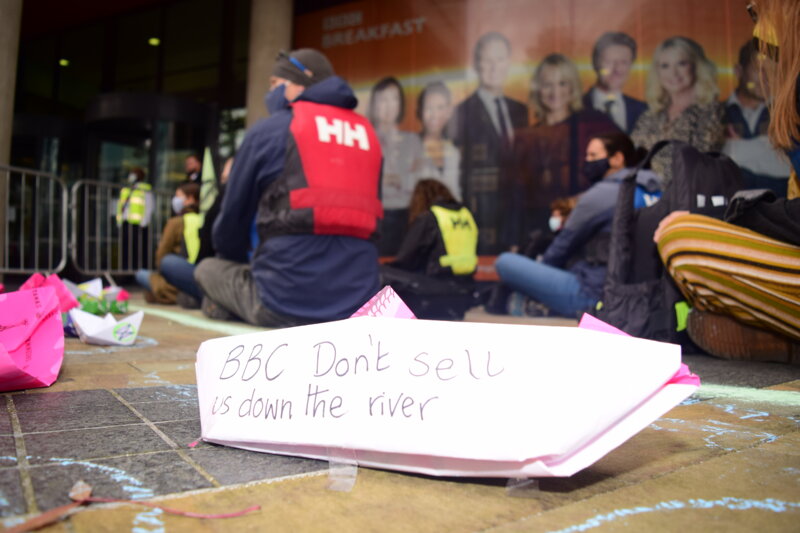 The striking visuals spoke for themselves, but were also spoken for in stirring speeches. As one rebel put it, “There are still far too many people in this country who don’t yet really get it, and it’s not the public’s fault.

“Imagine if the BBC did their public service duty and did wall-to-wall coverage of the climate and ecological crisis, its causes and the potential solutions, like it has done with coronavirus.”

With enough actions like this, perhaps one day we won’t have to imagine?

Here are some more shots from a very busy weekend! 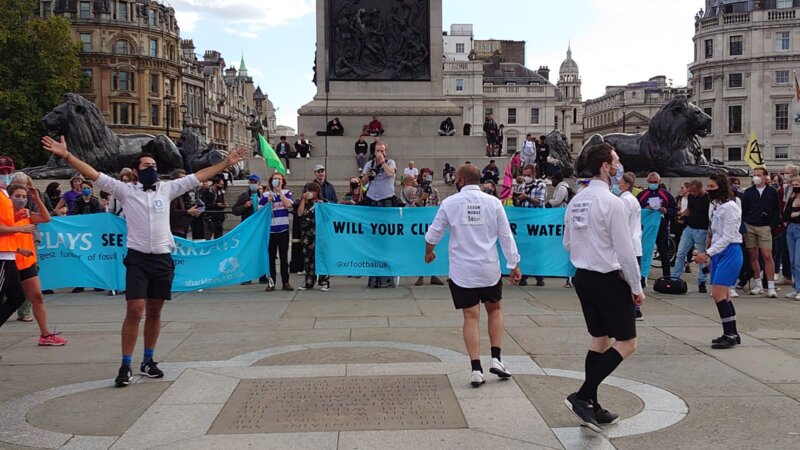 Football match rigged in favour of Big Oil, banks, politicians and media moguls took place at Trafalgar Square. ‘Barclays Sharklays’ bribed the referee, had a smaller goal and generally cheated their way to the top! Not so much ‘The Beautiful Game’. 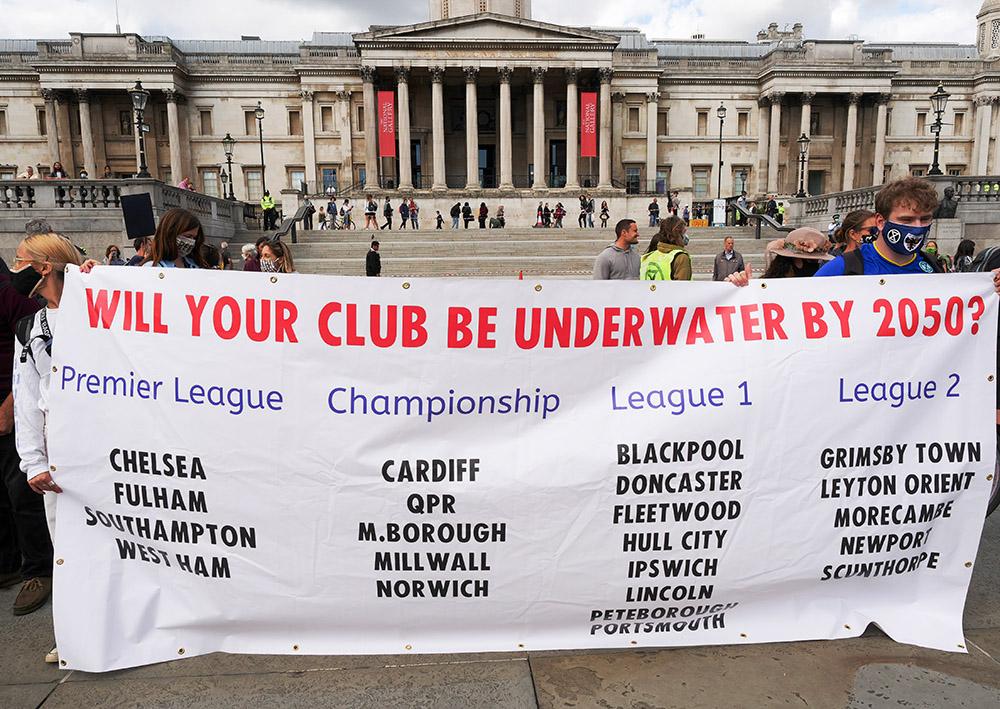 Many leagues under the sea! Going down a division will feel like nothing compared to your club going down underwater. Photo: Joe T 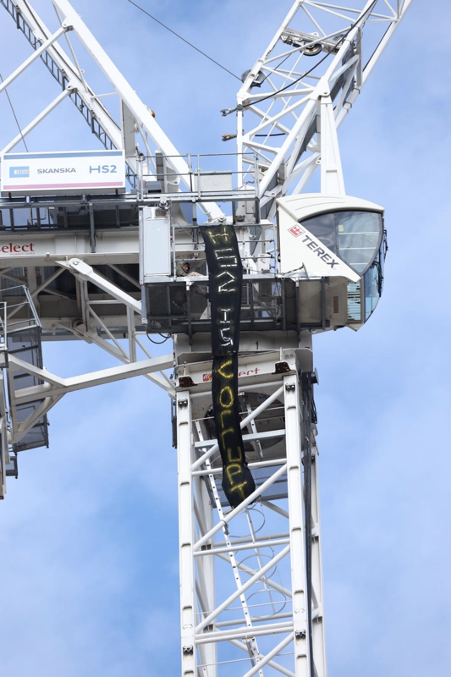 A daring rebel free-climbs a 150ft crane and is going on hunger strike until HS2 is cancelled. 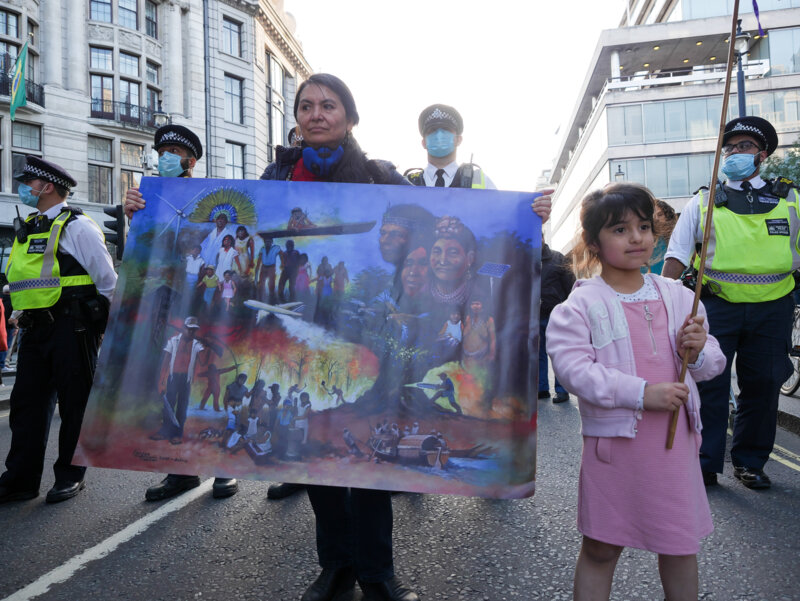 Rebels march in a heartfelt plea to protect the Amazon. Photo: Joe T.

Over the weekend, rebels exposed the billionaire press and their cover-ups of the truth. Now it’s time to bring the message to the heart of power – we’ll be taking on the government’s internal phone lines and email inboxes, demanding they free the truth about the climate emergency.

Phone numbers, email addresses and scripts all ready for you here. Join the digital community with the 1000-strong open Telegram group and daily zoom calls at 12 noon.

London & Digital. Join the Broadcast for another day of Action 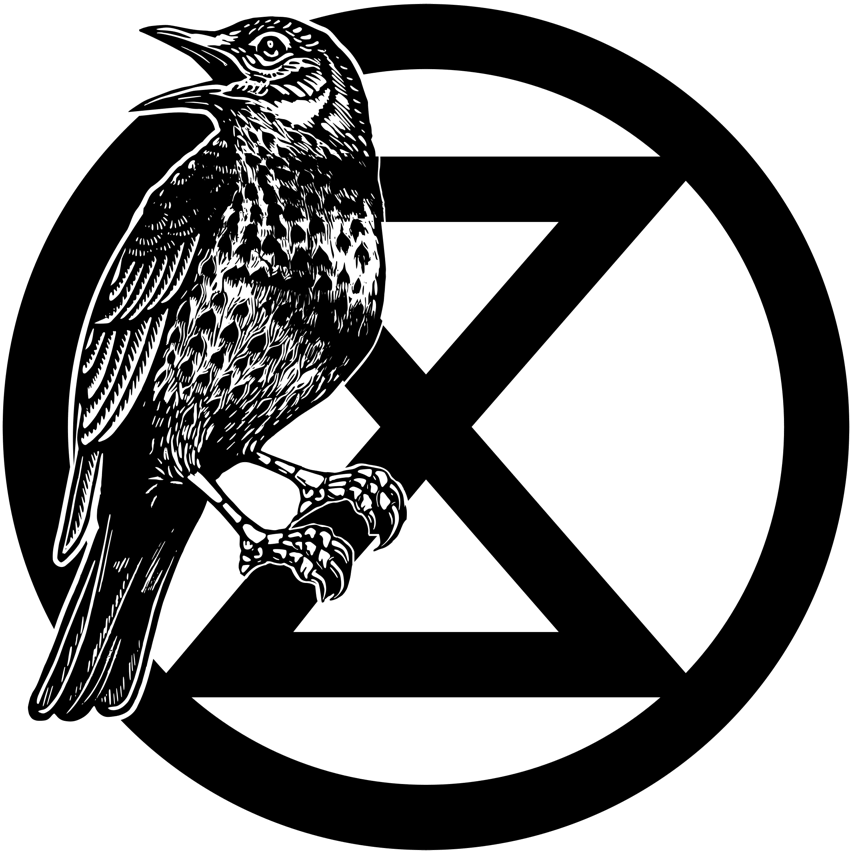 With groups from Manchester and Cardiff coming down to London to bolster the second week of Rebellion, check the schedule and join the UK-wide and London broadcasts to stay on top of the action.

Staying at home? Join the Digital Rebellion and the 1000-strong open Telegram group.

“I’m a drummer from Camden Samba. At actions, we follow a mix of tunes, breaks, and conducting methods first created by Rhythms of Resistance, a samba-inspired protest music movement that began in London in 2000. We take our cues from the crowd, the speakers, the stewards, and of course, the rest of the band.

Our group is decentralised and democratic, we all decide together how we want to build our bands and which actions we join.

I’m doing a Masters in social anthropology and studying how people use informal folk culture to resist oppression. Samba is a huge and complex genre of music, dance, and performance. But its roots are in the music of enslaved Black people and marginalised Brazilian communities.

People have always used culture to fight injustice. The most powerful way to change the world is to change the stories we tell about it. I’m in XR because, although we’re by no means perfect, we challenge the narratives of capitalism and colonialism that governments and corporations want us to believe.” 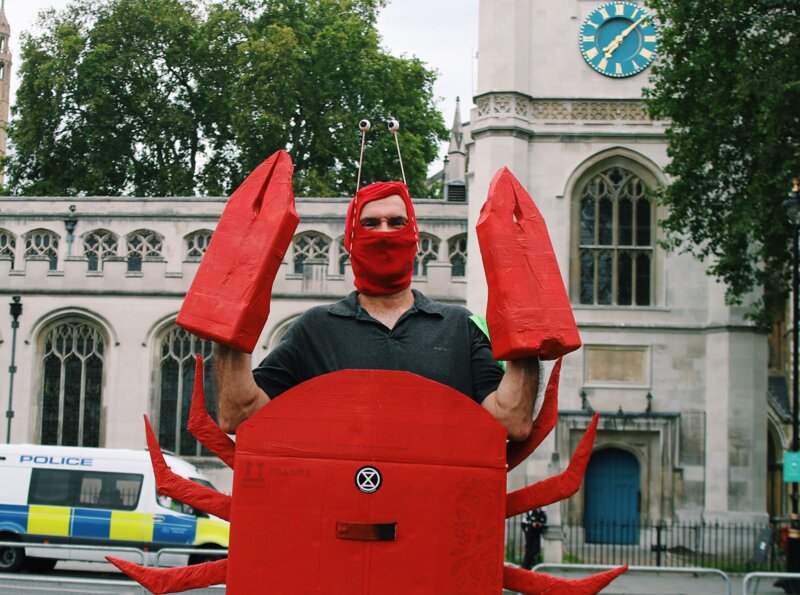