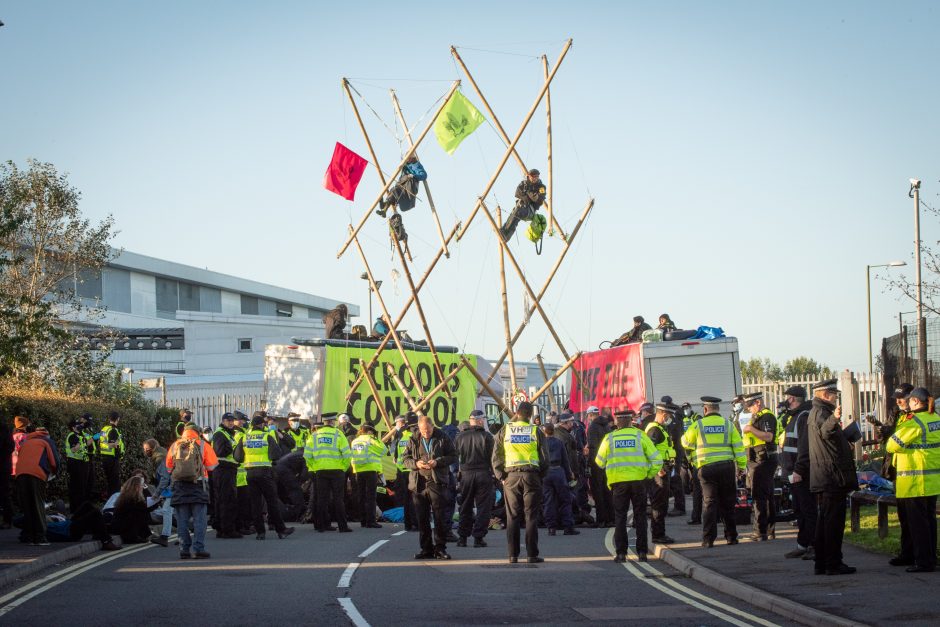 UPDATE: We do not have a free press

At 11am, the time they planned to end their blockade, the small group of protesters left blocking Broxbourne Printworks this morning have come down from the trucks and bamboo scaffolds and have been arrested. 48 people in total have been arrested at Broxbourne and many newspapers have been stalled from getting to their destination. Knowsley in Liverpool has been cleared with 21 arrests and the last few people taken away by police. The Glasgow blockade was cleared around midnight with no arrests.

Priti Patel and her government are part of a political system that does not want and does not benefit from a free press. Instead our leaders have allowed the majority of our media to be amassed in the hands of five people with powerful vested interests and deep connections to fossil fuel industries. [1] Powerful vested interest has led to the appointment of Tony Abbott – a friend of Rupert Murdochs, a climate change denier, misogynist and homophobe – as a UK Trade Envoy. Our leaders are allowing these powerful few to deny the young the information they need to plan for their futures and defend themselves.

We need a free press but we do not have it. They have failed us.

Last night’s action has brought us one day with far less misinformation, division and hate. For one night ordinary people – terrified by the climate and ecological emergency that so much of our media is failing to report sufficiently – made these powerful and undemocratic corporations feel the vulnerability ordinary people live with everyday.[2]

But this is not the story. We are in an emergency of unprecedented scale and the papers we have targeted are not reflecting the scale and urgency of what is happening to our planet. Even as we in the UK are experiencing the impacts of our warming world, the Murdoch press remains silent.[3] We – and the free press – have so much more work to do.

A free press does not push the agenda of its billionaire owners. Freedom of the press to these corporations means a completely unregulated fanfare with no threat of accountability for the harm and division they cause.

We took action at these printworks to encourage people to stand up and stand together during these turbulent times. The people who divide us profit from our fighting. But we can align across differences. Together we are powerful.

To any small businesses disrupted by the action this morning we say: We’re sorry. We hope that our actions seem commensurate with the severity of the crisis we face and that this day of disruption successfully raises the alarm about the greater disruption that is coming. There are five very wealthy people who own these newspapers and we encourage them to compensate you.

To Rupert Murdoch we say: we are not sorry for disrupting your business. Stop suppressing the truth about the climate crisis and profiting from the division your papers create.

To those in the media finding it hard to understand why we’ve taken this action, we say: You have a vital role to play in telling the most urgent story of our time with the courage and conviction it requires. We have run out of time for division and delay and you have the ability to bring people together with your words. If you are one of the hardworking, committed people out there trying to tell this story and would like to speak to us about how we can help, please get in touch.

To anyone who has insider information about any aspect of the climate and ecological crisis, including evidence of how those with vested interests are downplaying the scale of the emergency: Visit XR supported whistleblowing website www.TruthTeller.life. However large or small the revelation, TruthTeller.Life can help you tell the world what you know.

[1] BBC documentary The Rise of the Murdoch Dynasty. https://www.bbc.co.uk/iplayer/episodes/m000kxw1/the-rise-of-the-murdoch-dynasty

[3] For example, while the NFU warned that due to the extreme weather, a result of climate change, the wheat harvest would be down by 30%, the Sun was silent. As EDF admitted that construction of the new Sizewell nuclear power plant would emit 5.7 million tonnes of C02, the Sun took a pop at vegans. And as Storm Francis caused widespread damage, the Sun failed to make the link climate change.