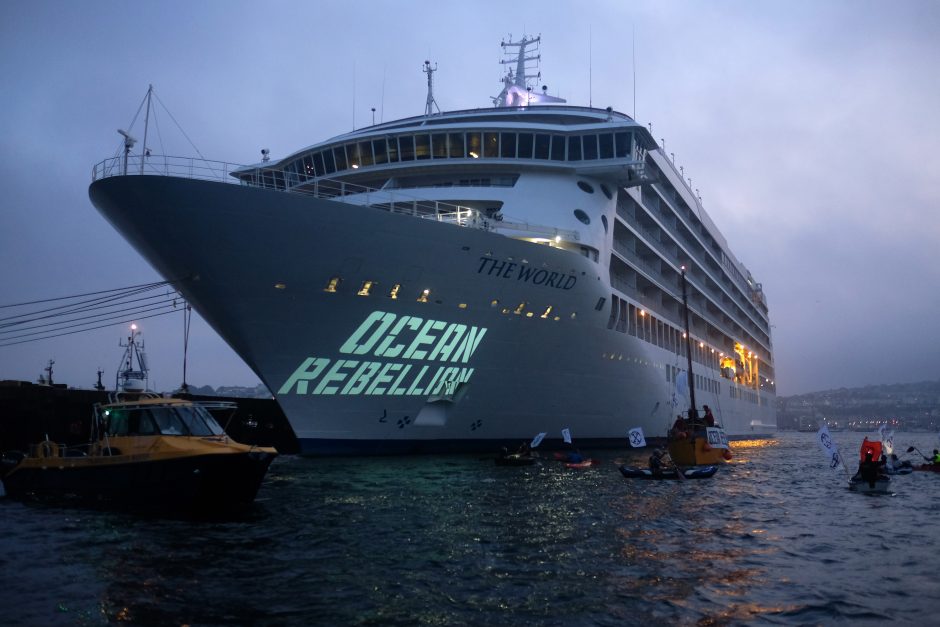 Seafaring folk and coastal dwellers in Cornwall carried out a demonstration last night against polluting cruise shipping in Falmouth Harbour.

The World is a luxury floating apartment block comprising 165 flats. It is registered in the Bahamas, enabling wealthy residents to avoid paying their taxes and to dodge environmental and employment law. [1]

Newly formed grassroots protest movement Ocean Rebellion launching today has taken to the seas with an escalating series of non-violent actions against The World luxury apartment cruise liner, currently moored in Falmouth Harbour. [2] The World emits ten times more greenhouse gases per person per mile than a jumbo jet.  Engagement with The World is the first of many actions designed to illuminate the processes of ocean degradation and shift stakeholders from ocean harm to ocean repair.

Ocean Rebellion took to the waters on the night of the 18th of August and projected a series of films onto The World luxury ship with clear messages SORT YOUR SHIP OUT and THE WORLD IS DESTROYING OUR WORLD Rebels were accompanied by a polar bear who boarded the ships bulbous bow joining the call for cruise shipping to stop. The World is directly responsible for melting over 200,000 square meters of sea ice each year rendering polar bears homeless, and bringing them to the brink of extinction.

Sophie Miller of Extinction Rebellion Falmouth, said “The oceans are the lungs of the world, it creates our weather and life on the planet began there. And yet many of us have a real disconnect from it now. I feel it’s so important to create and participate in actions like these to raise awareness and to engage people in a wider conversation about the seas and our future. With the melting of the Greenland ice shelf and the fact we are currently on track to significantly overshoot 1.5 degrees of warming, this is more important than ever.

“We also need to be aware that those in the global South are currently on the front line and are already experiencing the disastrous effects of this disconnect. Communities are suffering. People are dying and this is going to get worse unless we act now. I’m just a human and a mother who wants a habitable planet for the future.”

Ocean Rebellion, the sea-faring sister of Extinction Rebellion, has at its heart a commitment to engage with global high seas stakeholders, so as to address cascading collapses in biodiversity due to over-fishing, human caused climate change, deep sea mining and other marine emergencies.

Ocean Rebellion will be joining the rebellion in London beginning on 1st September [3]. On 6th September we will join other movements for the Marine Extinction March celebrating the glorious, beautiful biodiversity found in our seas. We will grieve the destruction of our oceans and marine life due to climate breakdown and human interference, and the loss of lives, homes and livelihoods from rising sea levels. [4]

If the UN fails in this high purpose then a global citizens’ assembly will convene to assume governance.

People are appalled by the devastation plastics have caused, choking the ocean and its life, but that’s just the tip of the iceberg. From overfishing to man-made climate emergency, from cruise liners to deep sea mining, humans are devastating marine habitats.

Living oceans mean a living planet and a living humankind.  But humans are killing the oceans.  When they die, we die. Their future hangs in the balance — and with them the future of humans and all life on Earth. Ocean Rebellion will help turn the tide.