XR’s Back – Sound the Alarm!

It’s the eve of rebellion!

2020 hasn’t been an easy year, for people or the planet. Confined to our homes, many of us have had little option but to ‘doomscroll’ and wait.

Unfortunately, the ecocidal elements of our society have been just as busy as ever. Whether it’s airlines or oil barons, pollution giants are doing everything they can to bring on a ‘dirty recovery’. Our leaders are utterly complicit in this, with policies that are leaving even their advisors worried. 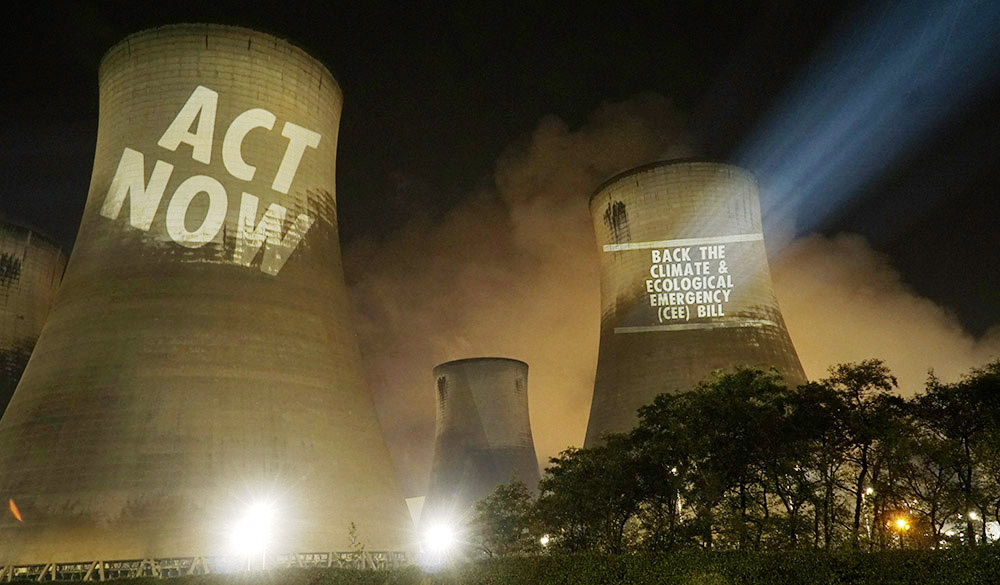 Speaking truth to power (stations) at Drax in Yorkshire!

They should be worried. This year saw the usual slew of broken records, whether it’s global heat or UK rainfall, bleak harvests or innumberable natural disasters. It’s no less true than ever that we’re running out of time, and the upheaval caused by Covid – combined with a looming COP26 – represents a once-in-a-lifetime chance to mitigate the coming horrors.

Our government – in stark contrast with its experts, the UN, and its own people – does not seem concerned. Without another option, it’s down to ordinary citizens to sound the alarm. We know this can work – and this weekend, we’ve proven how many of us are ready to do it. 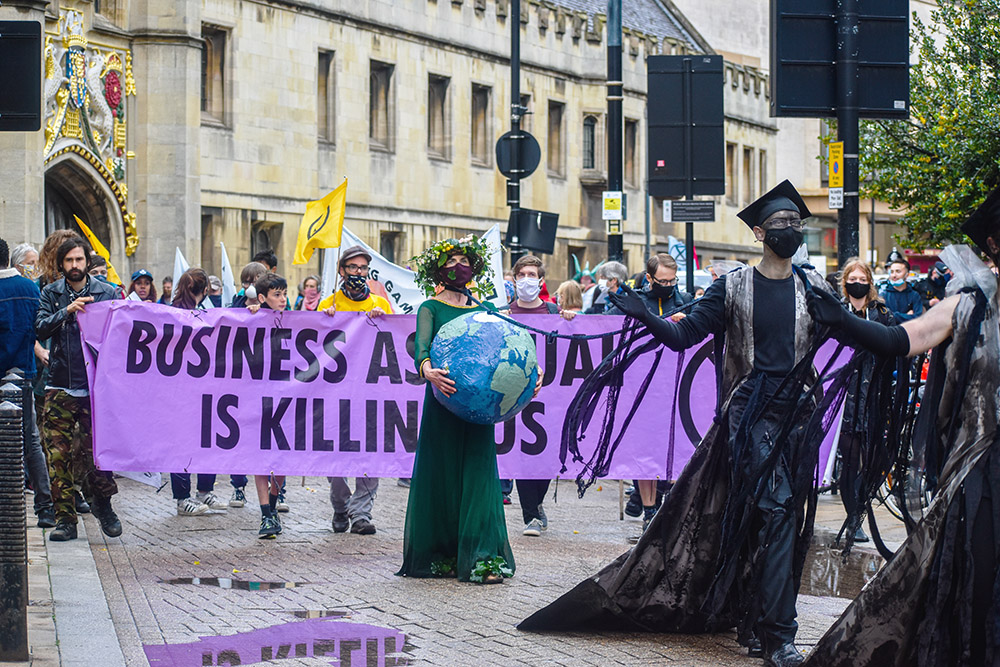 Cambridge rebels pressure the University to divest with creative actions. 9 were arrested.

From Brighton to Bristol, in London and at fuel-stations all over the country, we’ve seen creative, positive and daring actions in over 30 different places. And this is just the start.

Tomorrow, thousands will converge on sites in London, Manchester and Cardiff. It’s the moment so many of us have been waiting for; this team’s thoughts and gratitude go out to everyone involved. 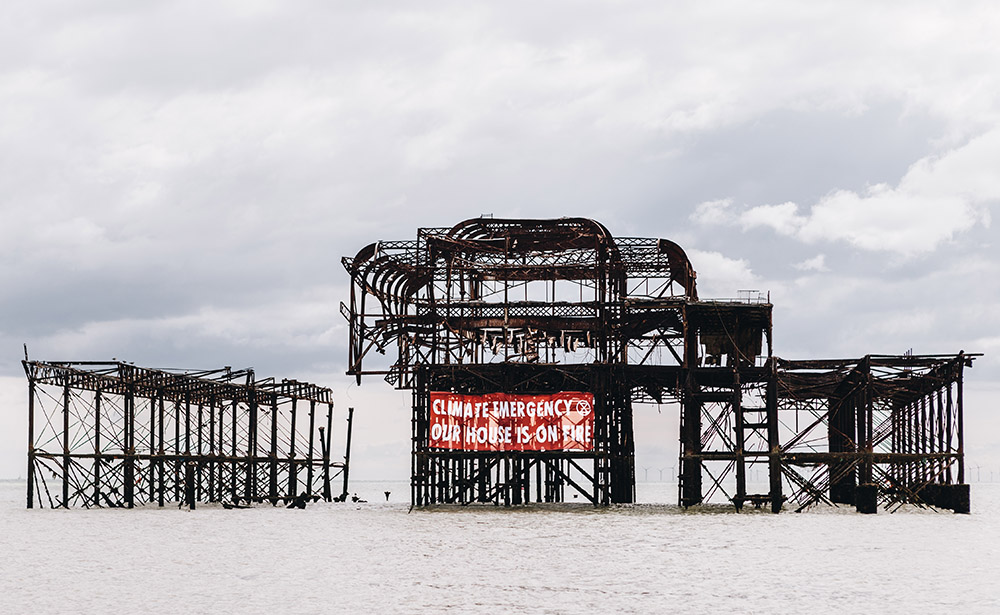 If you can’t make it onto the streets, you can still get involved: our Digital Rebellion will be running throughout, and donations could make a serious difference to those on the roads. If you’re new to our movement, looking to firm up your knowledge, or looking to spread the good word, we’ve recently released a cracking video on direct action, and a near-on-comprehensive booklet on the reasons we do what we do. And if you’re looking for some rebel energy to crackle over social media, then look no further.

The days ahead won’t be easy – but there’s nothing worth more loving effort than a habitable planet. 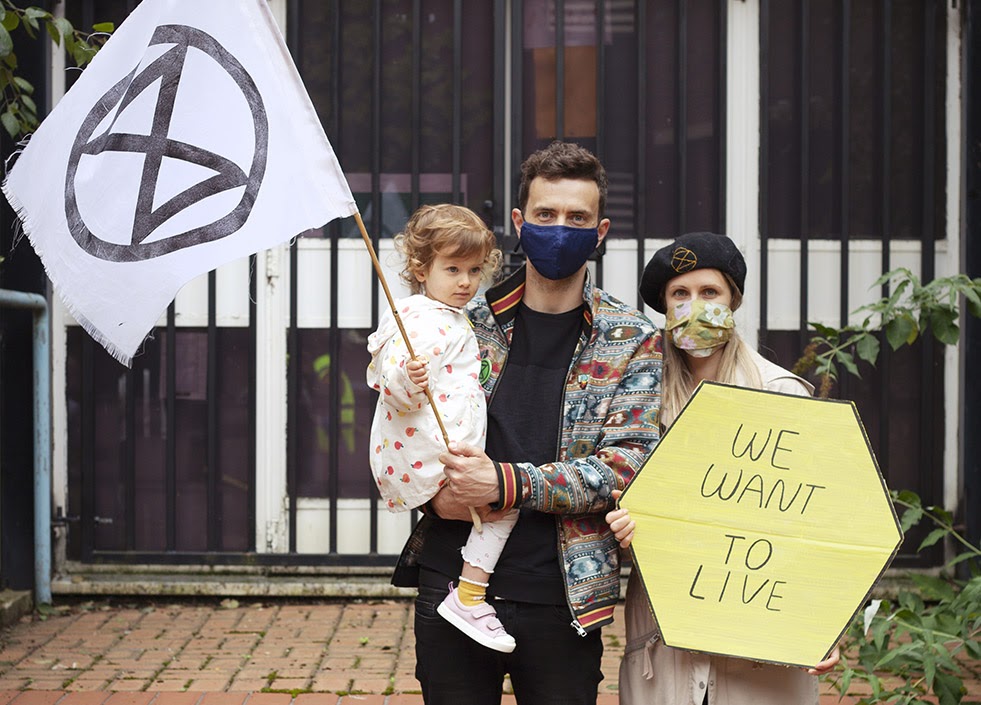 A Bromley family sports a fetching hexagon to the action outside the Council. 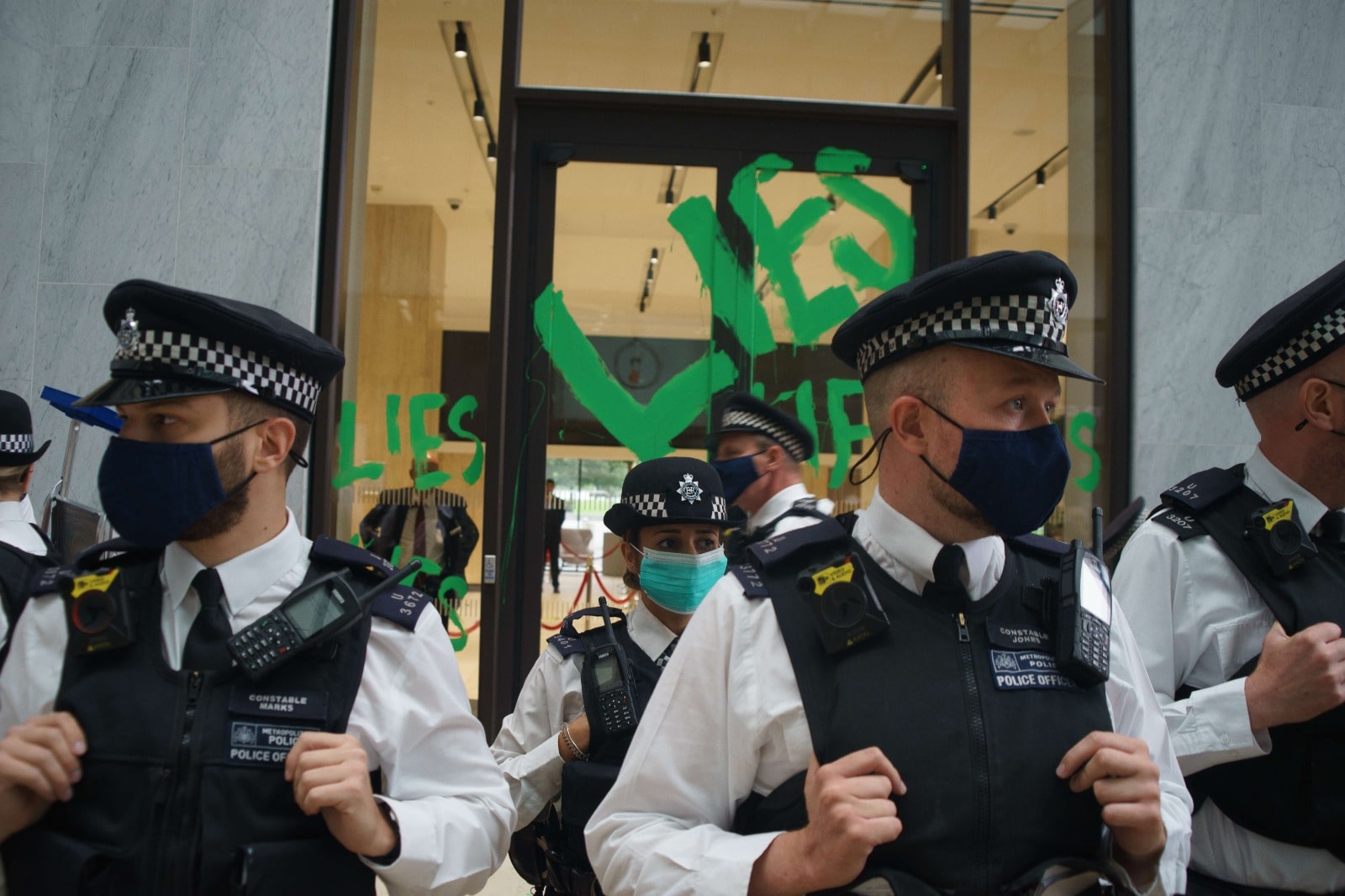 On Friday morning, two brave rebels walked up to the Shell Centre and painted “Lies” across the windows. The painters were quickly arrested, but they were just the start of the day’s actions from XR Lambeth and friends.

Soon, a crowd gathered outside the (now fenced-off) building. From a massive sound system, four speakers shared their knowledge and experience of what Shell does and how it gets away with it (so far).

Tamasin Cave of Spinwatch laid bare the brazen lobbying and greenwashing that oil companies so lavishly fund – and revealed that their greatest fear is people who can organise resistance.

Lazarus of MOSOP gave a chilling account of what resistance like this looks like in Nigeria, describing Shell’s ruthless exploitation and repression of the Ogoni people, and brought their demands straight to Shell’s head office. 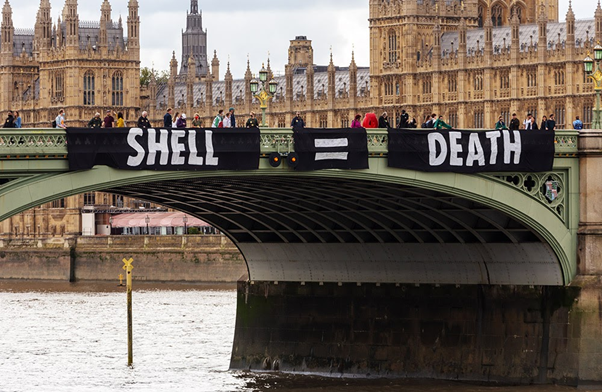 There was also a mathematical banner drop. How’s your algebra?

After more speeches, some dancing, and a ‘Shell’ piñata filled with oil, rebels left the scene informed, potentially saddened, and — at least in this writer’s case — inspired to keep fighting such blatant injustice.

HS2 Sent Off the Rails 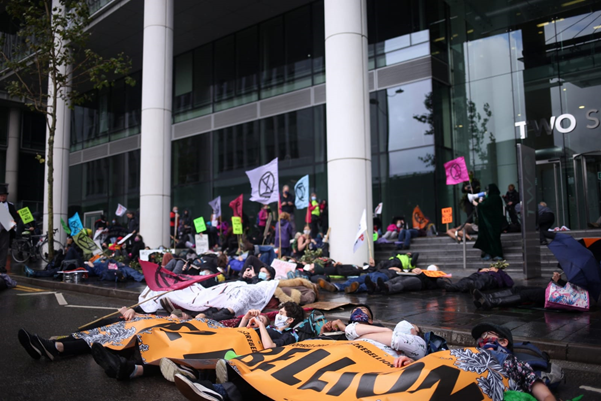 On Friday, rebels held protests at major locations along the HS2 line. They demanded that the UK government ditch the destructive rail project and switch to funding sustainable infrastructure and the NHS.

In Birmingham, rebels dressed in funeral attire gathered opposite the HS2 Curzon Street Station construction site. They heard stories from people on the frontlines opposing HS2, before holding a die-in at the HS2 Headquarters to mourn the ancient woodlands destroyed by the project. 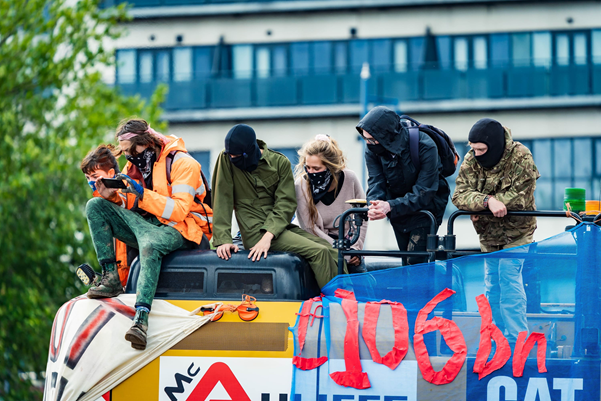 Six brave rebels scaled the fences to the Curzon Street construction site and mounted diggers to halt construction. They successfully shut down work for two hours.

HS2 Rebellion will join the Rebellion at Parliament from September 1st. 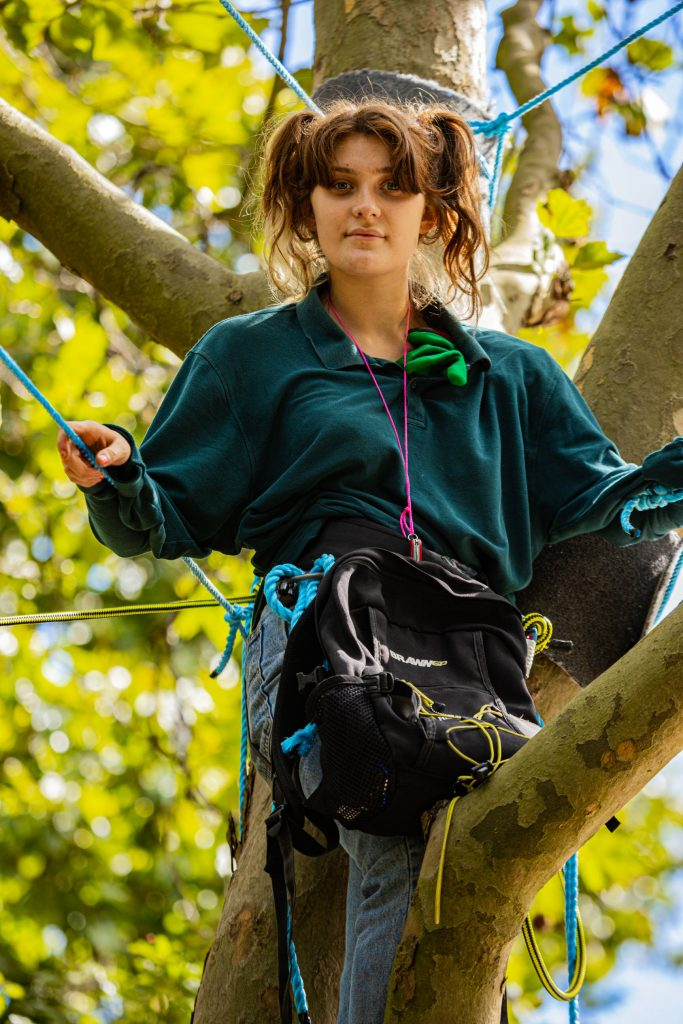 Rebels embarked on an epic, week-long voyage from Brighton with the bright red 20ft ‘Lightship Greta’. They’ll be pushing the lightship by hand and walking all the way to London to raise awareness of the journeys climate refugees are taking right now. 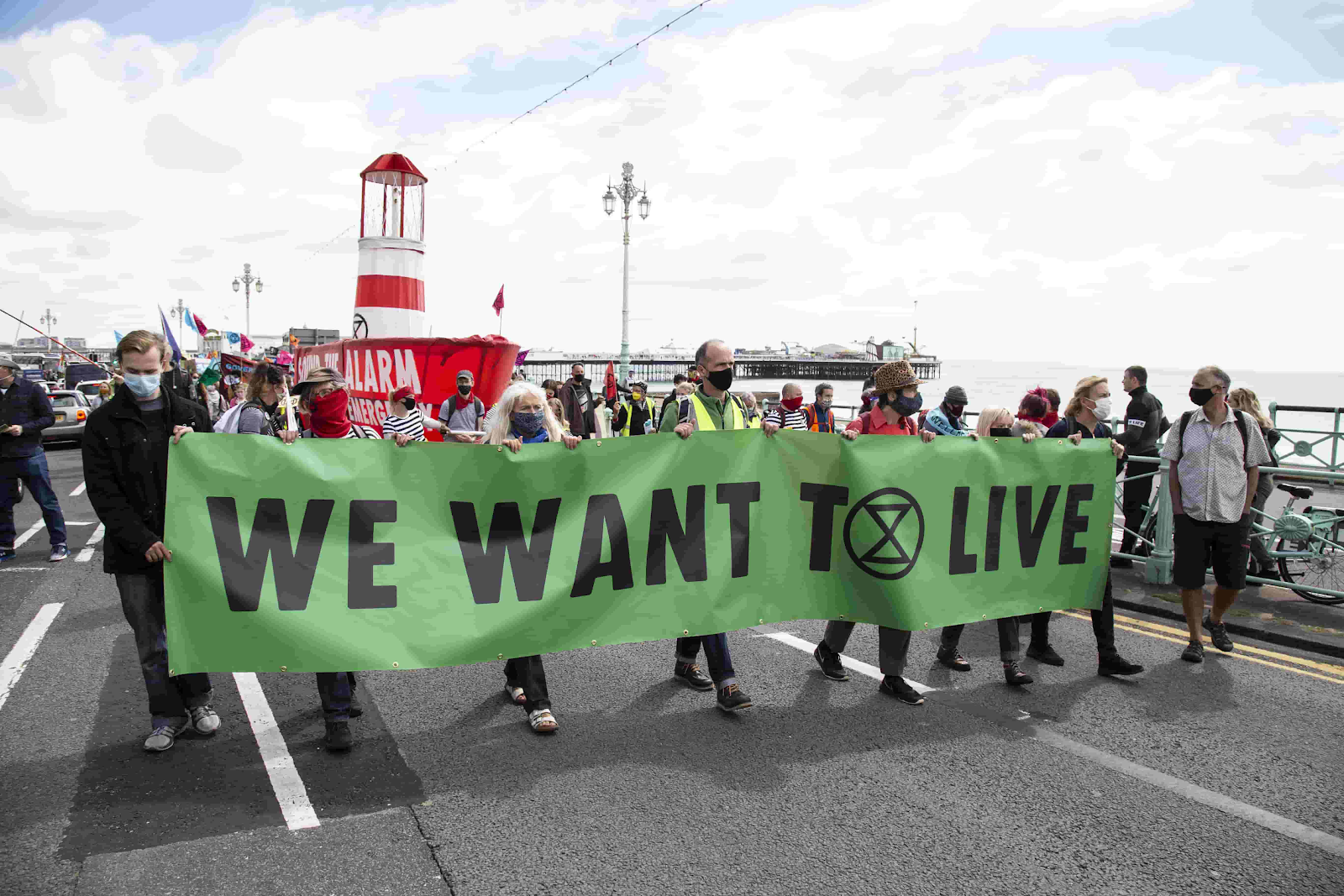 After high winds delayed their departure, the crew made good progress, arriving safely in Henfield to complete the first leg of their journey. They’ll be covering about 10 miles a day with their handmade Lightship, passing through Horsham, Crawley, Redhill, Sutton, Vauxhall and Hackney. 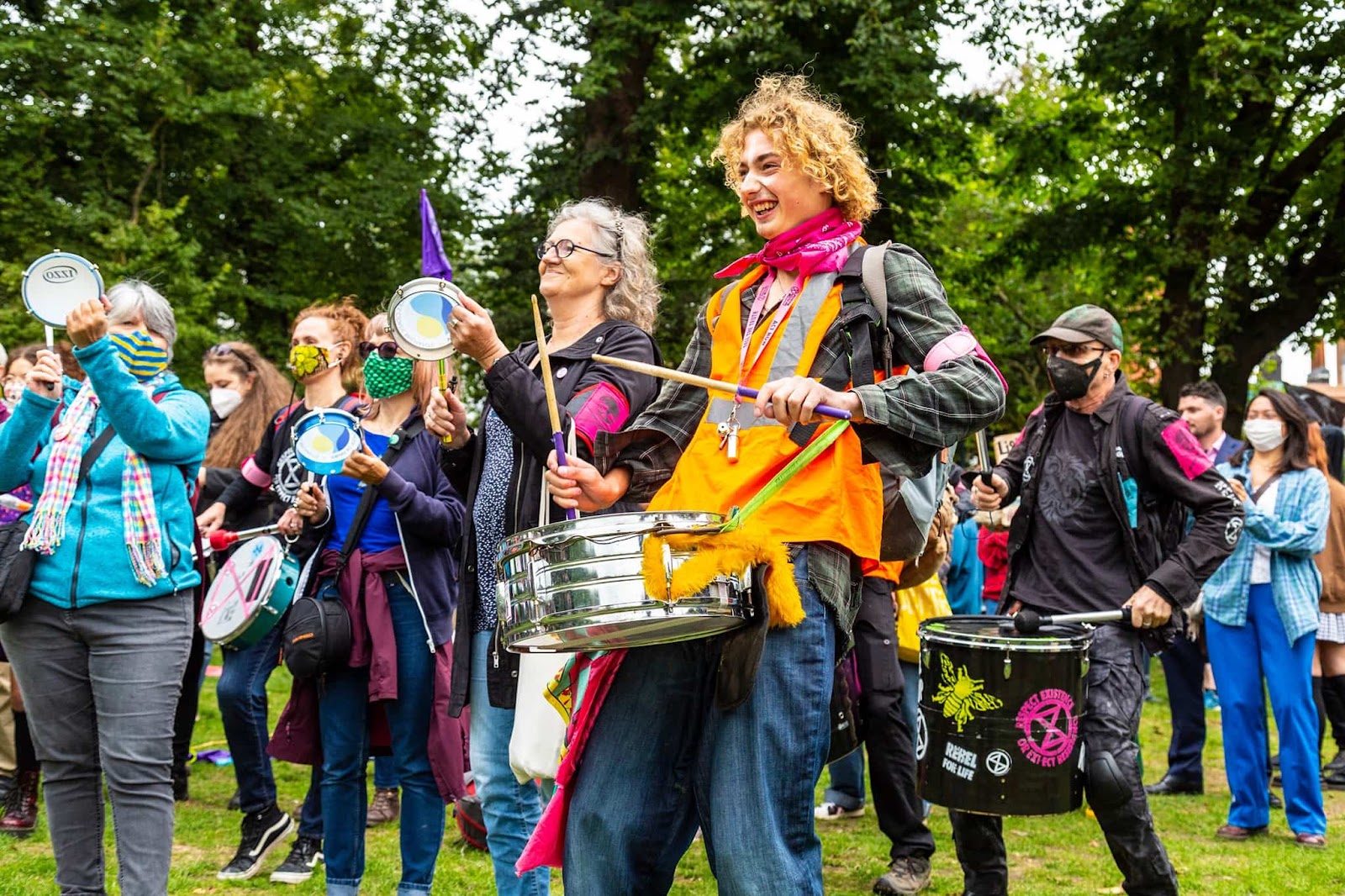 The previous day kicked off with a big action at Brighton Seafront, in collaboration with Black Lives Matter Brighton. The scene was lively and bright with marches, flags and music in the air.

Three brave rebels scaled the roof of the i360 cafe to protest against aviation’s sponsorship of the complex. They replaced the British Airways flag with a banner reading ‘Our House is on Fire’ (video here). On a nearby road, rebels spray-painted ‘BA, YOUR FLIGHTS ARE KILLING US’ in massive pink letters. 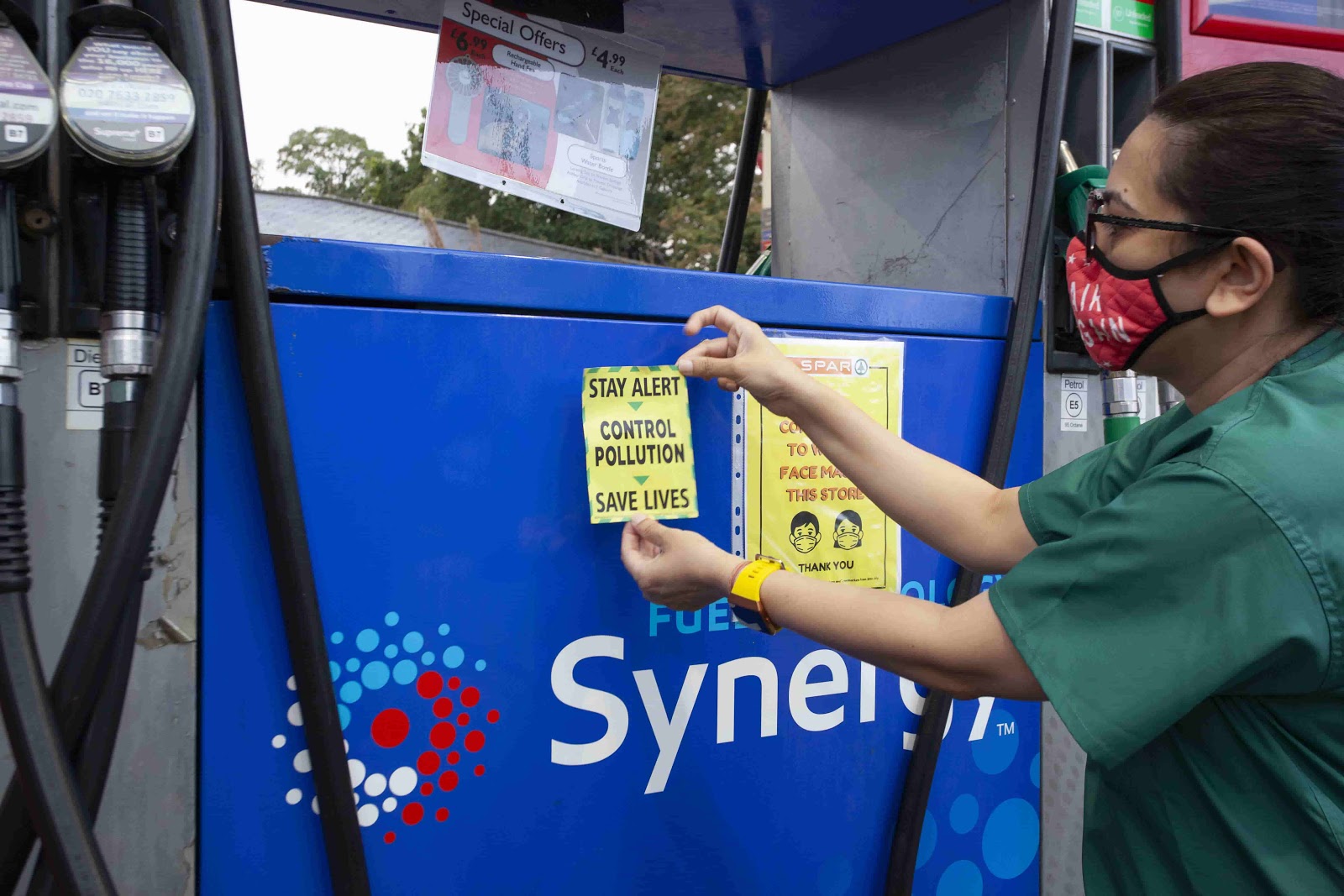 In darkest night, rebels around the country travelled to local petrol stations on a mission to inform the public about the health dangers of fossil fuel vehicle emissions. XR Doctors distributed stickers designed like cigarette packet warnings, and rebels stuck over 20,000 of them on the petrol pumps.

Dr Chris Newman, a GP in Tottenham and long-time member of XR Doctors said, “It is our duty as health professionals to warn the public that continued fossil fuel use is wrecking our life support systems.” 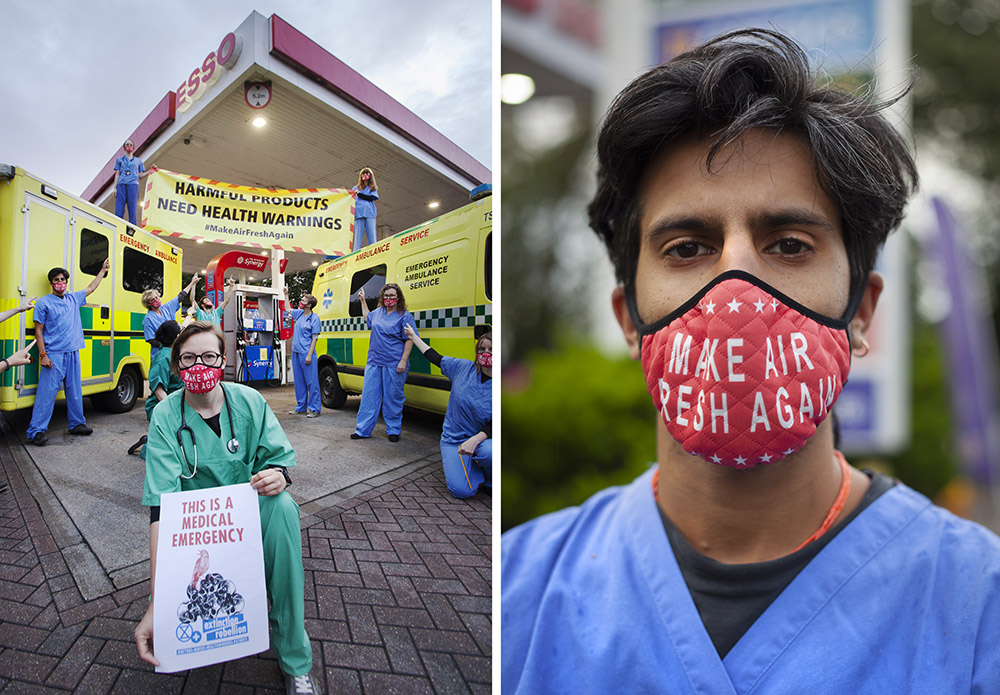 Health warnings have already been placed on fuel pumps in Sweden, and the City Council of Cambridge, Massachusetts has enacted a law requiring them. Several public health experts recently wrote in the British Medical Journal: “There is an opportunity for national and local governments to implement labelling of fossil fuels in the run-up to COP26 in Glasgow.”

It’s Rebellion time – which means there’s too much happening for one newsletter to handle! Feast your eyes on the finest photos from yet more actions in XR Unchained. 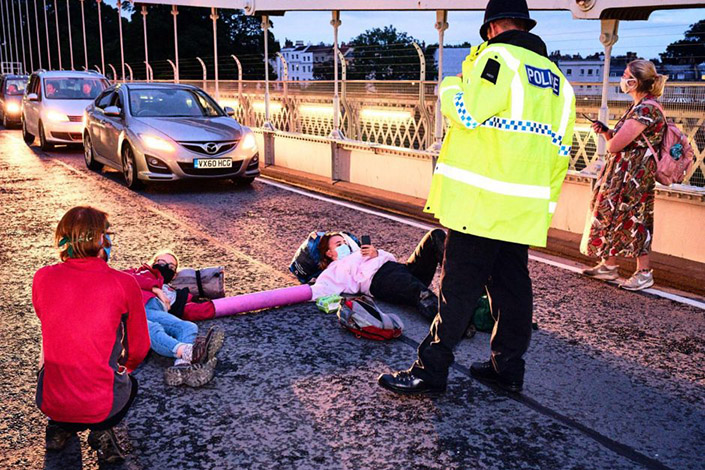 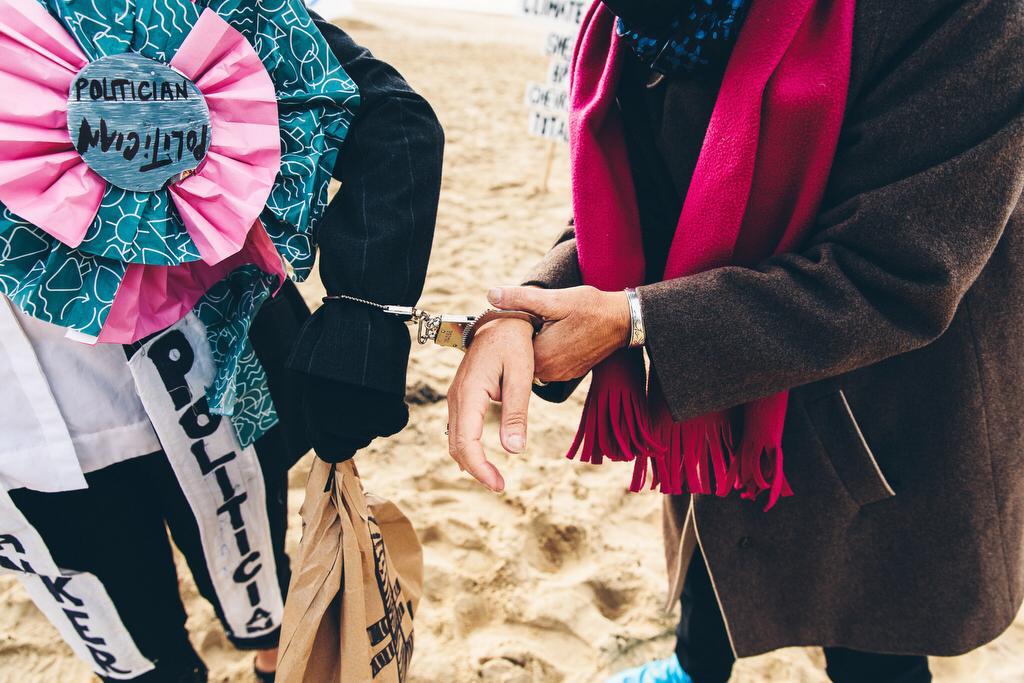 Rebels in Cornwall atoned for our climate sins by doing as the penitents did and heading to Truro Cathedral for confession. Photo: James Pearce

Faceless bureaucrats with blood on their hands at Birmingham HS2 offices. 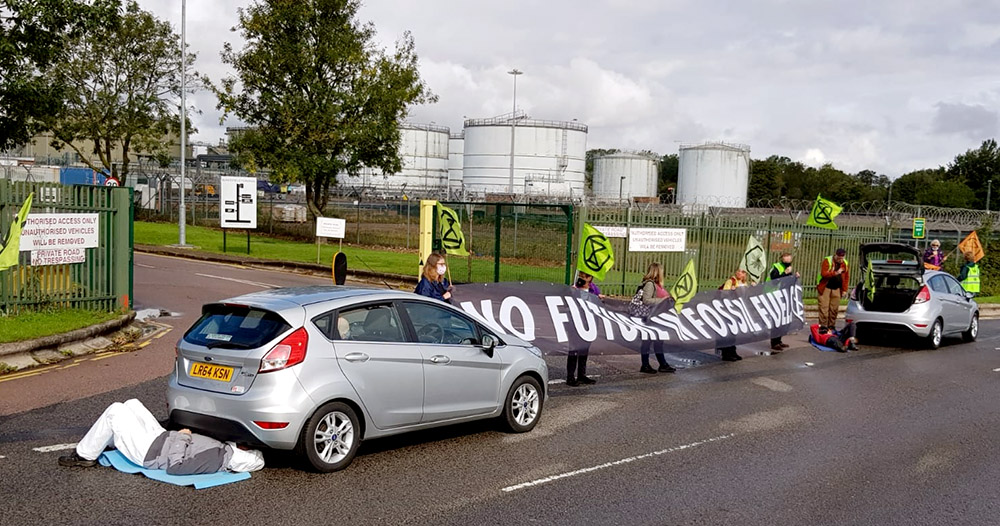 Rebels from St. Albans lay down and locked on to block access to the Buncefield oil depot in Hemel Hempstead. The depot’s pipelines supply Gatwick and Heathrow with millions of litres of fuel each year. 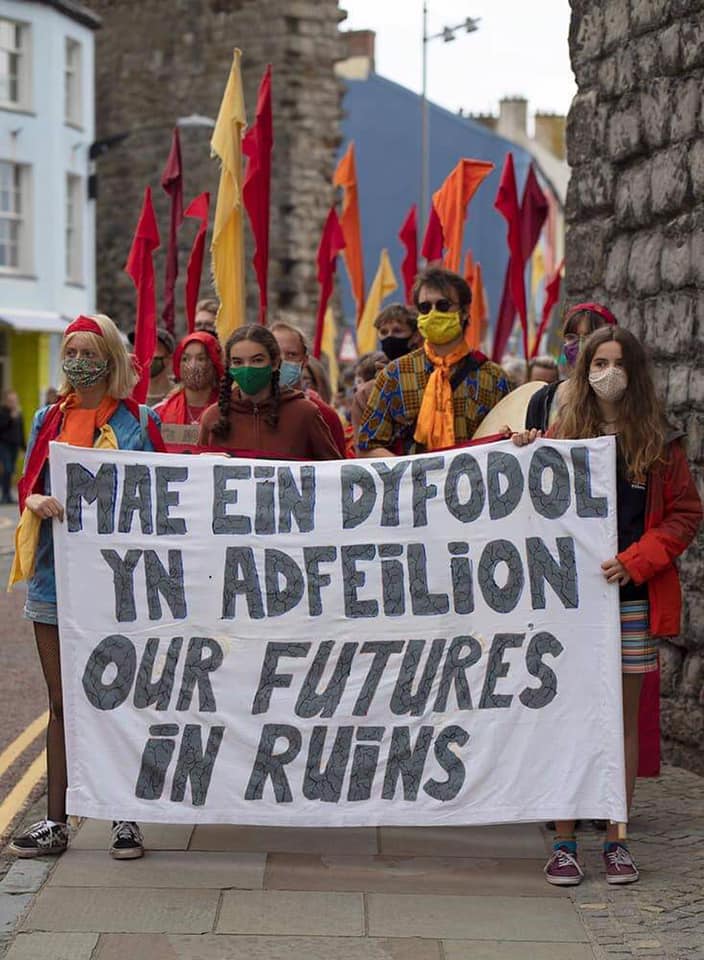 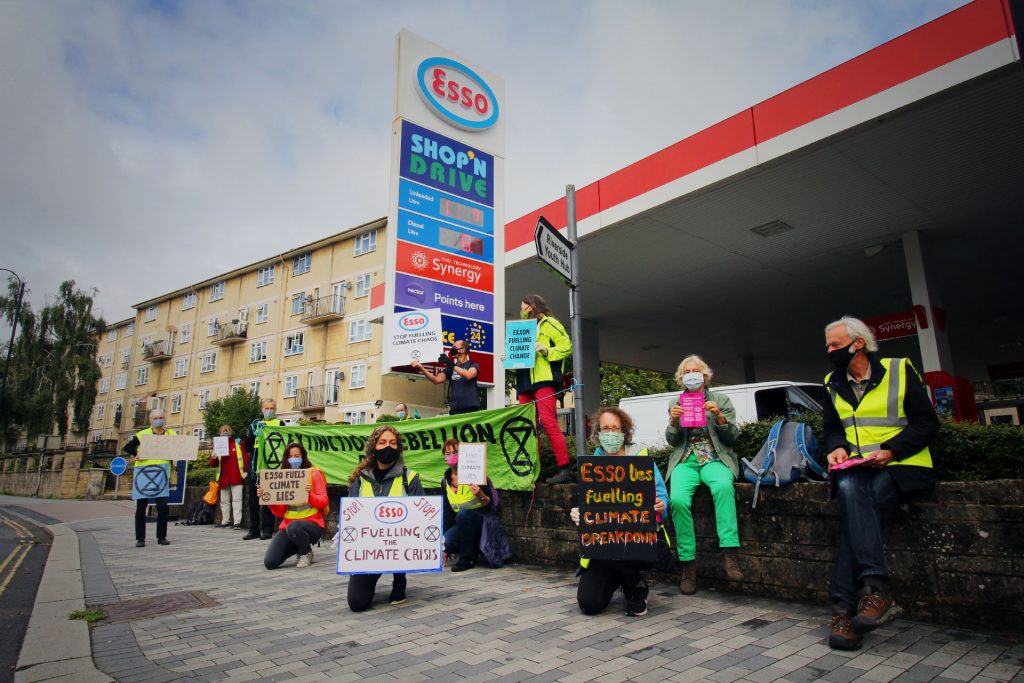 XR Bath rebels assemble to tell Esso what they think of its polluting ways. Check out the video of their day here. 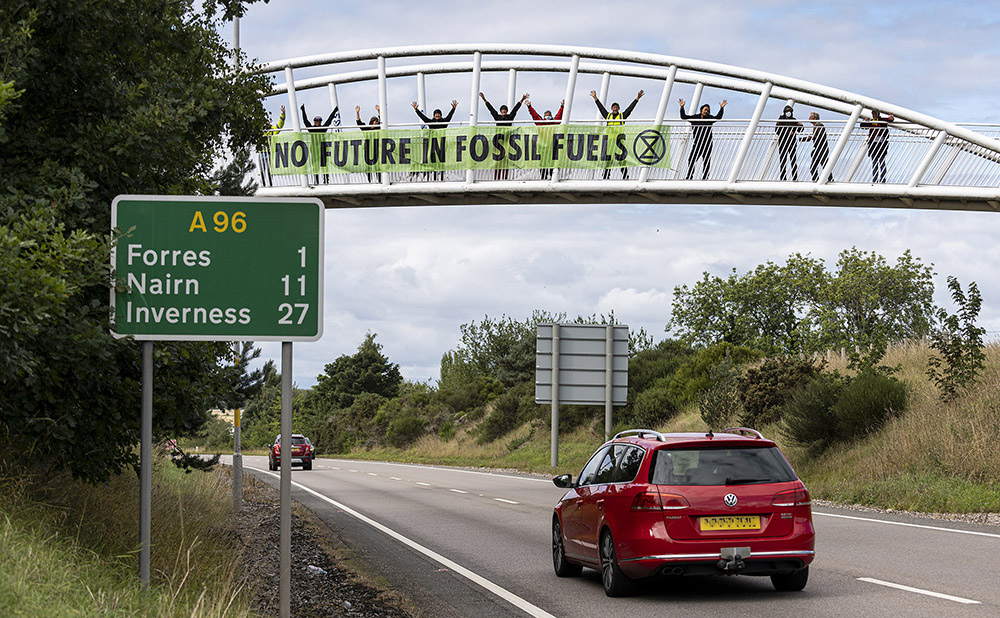 Over the weekend, there were so many beautiful banner drops it could well be a UK record. This one took place near Forres, Scotland. Photo: Mark Richards 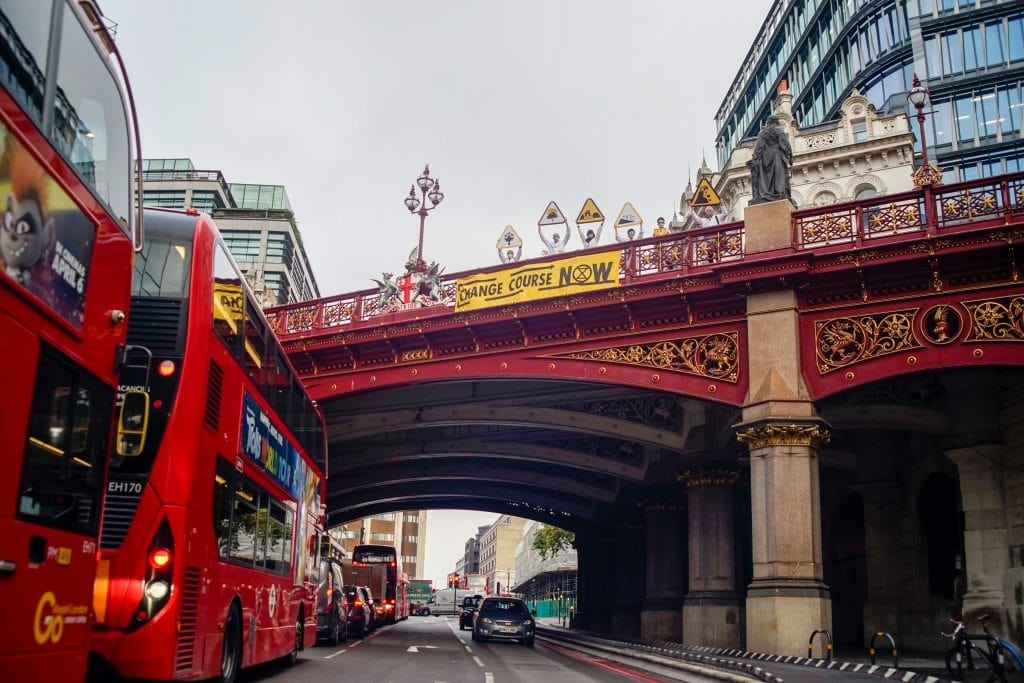 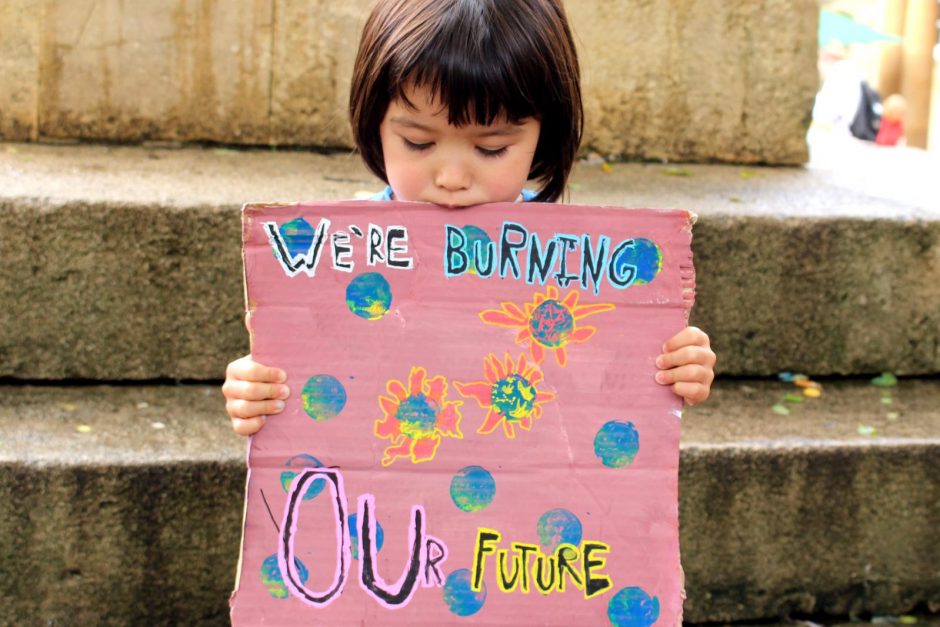 If you’re in London, check out the super useful London Actions and Speaker Schedule for a regularly-updated run down of where to be and what’s going on. This is by no means an exhaustive list!

Rebels in Wales, The Cardiff Action Schedule is jam packed full of events and actions. These will be updated as news comes in!

Northern rebels, find The Plan here and here. Keep a weather eye on these emails and the Telegram Broadcast for further updates. 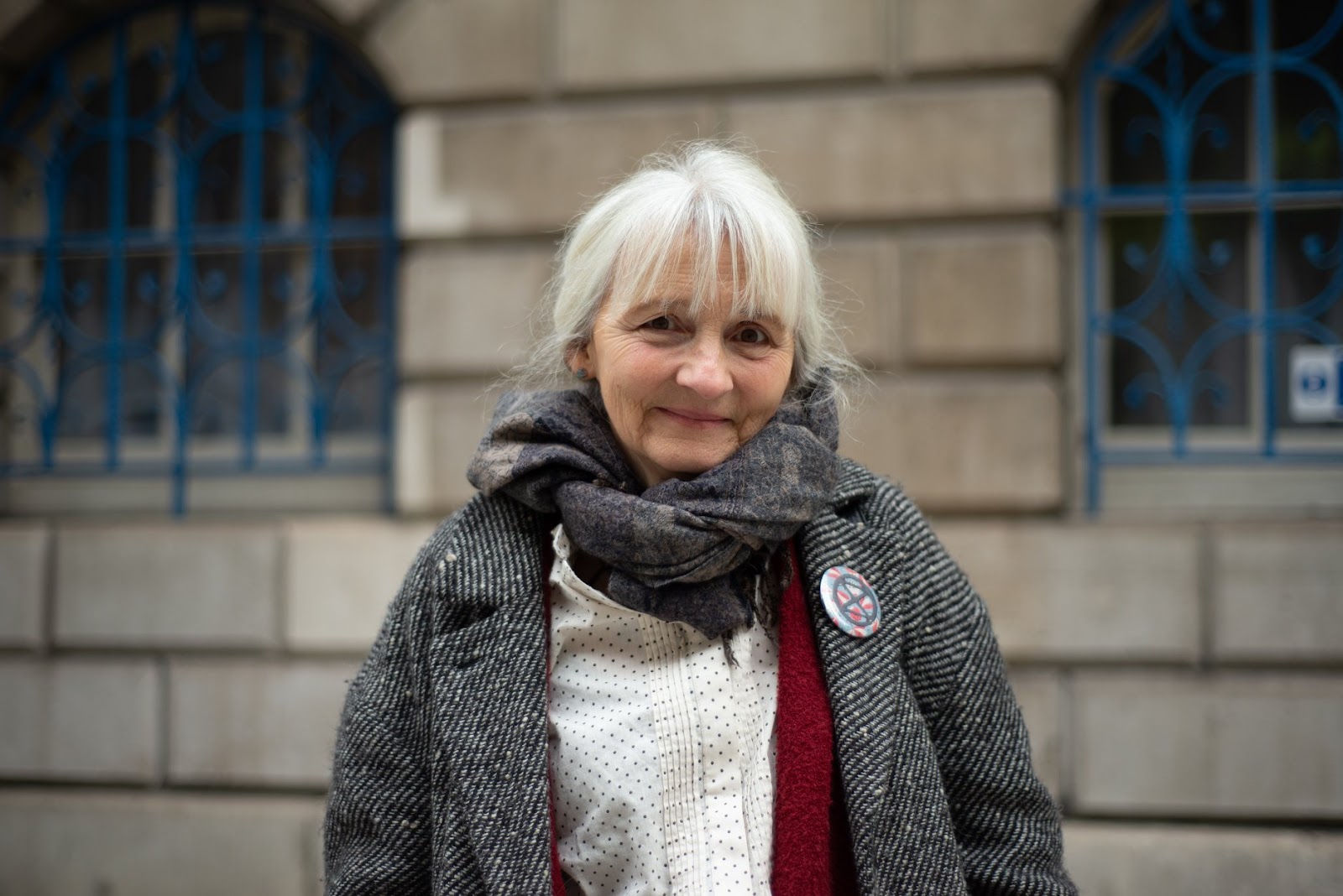 Sue delivered this statement on 8th November 2019 at the City of London Magistrates Court. She was given a six-month conditional discharge and ordered to pay £105 in court costs.

“I plead guilty as charged. In April I sat down on the road as part of a peaceful road blockade.

“I am 67. I am a retired primary school teacher and a potter. I am a mother and a grandmother. I feel a huge sadness and I am fearful for the future of all my family, for all living creatures and for our beautiful world.

“When I sat down in the street at Marble Arch I was thinking of my beautiful grandchildren and their future. I want them to know that I tried my hardest to avert climate catastrophe. I do not want to look back and feel I did nothing to stop the destruction of our wonderful earth, the only home we have.

Thank you for reading. There’s so much exciting stuff going on we barely have time to write this sign-off. Keep up the good work!