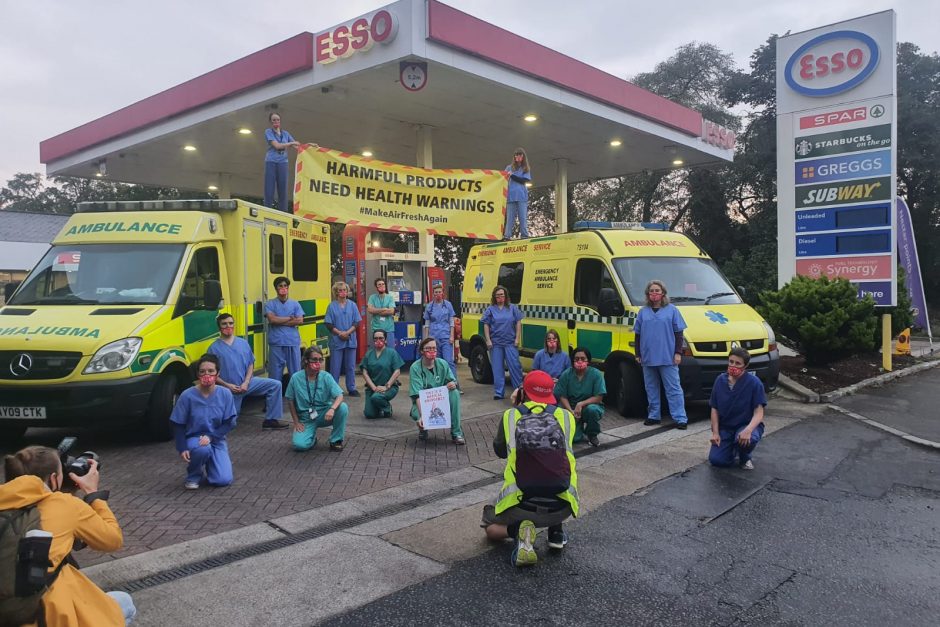 This is a health emergency! Doctors spark mass flyposting of petrol pumps with graphic health warnings across UK

Last night, over 20,000 warning labels were stuck to petrol pumps all over England, Scotland and Wales, as part of a national campaign led by Doctors for Extinction Rebellion.

Graphic labels were designed by the doctors to resemble existing cigarette packet health warnings; the government’s “Stay Alert” coronavirus banners; and the wartime “Your country needs you” posters, with David Attenborough’s face replacing that of Lord Kitchener.

They sent stickers out for free to over 300 Extinction Rebellion groups to raise awareness of the severe health impacts of fossil fuels.

To make their point clearer the group stood on ambulances (hired from an events company) to protest at a petrol station this morning, with a banner saying “Harmful Products Need Health Warnings”.

“There is an opportunity for national and local governments to implement labelling of fossil fuels in the run-up to COP26 in Glasgow, and in particular for the UK Government, as the host of the COP, to show leadership, as part of a package of measures to accelerate progress on getting to ‘Net Zero’ emissions.”

These warning labels aren’t the first attached to fuel pumps. After years of campaigning by the Swedish Association of Green Motorists, the first “Eco-labels” were put on Swedish fuel pumps on July 6th this year [2] Cambridge, Massachusetts also unanimously passed a law on January 13th 2020 requiring public safety warnings [3] at fuel pumps. aA petition has just been published on the government petition’s page calling for the same in the UK [4]

In particular the group raised concerns about the levels of pollution in inner city areas. The ambulances action took place in the London Borough of Newham, which has the highest levels of particulate pollution in the country despite having the 4th lowest car ownership [5] [6].

Co-Founder of the Doctors for Extinction Rebellion group Dr Chris Newman, a GP in Tottenham said: “It is our duty as health professionals to warn the public that continued fossil fuel use is wrecking our life support systems. We no longer have time to ask for permission. As a group we will continue to do what the science and our duty of care asks of us, and we urge our government to do the same. If we must break the law to do our duty, then we will do so.“

Consultant child psychiatrist and relief worker, Dr. Lynne Jones OBE said: “There is growing evidence that air pollution is associated with learning difficulties in children, and may affect the baby in the womb, increasing the risk of autism. Fossil fuels are damaging our children’s brains before they’re even born, and we have to do something about it.“

Maggie Fay, Dementia Specialist Nurse and co-founder of Earth Nurse said: “Fellow nurses all around the world are seeing the impacts of climate change in their daily practice right now. They manage kidney failure during heatwaves. They care for malnourished children in times of famine. They bandage wounded soldiers in climate-induced conflict. Climate change amplifies this suffering, and fossil fuels are the main driver. We must do whatever we can to make fossil fuels a thing of the past.“

Dr David McKelvey, GP in Salford said: “By strengthening cycle networks, increasing public transport, building on the growth in teleworking, and encouraging localism we can make the air cleaner, our climate safer and our neighbourhoods better places to live. This drive to get off fossil fuels and move rapidly away from the internal combustion engine will clearly improve our patients’ health.“