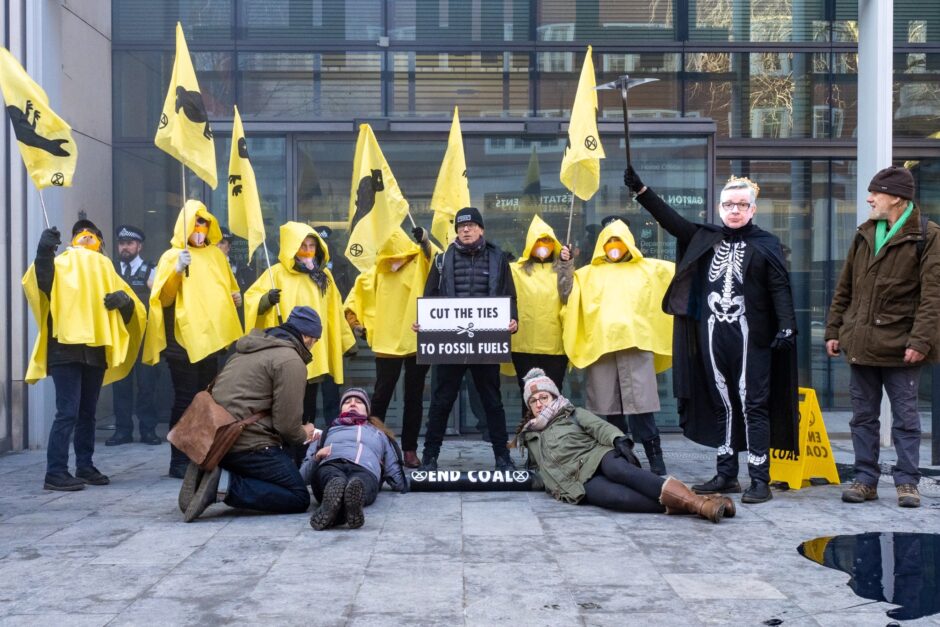 At 11.30 this morning, Extinction Rebellion took action outside the Department of Levelling Up, Housing & Communities in London in light of Michael Gove’s contentious decision to allow coal mining at Whitehaven, Cumbria.1  The mine will be the UK’s first new deep coal mine for 30 years.2

Black paint has been poured down the sloped walls towards the front doors of the Marsham Street Department, two people are in front of the entrance attached to each other through a lock-on tube with the words ‘END COAL’ on it. Two others are glued nearby.

Sarah Hart, a mother of two from Farnborough said: “2022 saw record global greenhouse gas emissions, and record global temperatures. Where is the government’s ambition to act on this Climate and Ecological Emergency? How dare they even think of opening a coal mine now? Gove claims this mine is carbon neutral but he completely ignores the emissions from burning the coal. We demand an end to all new fossil fuel projects.”

Scope 3 emissions (from burning coal or oil) are currently not considered in the plans for the mine. Only emissions for physically taking the coal out of the ground are considered, which can be claimed to be a lower category of emissions. However, if they took into account the scope 3 emissions – the transport of the coal to the client and the burning of it – then it would be outside the Government’s net zero strategy.3

Marijn Van Der Geer of Extinction Rebellion UK, said: “Extinction Rebellion wants a citizen-led transition away from fossil fuels via a Citizens’ Assembly on Climate and Ecological Justice. Providing unstable jobs in the coal sector during a climate crisis in a region where there are limited economic opportunities is not justice. Opening a coal mine in a region that is already disproportionately affected by the climate crisis with floods increasing and unprecedented rainfall is complete madness.”4

Dorothea Hackman, a 70 year old grandmother from Camden said: “Opening a coal mine today means the UK can’t argue that China and India should decrease their own coal emissions. Whitehaven coal isn’t even wanted by British steelworks, it’s going to be exported, there is no argument for domestic production.”

The action is part of a series of ‘Cut the Ties’ actions which launched in November 2022 simultaneously at 13 sites across London. The campaign targets a web of organisations propping up the fossil fuel economy. November’s actions resulted in 17 arrests.5

Extinction Rebellion is inviting everyone to Westminster from 21 April 2023 to demand a fair society and a citizen-led end to the fossil fuel era. ​Find out more about The Big One.

2. Cumbria coal mine: Will it threaten the UK’s climate targets? https://www.bbc.co.uk/news/explainers-56023895

“Prof Rebecca Willis, from Lancaster University, said: “West Cumbria Mining claims the planning inspector should ignore the carbon emissions that come from burning the coal from the mine. But the climate won’t ignore these emissions. The UK has a legal commitment to far-reaching climate action, and this mine takes us in exactly the wrong direction.”

4. Are the Cumbria floods due to climate change? https://blogs.nottingham.ac.uk/newsroom/2015/12/11/are-the-cumbria-floods-due-to-climate-change/