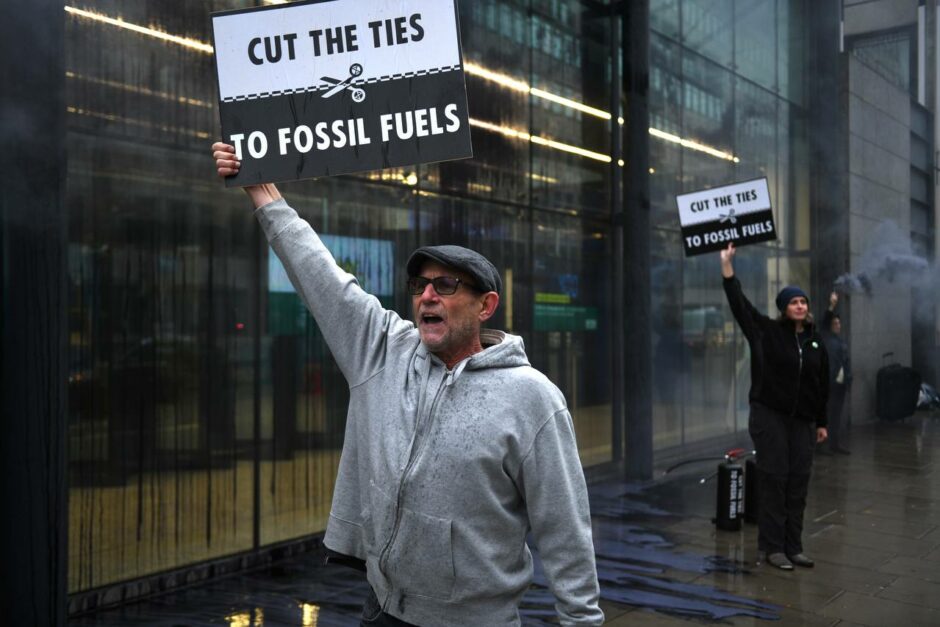 From 11am on Monday November 21st, Extinction Rebellion and other aligned groups took nonviolent action at thirteen sites across central London, targeting the offices of companies and organisations which have links to the fossil fuel industry. The groups sent a universal message that it’s time to ‘cut the ties’ with fossil fuels.

The actions follow the conclusion of COP27 in Egypt, which was widely critisised for the heavy presence of representatives of oil and gas companies. [1] Hill+Knowlton Strategies, one of the companies targetted today, has worked for fossil fuel companies ExxonMobil, Shell, Chevron and Saudi Aramco and recently managed communications for Egypt’s presidency of the UN climate conference at Sharm El Sheikh. [2]

Extinction Rebellion spokesperson, Sarah Hart, said: “Behind incomprehensible government decisions to double down on fossil fuel development, sign off new oil exploration licenses and allow the big energy companies to rake in record profits, lies a network of companies and organisations that are profiting from this destructive path.

“While the rest of us worry about the cost of turning the heating on our government is prioritising the profits of the very companies that are jeopardising our climate and environment. But everyday people are way ahead of politicians. They want to be able to heat their homes and they want a future for their children.

“So today, Extinction Rebellion are sending the message that it’s time to cut the ties with fossil fuels or lose the social license to operate in the UK.”

DETAILS OF THE ACTIONS:

Writers Rebel at the Institute of Economic Affairs, Lord North Street
Writers Rebel poured fake oil on the front steps of free market think tank the Institute of Economic Affairs. The institute, located just meters from the Houses of Parliament, has received money from fossil fuel companies, regularly publishes materials questioning the consensus on climate science and has huge influence on politicians. [3] [4] [5]

Doctors for XR at JP Morgan, Victoria Embankment
Doctors for XR glued themselves to the windows at the London HQ of JP Morgan and pasted images to the front facade of the building depicting scenes of climate breakdown both here in the UK and overseas. JP Morgan are the world’s biggest fossil fuel financiers. [6]

A spokesperson for Christian Climate Action, said: “The Church should be showing moral leadership in rejecting profiting from investments in companies that continue to fuel climate suffering.”

Plastics Rebellion at Ineos offices, Hans Crescent
Plastics Rebellion sprayed fake oil outside the offices of Ineos, one of the world’s largest petrochemical producers and a significant player in the oil and gas market. Many of the plastics produced in the UK start their life at the INEOS Grangemouth refinery. [10]

XR East of England and XR Youth at Schlumberger offices in London, Buckingham Gate
XR East of England and XR Youth poured fake oil over a globe at the offices of the world’s largest oilfields services provider Schlumberger to expose their complicity in ecocide. As the world’s largest oilfield services provider, Schlumberger enable fossil fuel extraction, operating in 120 countries around the world, with over 36,000 patents dedicated to extracting every last drop of oil and gas from the ground. [13]

Ocean Rebellion at the International Maritime Organisation, Albert Embankment
Ocean Rebellion held protests outside the offices of the International Maritime Organisation where performances illustrated the UN shipping body’s refusal to regulate shipping emissions. A heavy plume of smog filled the air and an oil slick appeared on the ground with dead birds caught in it.

A spokesperson for XR South East, said: “The addiction to fossil fuels must end. The huge fossil fuel corporations like BP and those who aid and abet them KNOW what we face. BP hides the dirty secrets that lie behind its latest big profit of £7,100,000,000. Enough is enough. Today we are exposing the ties between the collaborators and we will piece together the web of lies with our actions.”

XR Rhythms (marching between the locations listed above)
In June, London endorsed the Fossil Fuel Non-Proliferation Treaty, so XR Rhythms is marching through London to highlight the web of fossil fuel enablers still working in our city. We want to drum out fossil fuel investments and celebrate the future transition to a more sustainable economy! [16]

[4] How vested interests tried to turn the world against climate science: https://www.theguardian.com/environment/2019/oct/10/vested-interests-public-against-climate-science-fossil-fuel-lobby

[8] BAE Systems sold £15bn worth of arms to Saudis during Yemen assault: https://www.theguardian.com/business/2020/apr/14/bae-systems-sold-15bn-arms-to-saudis-during-yemen-assault

[16] London endorses global Treaty calling for an end to the fossil fuel age and a just energy transition: https://fossilfueltreaty.org/london