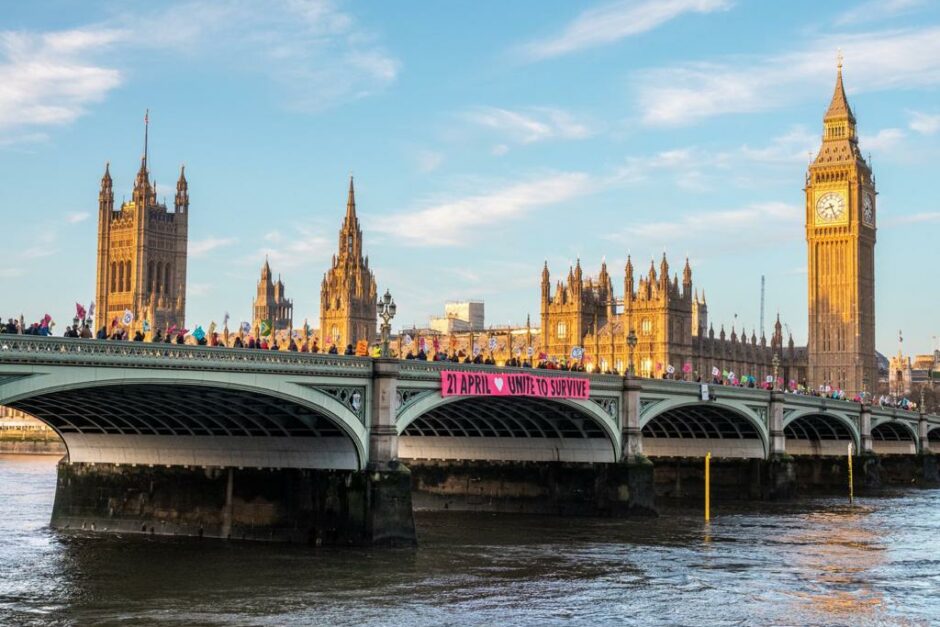 BREAKING: Just after 8am this morning, Extinction Rebellion UK dropped a large banner from Westminster Bridge in London that reads ‘APRIL 21: UNITE TO SURVIVE’. A group had marched with flags from Jubilee Gardens along Belvedere Road where they stood in single file off the road, forming a chain across the length of the bridge. When there, an important message was passed along a human chain from one side of the bridge to the other, symbolising connection across divides.

The action officially launches Extinction Rebellion’s ‘100 Days’ campaign – the biggest mobilisation campaign XR has ever undertaken. With it, a new Crowdfunder is set in motion with a £1million target by 21st April, 2023, when 100k are expected to stand together outside the Houses of Parliament.

Today marks the 100 day countdown to ‘The Big One’ on 21st April and is encouraging millions of conversations with friends, family, colleagues and strangers, as well as organisations across and beyond the environmental space, to bring 100k people to Westminster. With Extinction Rebellion’s official ‘ticker’ count revealed to show over 7,000 people ready to be there, this powerful targeted campaign aims to reach new audiences with an accessible, inclusive and easy-to-understand invitation to bring the remaining count into active resistance.

Anna Hyde of Extinction Rebellion UK, said: “The climate, ecological and biodiversity emergencies are not distant threats – they are happening right now, unevenly affecting many – ultimately affecting everyone, and life on Earth is at stake. Covered up by corrupt media, those in power continue to profit from the crises unravelling around us. The fossil fuel era must end, and restoration of the world must begin. This is where solidarity comes in.”

Dr Stephanie Williamson, Ecologist/Entomologist from Scientists for XR, said: “We must build bridges and come together across differences to unite for our very survival. To address the climate and ecological emergency together is to transform to a just and free future for all. Everyone is ready and crying out for change. Build bridges, build momentum – build to 100,000 people taking action together in 100 Days.”

Integrated with XR’s methodical mobilisation campaign Project 3.5, thousands of people with a shared purpose will build bridges of inclusion and cooperation over the coming months. As the days count down, momentum, relationships, resilience, trust and numbers build up.

Following Extinction Rebellion’s New Year statement stating that we will “disrupt the abuse of power and imbalance” by targeting the true perpetrators, all signs at this chaotic time in history point toward cooperation between groups and movements taking our love and rage to the seat of power in Westminster. Horrified by the climate disasters unfolding around us, thousands in the UK are ready and waiting to do the work the government is unwilling to do.

Dr. Caroline Vincent of Scientists for XR, said: “Disruptive protest has done so much to change the conversation around the climate and ecological emergency over the last 4 years; more and more people are waking up to realities of the climate crisis, and more and more are saying they want immediate and decisive action.

“The reality is however, that as the general public becomes more concerned, the government in the UK backtracks on its already meagre climate promises, sanctioning a new coal mine in Cumbria at the end of 2022. So, the government isn’t listening and the only way that changes is by all of these newly concerned people recognising their own power and stepping into active resistance. At the same time, the Government is clamping down on the right to protest and criminalising those raising the alarm. In the current circumstances it’s clear that only larger numbers of people taking peaceful action together over prolonged periods will prove impossible to ignore.”

The latest draconian attempt by the government to shut down and criminalise effective protest is only increasing public sympathy toward brave activists using their voices to stand up for justice and the loving protection of all humanity. Public opinion polls now show that support for direct action has never been higher.

Gathering at the Houses of Parliament day after day in large numbers in April means we can leave the locks, glue and paint behind and instead demonstrate faith in a critical mass of people to create a moment that’s impossible to ignore. The invitation is to all humans, all movements, all organisations to come together and stay for as long as you can.