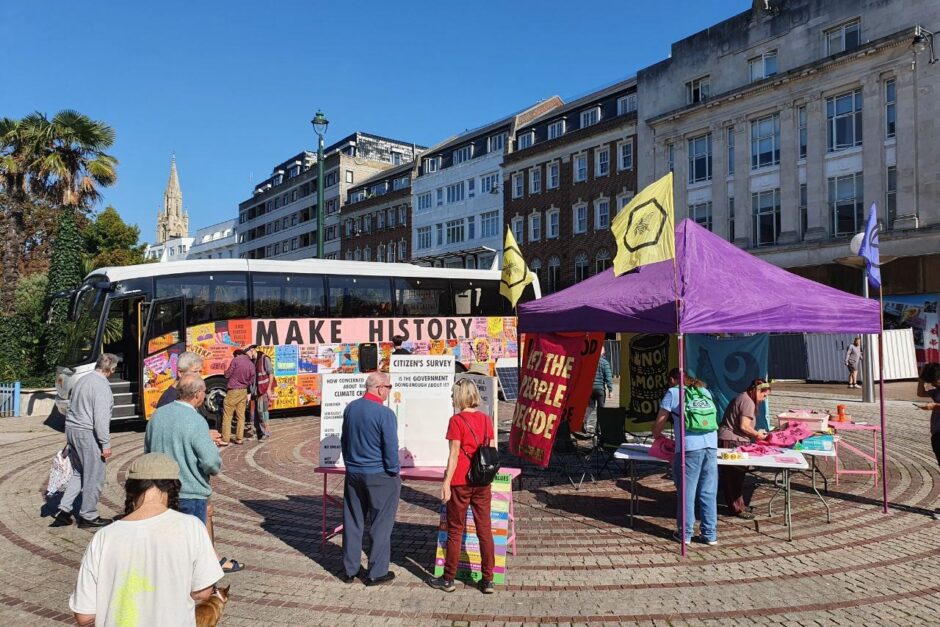 This Autumn XR embarked on an ambitious national programme – a UK-wide three-week tour of more than 60 towns and cities from Inverness to Belfast and Teignmouth, to grow the movement and tell people about deliberative democracy.

On 21 September three Extinction Rebellion buses set off in a blaze of glory. The Western route visited Bournemouth, Exeter, Taunton, up to Stroud, Cardiff, Machynlleth, to Bangor/Wrexham, over to Dublin, then on to Belfast. The Middle Route started at Preston, on to Manchester, up to Penrith and Glasgow, across to Edinburgh, then up to the top of Scotland in Inverness and Aberdeen. The Eastern route started in Lincoln, next to Nottingham, on to Sheffield and York, Leeds, then up to Durham, Newcastle and Gateshead.

The aim: to build a strong national movement by signing up new members, creating awareness about XR, and holding People’s Assembles to find solutions to the climate and ecological emergency and show how deliberative democracy works.

The stops were chosen where there were already local XR groups. This was vital as Abram on the East Tour commented how local rebels “had local connections and had got people involved”. Dolly on the West route agreed, “Local groups were really supportive”.

Alex, a West crew member explained how it worked: “During this tour we’ve gone into communities to speak to people about the climate crisis, the energy crisis, and how people aren’t going to be able to pay their bills”.

Alex said, “We talked about how we need to get out on the streets. Everyone knows the government is not doing enough. Everyone’s had enough, and our politicians aren’t listening.”

“Everyone across the regions are concerned about the climate crisis”

The rebels were encouraged by the welcome they received. “It didn’t matter about people’s economic backgrounds, or how they voted. There was a communality across the regions. Everyone is concerned about the climate crisis”, said Dolly.

Abram said, “In the north-east people were more positive and receptive than I’d expected. The further north we went, the more receptive they were. They were against the government, which wasn’t working for them.”

The tour also helped to correct people’s negative opinions about XR tactics. “One person told us they’d read a story in the Daily Mail that we didn’t let ambulances through,” said Blythe on the Middle route. “I told them, that’s just simply not true. We don’t stop ambulances getting through when we’re doing occupations”.

As well as serious discussions, there were some lighter moments: in Teignmouth, rebels held an event with music and a sea pageant for a shoreside die-in, and a climate café; Derby had live music, while training people in outreach. In Calderdale, it was more of a family affair, with lots of engagement from young families, who joined the local group to do outreach and block printing.

At a stop in Taunton, rebels met up with Ashley, who had been attracted by the Samba band. He was “very concerned about the environment and apathy about it among people in general, and the government in particular”. He approved of what XR was doing.

Ashley said, “It’s really important for groups like this to stand up and keep things in people’s faces, so people, especially kids, are still asking questions.”

In Stroud, rebels met Saffron, a young mother, who was angry with the government which was “flailing” and “blaming us; at every single moment it’s our fault. How we can save energy by turning a little light switch off in the evenings. Rubbish, absolute rubbish”, she said.

Saffron said, “Despite everything, I know there are endless renewable resources all around us. I feel we’re just in a sort of low period where suddenly it’s going to start happening. I know it. I can feel it, I can see it”.

Rebels got down to business in Derby, Manchester, Bath, Leicester, Bristol, and Stroud, where they held Peoples’ Assemblies on ‘How we might respond to the crises were face together’.

Matilda said, “Citizens assemblies are really essential. I think without real, normal working people putting their foot down and watching the government and ensuring that they are actually doing what they’re supposed to be doing, which is taking care of us, nothing is going to happen.”

Rebels used different tactics to get people involved. In Chesterfield, they held stalls; in Exeter they marched from the local council office to speak at the University. In the West tour, they dropped a banner from a decommissioned oil rig.

Citizens’ surveys – a good way to get people involved

Citizens’ surveys proved very popular, with people lining up to participate, by putting stickers on graphs indicating how concerned they were about the climate and ecological crises, whether the government was doing enough, and whether they would participate in a Citizens’ Assembly. “The Board was very helpful in getting people involved”, said Abram, “and in showing how people had local concerns”.

People of all ages came up to find out what was happening. Grandfathers like Ashley, and young mothers like Saffron. Abram remembers in Consett speaking to a young woman with a one-year-old suffering from asthma because of the local pollution.

The tour was very successful in bringing XR’s concerns to the public. Abram found it very useful being able to explain to people what they were doing, and that “people found we were normal, just like them”. For Alex: “People were surprised to find we were real people, and shocked with how the media represented us”.

Blythe said, “We found you could have a chat and people’s opinions were flexible and not rigid. That was really positive”.

By holding Peoples’ Assemblies rebels showed how Citizens’ Assemblies worked, and found people were very responsive to the idea.

Finally, they were able to recruit 100s of people to the cause who would join in actions to fight climate and ecological crises in the future.