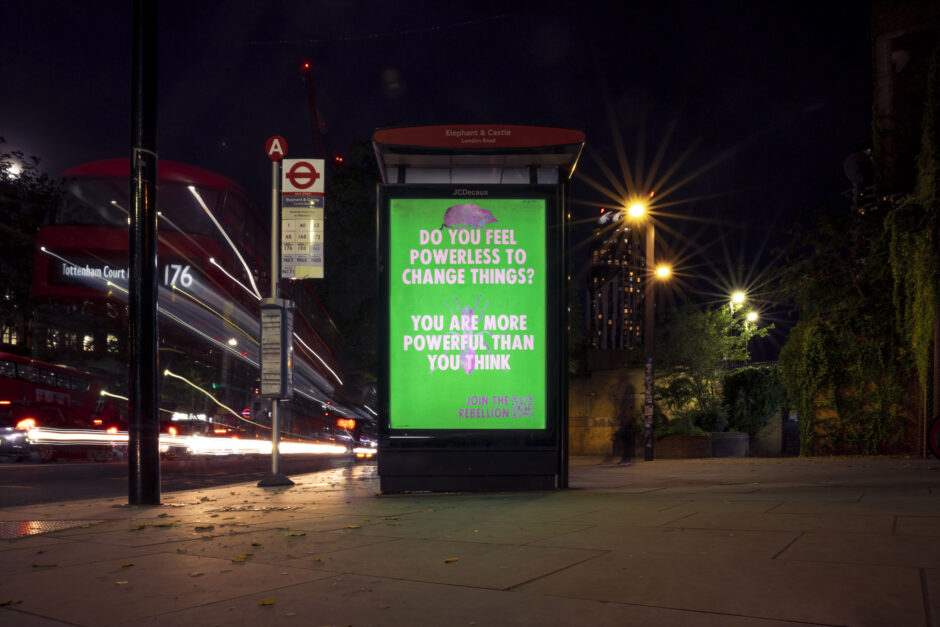 Extinction Rebellion ‘Cover the Capital’ and replace 10,000 adverts in London

On Saturday evening, hundreds of members of Extinction Rebellion replaced thousands of adverts around London, covering trains and bus stops with posters inviting the public to step up and demand government action on the climate and ecological emergency.

Protesters went onto the London underground, as well as opening up spaces in bus shelters and covering over billboards. Messages such as “You are more powerful than you think” and “This is a moment of truth” covered entire trains on multiple lines, simultaneously appearing across the capital overnight, and remaining for many days around the city.

Yaz Ashmawi, a physicist now full-time for Extinction Rebellion said, “We’ve worked with scientists to source the most important research to communicate, because we believe the public have a right to know that a million species are threatened with extinction, that coral reef ecosystems are lost in all warming scenarios, and that we have already adjusted the trajectory of the Earth system for 10,000 years or more.”

In boroughs all across London, protesters were trained and provided with the tools to replace adverts including guides and maps, then set off from 30 different springboard locations. In total 350 bus stops and 10,000 tube ads were replaced, and more will continue as weeks progress. Extinction Rebellion claims that this was the single largest ‘subvertising’ event in UK history.

Posters were designed by both members of Extinction Rebellion as well as prominent counter-cultural subvertising artists, such as Spelling Mistakes Cost Lives and Brandalism.

The cost of this mass subvertising action would be the equivalent of many thousands of pounds, making it a huge financial disruption to the advertising industry. Replaced ads included those promoting the use of fossil fuels such as airline, holiday and online shopping ads as well as recruitment for the metropolitan police.

Posters demanded Citizens’ Assemblies built up from everyday people to upgrade the political system in Parliament. Members of the public would be selected like a jury and invited to spend many weeks learning about the emergency and potential solutions, listening to fellow participants and reaching long-term, fair and sustainable decisions for the government to implement.

Protesters also engaged in conversations with the public, inviting them to sign up to be part of 100,000 people coming to Westminster on April 21st next year to demand the government to implement a citizen-led plan to address the climate and ecological emergency.

Tropical coral-dominated reef ecosystems will be non-existent at 1.2C and above:

1 in 4 species (1 million species) are threatened with extinction, many within decades: