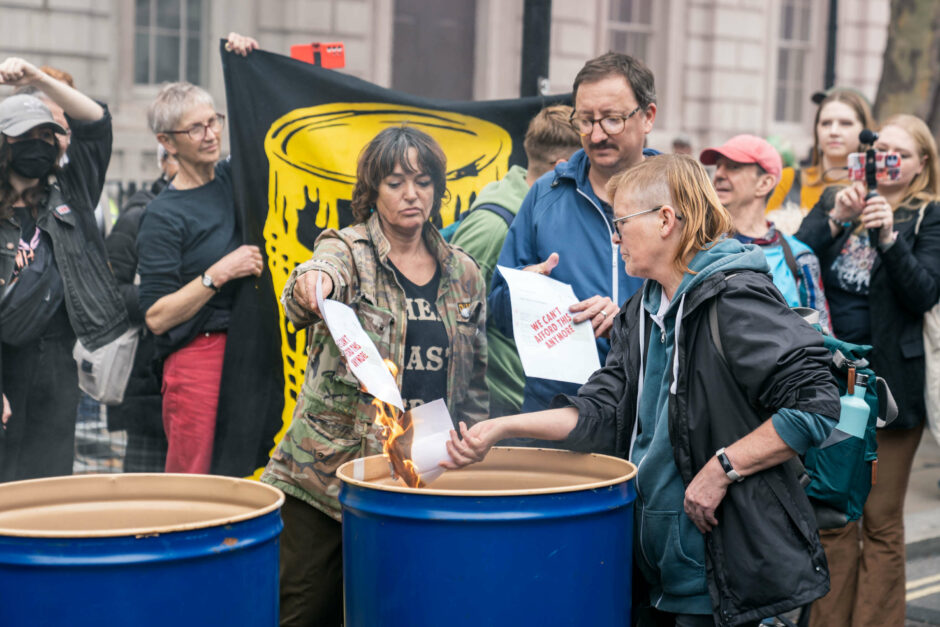 BREAKING: Energy bills burned outside Downing Street as Extinction Rebellion brings thousands onto the streets to say ‘We can’t afford this anymore’

At 2pm this afternoon, several people burnt household energy bills in giant ‘oil’ barrels at the entrance to No. 10 Downing Street. Thousands had gathered at Trafalgar Square at noon and marched to the home of the Prime Minister where they will block Whitehall until 6pm. People blocked the roads with banners that said ‘WE CAN’T AFFORD THIS ANYMORE’ and ‘ANTI GROWTH COALITION’ in reference to Liz Truss’s Conservative Party conference speech last week, as the Prime Minister herself gave an emergency press conference a short distance away.[1]

The act of resistance aims to highlight how the climate and cost of living crises intersect, and the fossil fuel industry’s influence on the new Prime Minister. As millions struggle to pay their bills, food prices soar and with black outs expected this winter, energy companies continue to make record profits, and the UK Government offers little relief to ordinary people facing a bleak winter.

The new government has made no secret of its fossil fuel connections, with Liz Truss – a former employee of Shell – making early pledges in her role as Prime Minister to open up the UK to fracking and escalate oil and gas extraction in the North Sea.[2] Extinction Rebellion opened the day of action today by delivering an award to the gates of Downing Street this morning that read ‘Shell Employee of the Month. 1996: Graduate Trainee, 2022: Fossil Fuel Prime Minister’.[3]

Clare Farrell from Extinction Rebellion said: “This much is clear, the UK Government does not care about us. Our political system has no intention of saving us. The government is far more concerned with cutting taxes for the richest and supporting the polluting companies that are destroying the planet than being in service to everyday people  through what’s bound to be a devastating winter.

Only the people of the UK who can truly hold politicians accountable. We’re mad as hell about the lack of democracy, we’re mad about the government betraying us. We’re determined to create a better world together and we will do it by building bridges, connections, relationships, networks. And we’ll be back in the Spring and there will be thousands of us. The only option left is for a mass mobilisation of people to come together to resist the ongoing injustice.”

With the arrival of the new government, the UK is seeing an intensified disregard for the climate and ecological crisis, with many describing the recent mini-budget as a ‘war on nature’ and new government policy suggesting a war on life itself. Just this week the new climate minister was quoted saying that fracking and oil drilling are “good for the environment”, with the HM Treasury announcing in the budget plans to tear up fundamental legal protections for our precious wildlife meaning nowhere in England is safe from development [4][5] Ministers are also planning to ban solar farms from most of England’s farmland in a “push for productivity”, with plans indicating a windfall tax on renewable energy.[6][7]

In her Conservative Party speech, the Prime Minister labelled Extinction Rebellion, rival political parties, unions, Remain campaigners among others, as a part of an ‘Anti-Growth’ coalition’, sparking mockery and bemusement from the public.

In an open letter to the Prime Minister Extinction Rebellion co-founder, Gail Bradbrook, said: “It doesn’t matter how attached your Government is, Ms. Truss, to a specific form of free market ideology. Physics and ecology are ultimately in charge and the life support systems of the earth are starting to tip. Doubling down on the extraction of fossil fuels commits our children and grandchildren here and globally to lives where food production fails and civilisation collapses. We charge that members of your Government, who are making decisions now, against the advice of scientists and international bodies, are committing crimes against humanity.

“People will become increasingly desperate in this country as the consequences of years of terrible choices come home and impact us all. Choices to sell off our assets, to poison our food, air and water; while at the same time we failed to invest in homegrown renewables and insulate homes. We are left with little security and a cost of living scandal. Over 20,000 people in the UK already died unnecessarily this year since April. Those with the least responsibility for these crises are suffering in the millions, battered and uprooted by climate disasters, from the Horn of Africa, to Bangladesh, to Mozambique, to Pakistan.”

Extinction Rebellion’s Weekend of Resistance will commence from October 14-16 in central London. Thousands have come together in London for today’s mass participation action, an open house event at the Tate Modern on Saturday, which will see talks and performances from She Drew the Gun, Peter Jukes, Kate Raworth and Lily Cole, followed by a mass subvertising campaign and a youth-led march on Sunday 16th. Extinction Rebellion is working on a plan that sees the movement growing in numbers and building momentum towards 100k people on the streets in Spring 2023. October 14-16 will be the next step in that journey. Find out more here.

Gail Bradbrook continued: “We see the callousness and the corruption and the refusal to face reality. Those of us who have the capacity and the conscience will do all we can to stop this death machine. There are a growing number of people who just can’t pay the bills that are mounting and others who won’t work for poverty wages, unable to make ends meet despite their hard work (though I understand you, Liz Truss, think British workers “need more graft”). We will strike bill payments in solidarity and strength, and we will not let you frack the British countryside, poison the water and the people.

“Yes, we are uniting, because we believe in our shared humanity, we love our country, and this Earth, and we are willing to take responsibility, whether that comes at a cost to us, on behalf of our collective wellbeing.” [8]