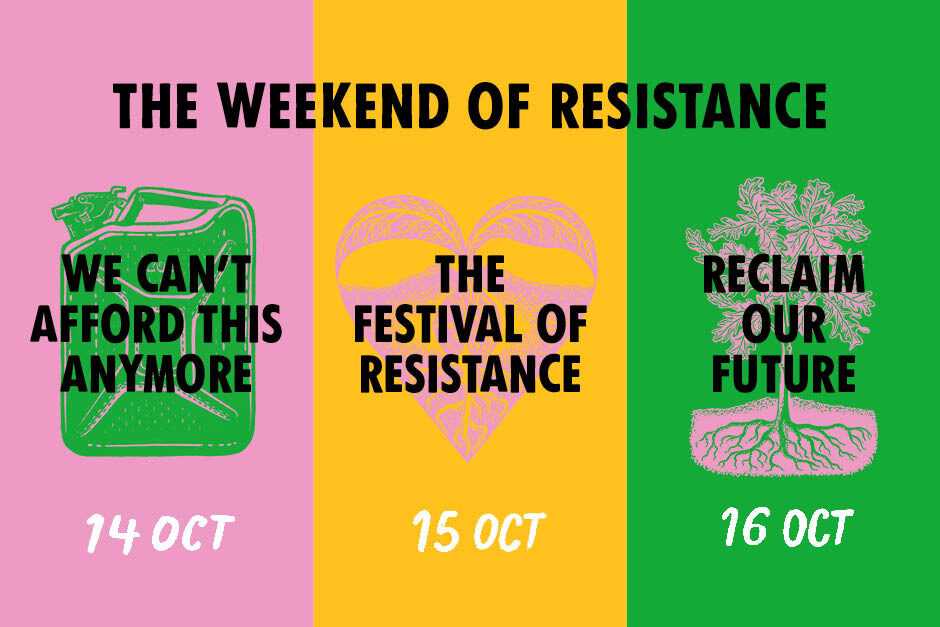 WE CAN’T AFFORD THIS ANYMORE: Extinction Rebellion to hold weekend of resistance in London on October 14-16

Extinction Rebellion’s Weekend of Resistance will commence from October 14-16 in central London. Thousands will come together in London for a long weekend of mass participation action, an open house event at the Tate Modern, a mass subvertising campaign and more. Extinction Rebellion is working on a plan that sees the movement growing in numbers and building momentum towards 100k people on the streets in Spring 2023. October 14-16 will be the next step in that journey.

As October turns into a month of mass disruption from a cross section of movements, unions, anti austerity campaigners, environmental protestors and racial justice movements are aligning to resist the unjust policies of the new government. Extinction Rebellion plans to take action this month to highlight how cost of living and the climate crisis intersect and show why the UK’s out of touch and out of date politics is responsible for both. Because the climate crisis and the crisis in our society are two parts of the same story, a story where the majority of people are forced to pay for crises not of our making, while a tiny minority profit from our struggle.

Sarah Matthews from Extinction Rebellion said, “The trajectory we’re on in the UK is a frightening one, with a new Prime Minister proud of her connections to the oil industry and policy now being written directly from Tufton Street lobbyists, but at least we are now able to see the corruption and lobbying influence in plain sight. This government isn’t hiding it and the people of the UK are showing they aren’t going to put up with it. It is clearer than ever that despite our differences, organisations, movements and individuals are recognising the necessity to unite and say enough’s enough, we can’t afford this anymore.”

OCTOBER 14: The action begins at midday on Friday October 14th at Trafalgar Square. From there we will march to Downing Street, blocking Whitehall until 6pm with speakers and a mass sit in to hold the space. People are encouraged to bring their energy bills with them.

OCTOBER 15: On Saturday 15th October, from 11am – 5pm, Extinction Rebellion is hosting an open house event on the Tate Modern Lawn, Bankside. This family-friendly event with food, art, music and poetry has been created to showcase some of the best ways to work together to build a better tomorrow.

As well as being a fun and informative day out for the family, this event allows people to engage with Extinction Rebellion directly and to hear from a range of other grassroots movements, to find out more about the climate crisis and share ideas with like-minded people.

Louisa Roach of She Drew The Gun, said: “F*ck the war on terror and the war on drugs, we need a war on forest fires and a war on floods, a war on unnecessary plastic goods and the parasitic vampires sucking our blood. Because I’m sick of the media, politicians and all the power of the state existing in service of corporate power so that a wealthy elite can systematically destroy our living environment for profit.

“The only power we’ve got is to get together and act politically as a community, to rage and resist. Class consciousness and resisterhood, that’s what I’ll be singing about and I’m looking forward to hearing from everyone else at the festival.”

On Saturday evening as the programme comes to a close, we are inviting people to head out en masse into central London for an evening of subvertising where hundreds of bus stop ads and thousands of tube ads will be replaced all over the city, spreading information about the climate crisis and a positive vision for the future. Find out more here.

OCTOBER 16: On the Sunday, we invite everyone to join us at the Reformer’s Tree in Hyde Park at 11am for a youth led march to Parliament Square. We will carry an oak sapling, a descendant of the 600 year old Kett’s Oak tree in Norfolk. This tree served as the meeting hub for Kett’s Rebellion in 1549, when 16000 civilians rose up against the ruling classes.

During the Weekend of Resistance, the sapling will provide a focus for us to reflect on and share our vision for a future of justice, transformation and equality.

October has seen the launch of Extinction Rebellion’s mobilisation mission to bring 100k people onto the streets on April 21st 2023. Integrated with our methodical mobilisation campaign, Project 3.5, we will pledge to sign up 100k people by Spring 2023 to come back to London for major nonviolent civil resistance to win on our demands. More to come.