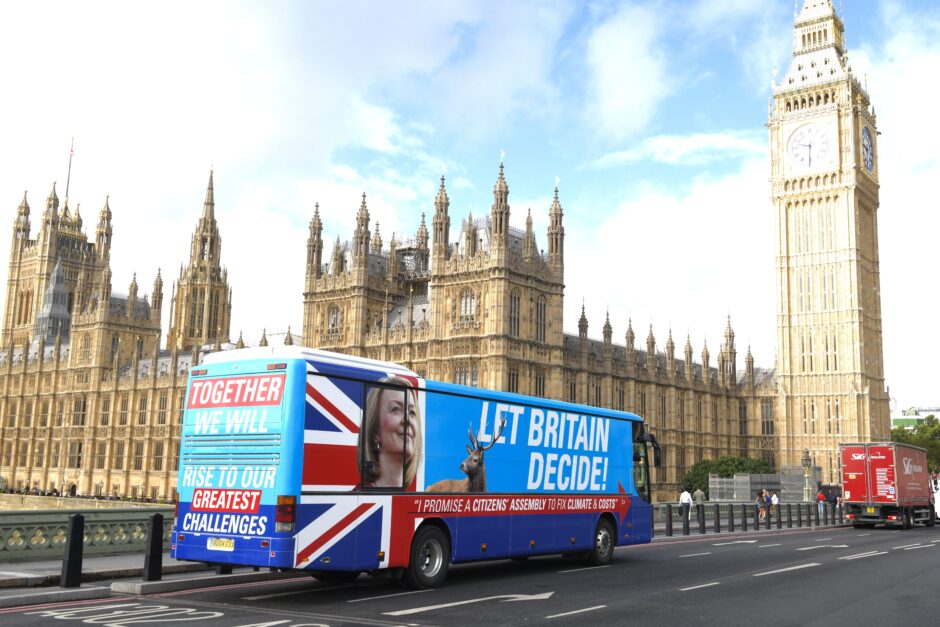 Today a campaign bus with the words ‘LET BRITAIN DECIDE: I promise a Citizens’ Assembly on Climate & Costs’ toured around iconic locations in Westminster to launch a new campaign for the new Prime Minister, Liz Truss. On the day of the new PM’s first Prime Minister’s Question Time, the ‘Truss Bus’ stopped at Downing Street, Buckingham Palace, posed with the statue of Churchill, and did several laps of Parliament Square, before the MET police pulled the bus over on Victoria Street and held it for the duration of the Parliamentary session.

The bus is of course not a real campaign bus for the new PM. It is a hoax bus from Extinction Rebellion, launched as part of the September Rebellion, starting at Marble Arch on Saturday September 10th, 10am. [1] After holding the bus for nearly 4 hours, the police gave the driver a ticket for an “unsafe carpet” on the stairwell before letting them continue on their tour. Dare we say that it looks a bit like Liz Truss is scared of a bus with better ideas on it than her own!

Take a moment to imagine what it would be like if this was the commitment of our new PM. If you really could write something on a bus and it would come true.

Our political systems are out of date and can’t cope with the crises we face, focused on divisive debates rather than coming together to solve real problems. It is clear that the collective intelligence and common sense of ordinary people can help us to face the real world far better than our lobbied, biased, corrupt politicians. So we wanted to help you to imagine that.

Extinction Rebellion has always been willing to stake our faith in the integrity of everyday people over politicians and the benefits of sitting around a table over shouting across a room.

And now the situation is urgent. Just a week ago a third of Pakistan was under water. In the UK we just experienced 40 degree heat for the first time ever. This summer wildfires became a part of British summers. We will feel the effects of drought for months to come with up to 50% crop failures predicted in the UK. [2] At the same time we’re sinking deeper into a cost of living crisis of historic proportions, all the while oil and gas companies rake in billions of pounds in record breaking profits. [3]

Our government departments and military are preparing for a largely uninhabitable earth, with 3 to 4 degrees of warming within the lifetimes of children who are born now. [4] Whilst Liz Truss spent the days and weeks in the run up to being appointed as Prime Minister promising to increase domestic oil and gas production and lift bans on fracking. Now fracking companies have announced plans to offer people threatened with crippling energy bills a 25% discount if they agree to back fracking in their local area. It’s like living in a horror film where nothing makes sense, and MPs who flirt with climate denial are put into key positions in the new cabinet. [5]

The Liz Truss Bus was designed to show that there are ways to change the current course of inevitable failure and breakdown. It’s worth noting that at this point:

The international community agrees – A Pew Research Centre survey published this week found that the UK is among nineteen countries where 3 out of 4 people view global climate change as a major threat. [7]

The UK courts agree with XR UK – in July this year the high court ruled that the UK Government’s pathway to net zero is unlawful because it is so vague it isn’t possible to hold them to account on it. [8]

Politics in the UK has become a parody of democracy where the people running the country pay lip service to the basic needs of ordinary people for food, water, a warm place to sleep, healthcare, education and a planet they can live on, while helping their friends get rich. Truss may be floating plans for an energy price cap but she looks set to do it by handing over £130 billion of public money, leaving the big energy companies to enjoy their profits. [9]

The situation is urgent and that means it’s time to slow down and listen to each other. We’ve seen where politics based on a divisive shouting match in Westminster has gotten us. We need democratic processes which are capable of handling the level of crises we now face. We need an independent democratic process by which ordinary people sit around the table, learn, listen and overcome their differences to make the decisions we so badly need on the climate crisis and the cost of living crisis.

The Liz Truss Bus may have been a performance but the idea is a serious one. Since Extinction Rebellion was born in 2018 a call for more democracy (we are definitely headed for less at the present time) has been one of our three demands. What would the UK look like today if a group of ordinary people, selected to reflect the full diversity of the population and informed by experts, called the shots on the climate crisis and the cost of living crisis? What decisions would that group of around 100 people come to, given the time to learn and deliberate?