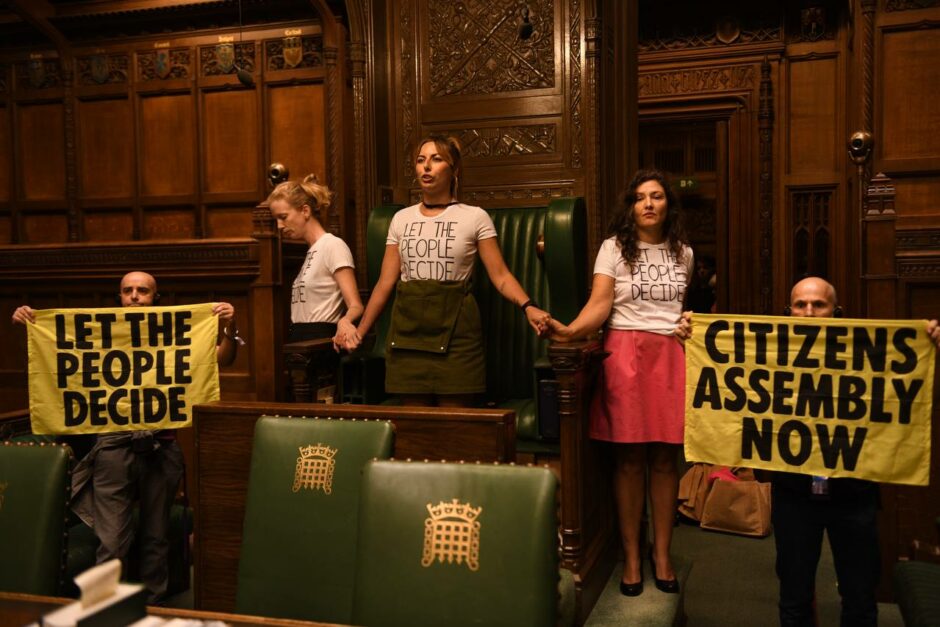 ‘We can’t afford this anymore’: Extinction Rebellion takes action inside Parliament to demand a Citizens’ Assembly

Just before noon on September 2nd, a group of around fifty people took nonviolent action at the House of Commons to kick off the first phase of Extinction Rebellion’s September plans. The Parliament action began with four people, who had booked on an official tour of the building, gluing themselves in a chain around the Speaker’s Chair inside the Parliamentary Chamber. They took it in turns to read a speech, pointing to the need for a Citizens’ Assembly to cut through the corruption deep in the heart of Westminster. They wore t-shirts that read ‘Let The People Decide’.

Behind the Speaker’s Chair in the great hall, two people held two large banners that read ‘Citizens’ Assemblies Now’ and ‘Let The People Decide’. Outside of the building, a member of Extinction Rebellion climbed up the scaffolding around Big Ben and held another giant banner that read ‘Let The People Decide- Citizens’ Assemblies Now”, while two others chained themselves to the railings.

Everyone inside the building had entered legally via an official tourist booking.

The speech read out in the chamber said: “We are in crisis. And what goes on in this chamber every day makes a joke out of us all. We can not afford to carry on like this.

“It is possible to act on climate and costs in a way that is fair and supports everyone. But our political system is too out of date and out of touch to see beyond the next election cycle and do what needs to be done. We need a new way of making decisions, where more voices are heard, not just those at the top. We need the true diversity of the country to be represented.

With a new Prime Minister to be chosen next week by a fraction of the country, and the UK suffering from a cost of living scandal meaning millions won’t be able to pay their bills this winter, faith in politics is at an all time low. There is an urgent need to upgrade our political system to allow more representation and give ordinary people a say over the major crises facing us.

In July this year the high court ruled that the UK Government’s pathway to net zero is unlawful because it is so lacking in detail it’s not even possible to hold them to account on it. [1] Recent polling by Ipsos found that eight out of ten people in the UK are concerned about the climate crisis and over 52% percent think the government’s plan to get net zero by 2050 is too late, that’s around 35 million people who think the government’s plan isn’t good enough. [2] Yet both candidates for PM have said they plan to increase production of new fossil fuels. [3] [4]

Our current politics is too focused on the short termism of the election cycle to tackle the major issues of today, like widespread inequality and the climate and ecological emergency. A citizens’ assembly on climate and costs would break the deadlock on Westminster corruption, allow more people to be represented, and restore trust in politics.

Alanna Byrne of Extinction Rebellion, said: “It is possible to change things and update politics so it really represents ordinary people. Independent citizens’ assemblies can show that those blocking progress in Westminster have no democratic mandate to continue destroying the environment and give power back to people. Selected like a jury and supported with independent, expert knowledge, this is true democracy that reflects the diversity of the population.

“But to create a new, fairer politics will require first thousands, then millions of us. It will require sustained culture-shifting civil disobedience, until we become impossible to ignore. Then, when there’s enough of us, positive change will become inevitable.”

The action today is the opening act for Extinction Rebellion’s September plans, which itself will act as a launch event for a 5 phase plan to bring 100k people onto the streets in civil resistance next Spring. This exciting new plan will centre people power at its core, because Extinction Rebellion’s mission is to build a movement that is impossible to ignore. [3]

September will boost energy and build momentum as a first step in a laser focused, strategic plan that sees Extinction Rebellion growing in numbers and building momentum towards Spring  2023. Politics as usual will do anything to avoid facing up to the reality of the climate and ecological crisis, so without large numbers out on the streets our demands will be ignored. We believe now more than ever as cost of living leaves people desperate, and strike action for better pay is demonised, that a mass movement of 3.5% of the population is needed to bring about radical change. In order to achieve that there’s an urgent need for a mature plan that people can believe in, a plan which maps out precisely how we can win between now and next Spring.

Extinction Rebellion has worked on a roadmap to success and it begins with fierce mobilisation and connecting with communities across the UK. After the September weekend, we will tour the country to hold People’s Assemblies to capture the true voice of the country and find out the biggest concerns people are facing, and how we can tackle them together. This will be followed by mass disruptive action together with other groups, for maximum impact on October 14th, focusing our outrage at the cost of living scandal into solidarity action.

Following this, Extinction Rebellion will be focused primarily on growing the movement and targeting all of our energy in April 2023.

The plan will be in 5 phases:

PHASE 1: A curtain raiser action prior to the 10th and mass London and UK – wide Paint the Streets on the evening of Friday 9th Sept!

PHASE 4: On the 14th October we invite everyone to come back to Westminster, London, for disruptive nonviolent civil disobedience to join forces with other groups organising around the cost of living scandal.

PHASE 5: THE BIG ONE – This will centre major government disruption over a prolonged period until the government agrees to empower an independent Citizens’ Assembly on climate and ecological justice.

Integrated with our methodical mobilisation campaign, Project 3.5, we will pledge to sign up 100k people by Spring 2023 to come back to London for major nonviolent civil resistance to win on our demands.