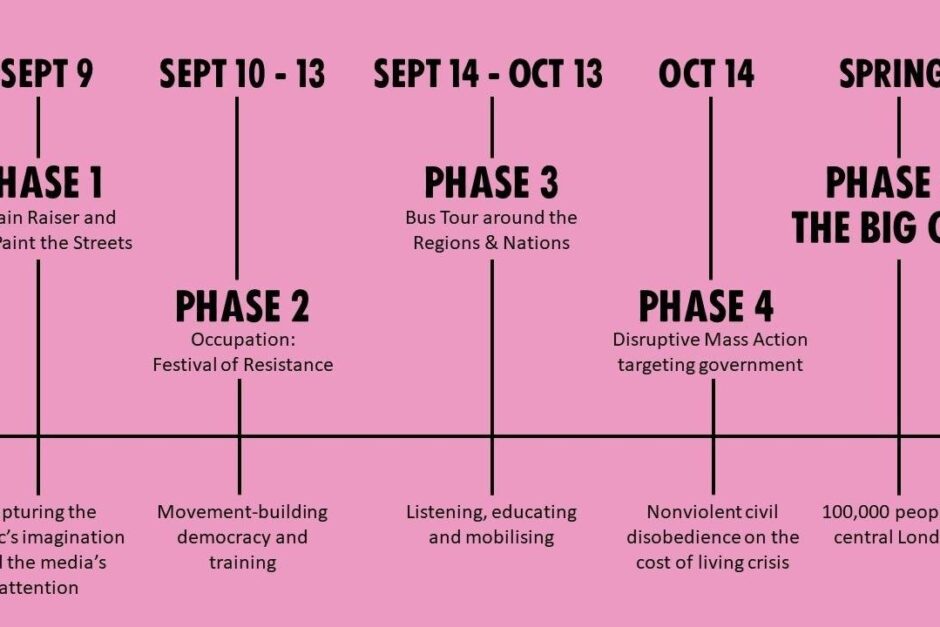 In May this year, following the April Rebellion, the XR UK Strategy Team set four objectives for our work – to research and develop the strategic approach of XR UK Rebellions, to begin to build processes of genuine dialogue within XR UK on issues of justice, to improve our movement strength and structure and to ‘expand the audience’, reaching and mobilising a broader range of people.

You can find a more detailed breakdown of these objectives here.

Below is an update on our progress so far, ahead of releasing a more comprehensive strategy document later this year.

The project arose from a clear need and desire in our movement to engage with the topic of climate justice and aims to deepen our ability to hold productive conversations around complex topics, in a way that we can replicate across the movement, and model in our communities. The work to foster dialogue, understanding and empathy is becoming increasingly important as we move further into collapse.

The dialogues investigate the topic of climate justice, and also explore processes that help us to learn well together and connect with each other. The time spent relating to each other is the most important aspect of this work: what emerges between us is the way we learn.

The initial sessions were supported by a facilitator from the Global Assembly. A Peruvian woman, from outside XR, who has extensive experience in this field.

As part of the movement strength and structure strand of our work, the strategy team is holding conversations with the Fundraising and Media and Messaging teams to develop a plan for financial resilience and movement growth.

XR UK faces potential pitfalls in relation to how we fund our movement. Becoming highly financially dependent on big foundations and donors leaves social movements vulnerable to shaping their work to fit what these institutions or individuals are willing to fund.

To protect XR UK’s ability to act with integrity and avoid becoming bound by financial considerations (otherwise known as NGOification) we need to grow the base of ordinary people taking action with and donating to XR.

Small donations of under £50 have always been a core part of our income and they primarily come in response to fundraising emails. The XR UK mailing list has around 190,000 subscribers but for a movement with our name recognition it should be much larger.

The strategy team is focussing skills and resources towards growing our mailing list. This will allow the movement to mobilise more people to take action and to be increasingly financially self sufficient.

The strategy team has worked with Project 3.5 and the Rebellion Planning Team to develop a timeline for the movement running from Rebellion plans this autumn through to spring 2023. Over the next eight months we will work to build towards a win on our demand for an immediate end to all new fossil fuels. It is strategic priority to stop the harm as the first response which paves the way for the work that must follow to adapt, mitigate and build resilience together.

The immediate demand provides an opportunity for cross movement collaboration as the environmental space coalesces around the need to halt the development of new fossil fuels and the new movements emerging in response to the cost of living crisis provide opportunities to make links between the climate and ecological crisis, our broken political system and huge profits in the fossil fuel industry.

Working with what Project 3.5 has learnt from over nine thousand conversations with members of the public across the UK, we’re developing a movement wide campaign set to officially launch in January 2023. The campaign will form a framework for other movements and groups to join together, lowering the barrier to entry for people who are hesitant about XR but terrified about the crises unfolding around us and looking for how they can make real change.

In 2018 Extinction Rebellion was the new kid on the block, we’re now a household name and carry responsibility for the mass participation civil disobedience space in the environmental movement. With that responsibility comes a duty to continue to set our mission on what is necessary and to lower the barrier to entry to all those millions of people in the UK who know something needs to change. Polling by Ipsos in August found that 8 out of 10 people in the UK are concerned about the climate crisis and over 52% think the Government’s plan to reach net zero by 2050 is too late. So that’s around 35 million people in the UK who are concerned and know the Government’s plan isn’t good enough.

We’ve set the target of bringing 100,000 people out onto the streets of London in Spring 2023. It’s more people than we have ever mobilised and to get there it’s going to mean communicating a clear plan which people can see will work, as well as building alliances with other movements and groups. We’re working to generate a ‘here comes everybody’ moment which will activate thousands of people who felt the heat in July and are watching the devastation unfold in Pakistan.

And we know that people are responding to seeing the crises unfold around them. Numbers at Welcome to XR sessions are up, 500 people came to the Open Call on the 14th of August and our crowdfunder raised £50k in under 24 hours when we launched it last month.

Come to Marble Arch at 10am on September 10th to hear more about the plan and take the first steps in building towards THE BIG ONE in spring next year!