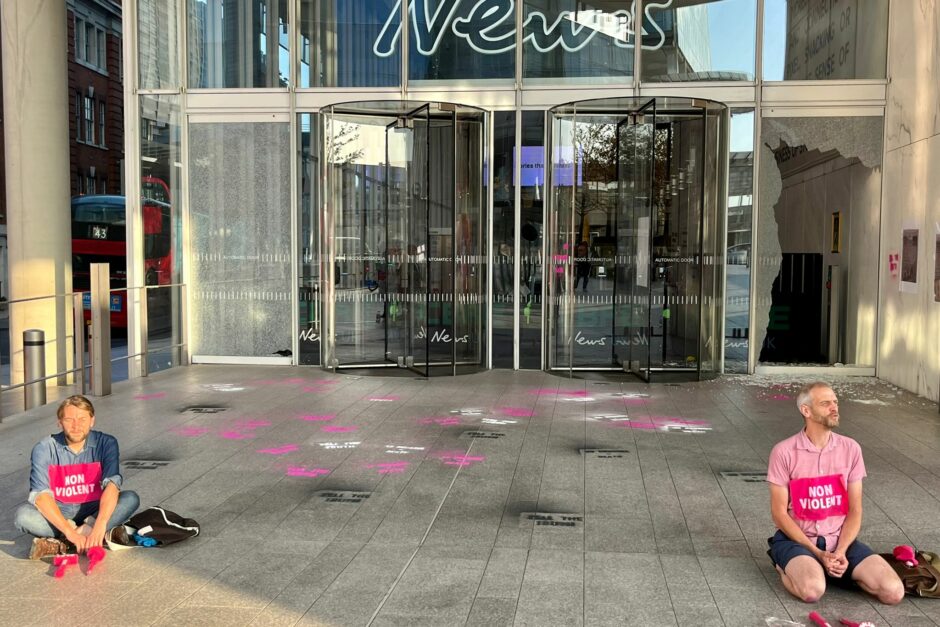 At 6:30am this morning, 2 people from Extinction Rebellion carefully cracked 2 windows at the entrance of the News UK building at London Bridge. At the same time, 4 others – including a scientist – chalk sprayed “TELL THE TRUTH” and “40 DEGREES = DEATH” on the front of the building, and pasted recent copies of The Sun headlines about the heatwave onto windows. Special care was taken to ensure no one was hurt when the windows were cracked. The action comes just two days after six healthcare professionals, including two GPs, were arrested for breaking windows at JP Morgan’s Canary Wharf HQ.

This act of nonviolent civil disobedience comes as a response to the media’s coverage of the current heatwave. On Saturday, the British Government declared the nation’s first ever level 4 national emergency heat red alert.[1] As temperatures reached almost 40 degrees across parts of the UK yesterday, and are predicted to pass 40 degrees for the first time today, sections of the media are downplaying the severity of the heatwave, with headlines such as “It’s not the end of the world! Just stay cool and carry on” and “Leaps of fun” splashed across front pages.[2] Instead of warning readers of the increased risks from such heatwaves as the climate crisis intensifies,[3] The Sun chose to cover their front pages in images of women in bikinis, beach goers and happy toddlers with ice creams.

Steve Tooze, member of XR and former journalist at the Sun and Daily Mail, said: “These newspapers have spent 30 life-or-death years denying or ignoring the climate crisis to ensure that Business As Usual keeps the money flowing into their already obscenely-bloated bank accounts. As a result, millions of us still have no clue about the terrifying dangers that threaten us.

“Newspapers that treat a deadly heat wave as an invitation to a fun day on the beach and use it to advance their puerile and divisive culture war nonsense are not newspapers at all. They are propaganda sheets for two very rich and evil men. We are no longer prepared to sit at home feeling angry and despairing at the lies and disinformation.”

Dr Jenna Lawson, research associate in biodiversity and sustainability at Imperial College London, says: “Scientists agree almost unanimously that climate change is human induced and we have shown that fossil fuels are by far the biggest contributor to global climate change, accounting for over 75 percent of global greenhouse gas emissions and nearly 90 per cent of all carbon dioxide emissions. Yet the media continually fails to convey the urgency of the climate and biodiversity crisis.

“This week, whilst they have covered the heatwave currently gripping the UK and indeed many parts of Europe, they have underreported the links to climate change and failed to link this to fossil fuel use. Meanwhile in the background last week there were suggestions within the UK government to scrap net zero targets and the government continues to invest in new oil and coal. It is absolute madness to witness the devastating effects of climate change and continue to make fossil fuel investments and attempt to reduce our commitments to tackle what is the greatest threat the world has ever faced. It is the job of the media to bring forward these issues into the public domain, something which they continually fail at.”

News UK is owned by Rupert Murdoch, whose media empire spans three continents. Murdoch has vast political power which he uses to undermine our democratic system: every winning prime ministerial candidate since Margaret Thatcher came to power in 1979 was backed by his media empire.[4] Murdoch is a known climate denier, and the Sun has continued to lobby for the expansion of the fossil fuel and aviation industries. He has been criticised by his own son for his businesses’ “ongoing denial” of the climate crisis.[5]

Caspar Hughes, one of the protesters, said: “We are being betrayed by our press. My son is 15 years old, which means he’s facing possible societal collapse by the time he reaches his thirties. He and I will live and die in a world where famine will be measured in billions, war, disease and extreme weather will be far more common place.

“The biggest issue stopping government, business and civil society from responding sensibly to the climate and ecological crises is the billionaire owned media. If Murdoch, Rothermere and Dacre supported Net Zero Policy the rest of us would follow suit.

“Currently they are key destroyers of what little hope we have left to secure a safe, secure future for ourselves and our children. It is long past time for them to bring their power to bear as we try to stop our civilisation from collapsing in the coming decades.”

As record heatwaves blaze across Europe, and the UK awaits a new Prime Minister, any hope for rapid climate action is all but collapsing. The commitment from candidates in the Conservative leadership race has been minimal and the conversation from the current cabinet around the heatwave has undermined its severity, with Deputy Prime Minister telling everyone to “enjoy the sunshine” this week.[6] It was just revealed yesterday that the high court has ordered the government to outline exactly how its net zero policies will achieve emissions targets, after a legal challenge from environmental groups.[7] The mainstream media has a responsibility to guide the conversation about the risks we face from climate breakdown and tell the truth about the true causes of the current heatwave.

The action comes just two days after 6 health professionals broke windows in Canary Wharf. The group from Doctors for XR included two GPs, a child and adolescent mental health specialist, a gynaecologist, a consultant psychiatrist and a dementia nurse. They were held in police custody after carefully cracking eight panes of glass at financial services giant and investment bank JP Morgan’s offices at 10 am on Sunday July 17th.

Two years ago, Extinction Rebellion made headlines across the country after blocking printing presses in Broxbourne, North London and Liverpool, stopping the delivery of many of the UK’s biggest papers for a day – including the Times, the Telegraph and the Sun.[8] A year later, thousands marched on News UK at London Bridge, to continue to putting pressure on the Murdoch empire to tell the truth about the climate and ecological emergency.

A year on, and the majority of the mainstream media are still not connecting the dots between extreme weather and climate change, and warning of the root of the problem – the fossil fuel economy and increased investment in fossil fuel infrastructure.

Extinction Rebellion will be taking to the streets en masse from September 10th in London.[9]