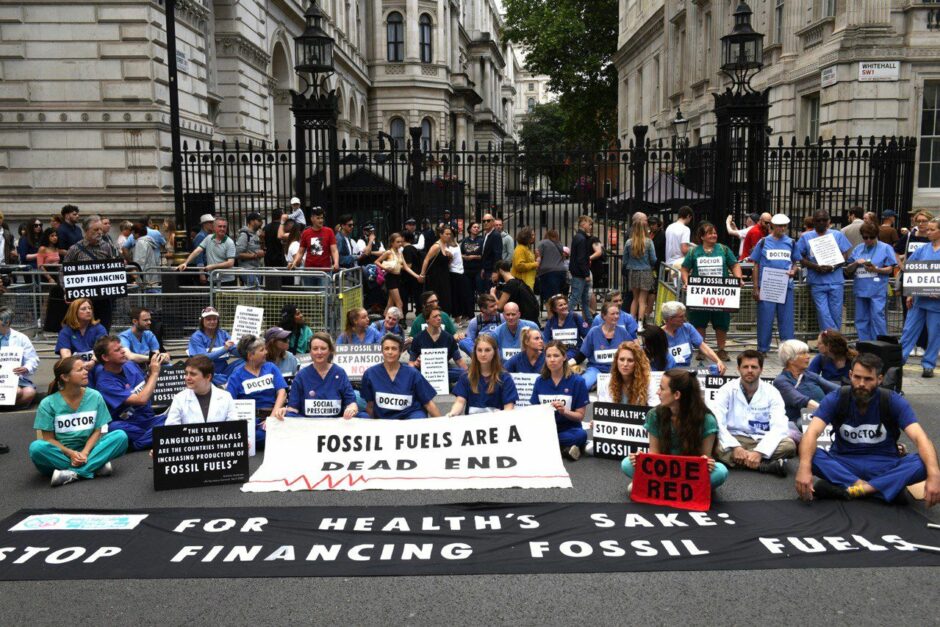 At 2.30pm today, 60 health professionals sat down in front of the gates outside Downing Street. Some members performed an unsuccessful ‘resuscitation’ of a 4 foot Earth on a stretcher. Following this 10 health professionals remained in front of the gates and ‘glued on’, whilst their colleagues held banners saying ‘For Health’s Sake Stop Financing Fossil Fuels’ and ‘Fossil Fuels are a Dead End’. This protest comes as a response to the government’s approval of the new controversial Jackdaw gas field, and the Treasury’s creation of a deliberate loophole in the Windfall Tax which encourages more drilling for North Sea oil and gas.

The health professionals, organised by Doctors for XR, Medact and Health for a Green New Deal, delivered a letter for the attention of Boris Johnson1 which includes recent government guidance for all health professionals. This guidance2 states that the UK is “particularly at risk of drought, flooding and extreme weather events, all of which threaten the water, food, infrastructure and supply systems we depend on.” It says that “Health and care professionals should recognise the climate crisis as a health crisis, and therefore climate action as a core part of their professional responsibilities.”

Despite this, the government has consistently ignored calls from the health community to stop funding and approving health damaging fossil fuels. Letters were sent to the government in October 20213 and February 20224,5 by signatories including the British Medical Association, Royal College of Physicians, Royal College of Surgeons and the Royal College of Nursing, both requesting an end to new fossil fuel licenses and subsidies. On World Health Day, April 7th 2022, Doctors for Extinction Rebellion protested outside the Treasury to escalate this message,6 but HM Treasury’s response was considered insufficient.7

The government has ignored all these warnings from the UK’s most senior health professionals by approving the new Jackdaw gas field. This will not lead to lower energy bills,  and while doing next to nothing for UK energy security, it will produce the equivalent of more than half of Scotland’s annual emissions, or Ghana’s entire annual emissions. 8

The government has also continued fossil fuel subsidies and financing. Last week it introduced a deliberate loophole in the windfall tax, which means that whatever a company spends opening up a new North Sea field, almost as much will be discounted from their windfall tax bill. This is designed to encourage more North Sea oil and gas production, and means that Shell will pay £210 million less in windfall tax as a result of its investment in Jackdaw, despite recording profits of over £14 billion in 2021. As a result of this shortfall, the public purse will now have to cover the recently announced £400 energy bill discount for half a million UK households. 9

The health professionals are supported in person by Scientists For Extinction Rebellion, who recently blocked the Business, Energy and Industrial Strategy department, calling for an end to new fossil fuels10.

Dr Fiona Godlee, former Editor of the British Medical Journal (BMJ) spoke at the demonstration, saying: “The government has twice ignored the medical profession’s pleas to stop propping up the toxic fossil fuel industry with taxpayers money, so they leave us no choice. Our political leaders are neglecting their duty of care to the young people of this country whose futures are now at risk, so we as health professionals feel morally obliged to protest on their behalf.”

Dr. Asmamaw Sisay Yigeremu, a Family Practitioner attending the demo, said “The Global south is already suffering from the effects of the climate crisis  with repeated droughts and famines. Hundreds of thousands have died, more die everyday, millions are already displaced. A recent report from Save the Children and Oxfam estimates that one person is being killed every 48 seconds by unprecedented droughts in East Africa. (6) All of this is happening to those least responsible for causing this crisis, whilst high emitters like the UK are continuing to approve new fossil fuels. We cannot stand by and let this happen.”

Rhiannon Osborne, a medical student and Medact spokesperson , said “Right now the key question on the public’s mind is, ‘Can we trust our politicians?’. On the evidence of their recent support of the fossil fuel industry, through the gigantic get-out clauses in the so-called windfall tax and the licensing of the Jackdaw oilfield – no we can’t. It’s time that the government puts people over profit for the sake of public health. We need a just transition, not new fossil fuels.”

Maggie Fay, a Dementia Specialist Nurse, also glued to the floor, said “I am a dementia specialist nurse here today because my code of conduct states that I must “act without delay if you believe that there is a risk to patient safety or public protection “. I believe that the UK government , by granting licenses to further fossil fuel extraction, such as the Cambo and Jackdaw oil fields, is acting in a way that will cause harm to the public.”

Jackdaw is a relatively minor gas field and will not prevent the UK from needing to import gas. Its output will only meet around 1- 2% of UK gas demand on average over its lifetime. It would start producing gas in 2025 and production would drop by almost 60% within four years of its peak in 2026. Jackdaw’s gas reserves are also particularly polluting, with an unusually high CO2 content. Shell’s application to extract gas from Jackdaw was originally rejected by the regulator, OPRED, due to what it described as the “significant effect” it would have on the climate. OPRED has now attached conditions to Shell’s approved plans to mitigate its climate impact. However, it may still mean that Shell’s plans for Jackdaw do not align with the targets and objectives of the UK’s Carbon Budgets nor the industry’s decarbonisation commitments in the North Sea Transition Deal.

In February 2022, the President of the Royal College of Physicians commented5: “’It seems utterly wrong that at a time when the role of fossil fuels in climate change is better understood than ever, that anyone should think that drilling for oil is a good thing. The climate change we are witnessing is on a scale that is already harming health and will only get worse. Any short term profits will soon be forgotten by everyone living with the consequences.”