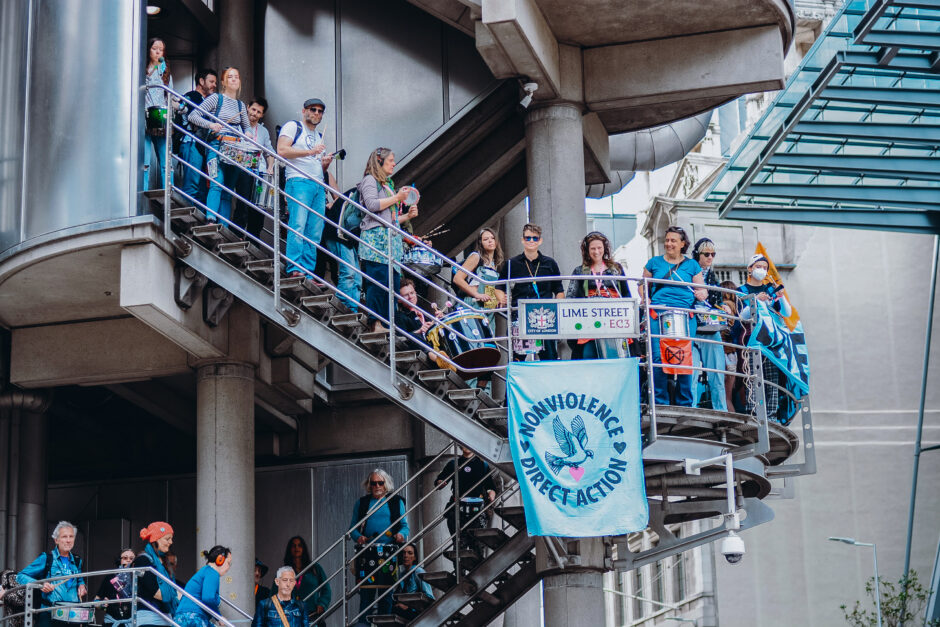 On the 12th April 2022, more than 60 people from Extinction Rebellion blocked the entrances at Lloyd’s of London headquarters (1 Lyme St, London, UK), preventing staff from entering the building. The action led to the closure of the London based insurance and reinsurance giant for the day. Extinction Rebellion is demanding that Lloyd’s of London stop insuring fossil fuels projects, and highlighted the Trans Mountain Pipeline extension in Canada, which they believe is being insured through the Lloyd’s marketplace.[1]

At the time of the action 16 insurers had cut ties with the project after public pressure. [2]  In the month since then it’s been announced that two insurers Aspen Insurance and Arch Insurance, both of which operate inside the Lloyd’s marketplace, have committed not to renew their insurance of the Trans Mountain Pipeline. [3] [4]

Andy Smith, 46, Self Employed, from Extinction Rebellion who took part in the protest that shutdown Lloyd’s of London, said: “The fact that two insurers have pulled out of the Trans Mountain Pipeline since our action shows that non-violet direct action works. I was inspired by the strength and courage of indigenous land defenders in Canada who have led this struggle and been putting their bodies on the line to stop this project’s construction. These victories wouldn’t have happened without their bravery. The strength of our movement when we act together is unstoppable.”

The Trans Mountain Pipeline in Canada has been fiercely opposed by Indigenous communities whose land it cuts through, and would allow a dramatic increase in the amount of tar sands Canada could export, shipping 590,000 barrels per day of tar sands crude. [5]

“By confirming that they are dropping Trans Mountain, Aspen is joining insurance industry leaders in recognizing that fossil fuel infrastructure projects that don’t have Free Prior and Informed Consent are a material risk. It’s time for the rest of the Lloyd’s syndicates and the whole insurance sector to follow suit before the climate crisis gets worse,” said Charlene Aleck of the Tsleil-Waututh Nation Sacred Trust Initiative.

“Thanks to the effort of frontline Indigenous communities and grassroots activists, Lloyd’s of London syndicate Arch Insurance joins a growing list of insurance companies committing to no longer providing insurance for the Trans Mountain tar sands pipeline.  This is a victory for Indigenous rights, environmental and climate justice. It is time for the Trudeau administration to end the Trans Mountain pipeline,” said Matt Remle (Lakota), co-founder of Mazaska Talks

At Lloyd’s of London, specialist underwriters and insurance companies, grouped together as syndicates, operate globally, insuring around 40% of the global energy market. A very large part of this is fossil fuels. Lloyd’s is a central part of the wider London insurance market, writing more than half of its total premium. The London Market Group reported that, in 2018, the combined London insurance market accounted for 55% of global energy sector insurance premiums. [6] It also has a disturbing colonial history: From 1640 to the early 19th century, an estimated 3.1 million enslaved African people were transported by Britain’s vast shipping industry – and Lloyd’s was the global centre for insuring that industry. [7]

During the protest that shut down the Lloyd’s building, Extinction Rebellion announced that it would return to Lloyd’s to shut it down again until they end insurance for fossil fuels. Today, Extinction Rebellion marked the month anniversary of the protest by renewing their commitment to acting in solidarity with Trans Mountain pipeline Land Defenders and sending to Canada a banner which climbers unfilled down the side of the Lloyd’s building on the 12th April.

After a string of City institutions, including HSBC, Barclays and Standard Chartered, had their AGMs disrupted by climate protesters, Lloyd’s of London is encouraging members of its 100-odd syndicates to attend its annual general meeting next week online rather than in person, in anticipation of climate protests. [8] [9]

Extinction Rebellion said in a statement: “We are committed to disrupting business as usual until Lloyd’s of London ends it’s underwriting of fossil fuels. We know that our tactics are working. Since we blockaded the Lloyd’s building in solidarity with Land Defenders resisting the Trans Mountain Pipeline, two Lloyd’s insurers (Aspen and Arch) have cut ties with the project. Instead of trying to hide from public anger, by shifting their AGM online, Lloyd’s needs to be brave and take bold action to avoid climate breakdown.”