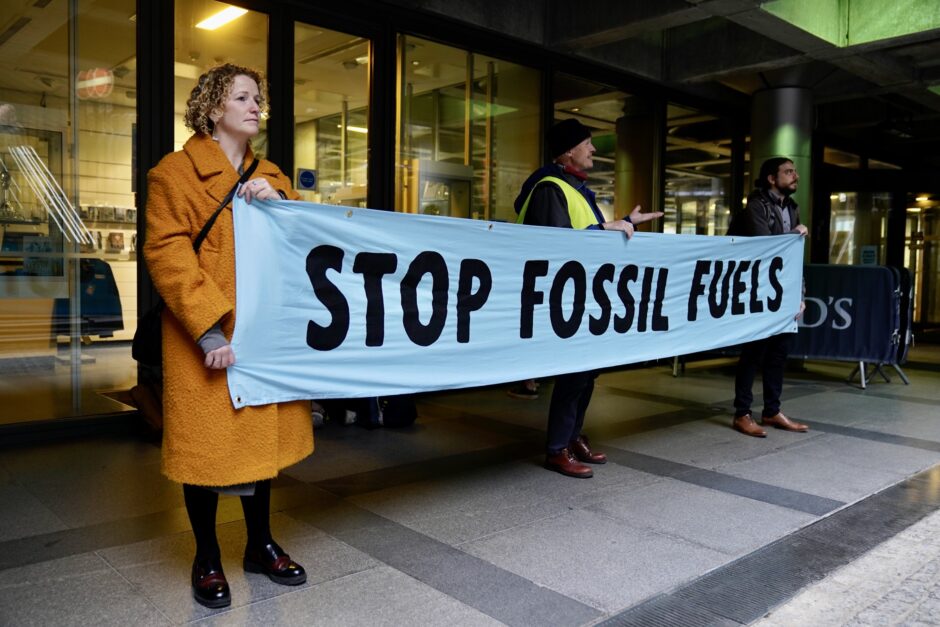 Today at 7am, more than 60 people from Extinction Rebellion blocked the entrances at Lloyd’s of London headquarters (1 Lyme St, London, UK), preventing staff from entering the building. The action aims to close the London based insurance and reinsurance giant for the day. Extinction Rebellion is demanding that Lloyd’s of London stop insuring fossil fuels projects, and highlighted the Trans Mountain Pipeline extension in Canada, which they believe is being insured through the Lloyd’s marketplace.

People used superglue, chains and bike locks, to block over twenty-five entrances to the building. Staff already inside were allowed to exit. Climbers also scaled the outside of the iconic building and dropped two banners, saying ‘End Fossil Fuels Now’ and ‘Insure Climate Justice’. Others stuck stickers on the windows that said ‘Stop Insuring Trans Mountain’. There was also a performance outside from the Dirty Scrubbers, Tea Ladies, CorpRats and Orchestrated Discontent.

Clare Walmsley, a spokesperson from Extinction Rebellion, said: “We’re here to demand an end to all new fossil fuel investments and insurance. By underwriting the world’s most deadly fossil fuel projects, they are creating climate chaos – floods, famine, wildfires and death. Insuring new oil and gas projects in the North Sea will do nothing to solve the cost of living crisis either. Instead, it locks us into a system that’s already pushing millions into poverty.

“We can see from Lloyd’s long racist history, that it has always been happy to trade lives for profit. Its business was kickstarted by insuring the trans-Atlantic slave trade. Today its underwriters support projects that sacrifice Indigenous, Black and brown communities on the frontlines of fossil fuel extraction and climate breakdown.”

The action is part of the April Rebellion and comes after 10 days of ongoing disruption across the UK from Extinction Rebellion and the Just Stop Oil coalition, resulting in fuel shortages all around the country. Both groups have vowed to continue disruption until the government stops all new fossil fuel investments. With the government’s new energy strategy doubling down on oil and gas in the North Sea in face of war in Ukraine – which is in complete contradiction to Paris Agreement commitments – Extinction Rebellion intends to continue to disrupt the fossil fuel industry until the demand is met.[1]

As employees arrived for work to find the building closed, they were greeted by members of XR’s TruthTeller project who invited them to blow the whistle about any planet damaging plans being insured by Lloyds. A flier addressed to “Dear Lloyds of London” noted that CEO John Neal has recently backtracked on a report that promised to phase out the most damaging activities by 2030, calling it nothing more than a “provocative discussion document.” [2]

The note asked: “As a fellow human being are you happy to help him take us down this highly dangerous path? As a Lloyd’s professional, do you think it makes long-term business sense to double down on a doomed sector? If not, we invite you to speak up. We also invite you to whistleblow.”

Craig Welsby, a spokesperson from Extinction Rebellion, said: “Lloyd’s CEO John Neil isn’t just refusing to take action to avoid climate breakdown, but is actively blocking efforts by other members of the Lloyd’s team to take action. In 2022 Lloyd’s unveiled a policy that would have seen the most polluting fossil fuels, coal and tar sand, blacklisted from the marketplace. Instead, we’re now told their policy isn’t worth the paper it’s written on. To safeguard a liveable planet, we need to stop fossil fuel expansion today, not recklessly squeeze every last bit of profit.”

The Trans Mountain Pipeline in Canada has been fiercely opposed by Indigenous communities whose land it cuts through, and would allow a dramatic increase in the amount of tar sands Canada could export, shipping 590,000 barrels per day of tar sands crude. Lloyd’s of London is amongst the insurers listed on the project’s most recent public certificate [3]. Lloyd’s and the syndicates that operate in its marketplace have been under intense pressure to rule out underwriting the project, with sixteen insurers taking action and cutting ties with the project [4].

Kayah George of Tsleil-Waututh Nation and Tulalip Tribes, said: “The Trans Mountain tar sands pipeline threatens my nation and our sacred Sleilwaut (Burrard) inlet; our place of creation. The pipeline poisons our clam beds and violates the rights of many Indigenous communities along its length and at its source. Expanding tar sands extraction and increasing the capacity of the Trans Mountain pipeline network is nothing less than climate destruction.

“To date, 16 companies have ruled out insuring the Trans Mountain expansion project, but insurers on the Lloyd’s of London marketplace likely remain as the pipeline’s lead insurers. The Lloyd’s marketplace and syndicates like Arch urgently need to get the message: it’s time to move away from dirty fossil fuels and instead uplift Indigenous rights, a healthy environment, and a stable climate.”

At Lloyd’s of London, specialist underwriters and insurance companies, grouped together as syndicates, operate globally, insuring around 40% of the global energy market. A very large part of this is fossil fuels. Lloyd’s is a central part of the wider London insurance market, writing more than half of its total premium. The London Market Group reported that, in 2018, the combined London insurance market accounted for 55% of global energy sector insurance premiums [6]. It also has a disturbing colonial history: From 1640 to the early 19th century, an estimated 3.1 million enslaved African people were transported by Britain’s vast shipping industry – and Lloyd’s was the global centre for insuring that industry.[7]

Lloyd’s has come under increasing pressure to end its underwriting of fossil fuel projects from local people, scientists, and climate protesters across the globe. Previous protests have included a tipper truck to dumping a large pile of fake coal outside the entrance, green paint being thrown over the building to highlight their greenwash, 1000 litres fake oil spill and a climate memorial led by Pacific Inlanders, who had travelled to the UK for the COP26 climate talks.[10][11]

TruthTeller is XR’s whistleblowing project to help employees at planet-damaging companies anonymously disclose what they know. We’re seeking out potential whistleblowers within target industries and asking them to share insider information via our secure platform www.TruthTeller.Life

TruthTeller is also a new type of precision activism.  As well as triggering leaks –  which we’ll publish safely and anonymously in collaboration with trusted news outlets –  we want to send a warning to any company guilty of greenwash or damage to the planet, that they’re at imminent risk of public exposure.