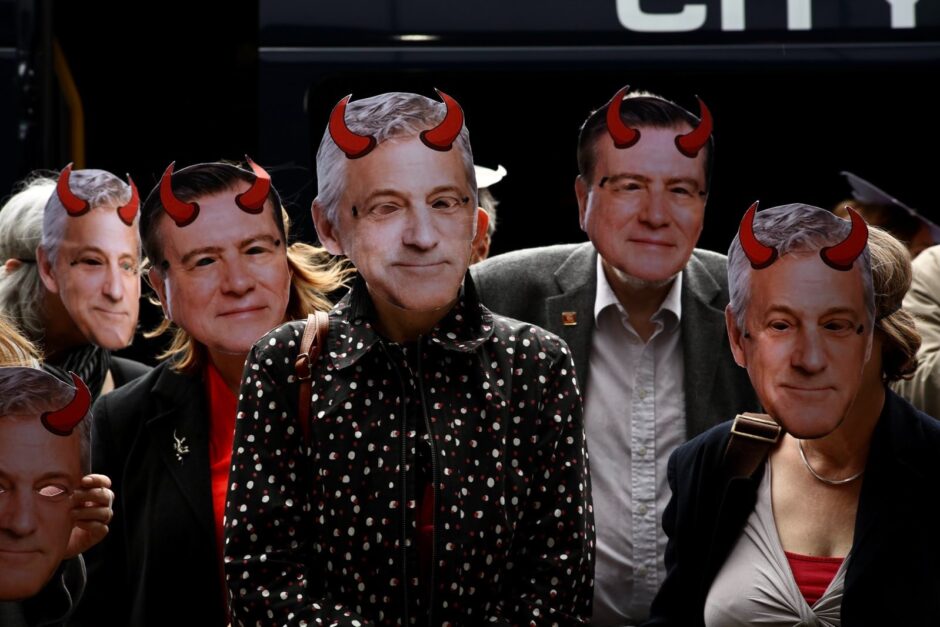 At 11 AM on Wednesday May 4th, Members of Extinction Rebellion, and sister movement Money Rebellion, disrupted the annual general meetings of Barclays and Standard Chartered, demanding both banks stop financing fossil fuels. A total of around 60 people interrupted speeches at both meetings, with some wearing masks of Standard Chartered’s Chairman, José Viñals, and the bank’s CEO, Bill Winters, while at the Barclays AGM protestors set off personal alarms.

Barclays is the UK’s largest investor in fossil fuels, having put over $19.6 Billion into the industry in 2021 alone, while Standard Chartered financed over $6 Billion in the same year, ranking them the third biggest UK bank investing in fossil fuels behind Barclays and HSBC. [1]

The action comes following a stark warning from the UN Secretary General earlier this month that investment in new fossil fuels is ‘moral and economic madness’. [2] The recent IPCC report on climate change mitigation found that financial flows for fossil fuels are still greater than those for climate adaptation and mitigation and that meeting national climate targets would leave large amounts of fossil fuels unburned – meaning up to $4 trillion in stranded assets in the US alone. [3]

Student and member of Money Rebellion, Aidan Knox, 22, who took part in the action at the Standard Chartered AGM, said: “We are disrupting the AGMs because we are in a climate crisis, but Barclays & Standard Chartered are more interested in their profits than a habitable planet.

“The UN Secretary General said: ‘We’re at code red for humanity’ and the International Energy Agency has called for no more investments in fossil fuel expansion if there’s any chance to meet the Paris Agreement, yet Barclays has ploughed $4 billion, and Standard Chartered $3 billion, into companies expanding oil and gas in 2021 alone. From a pipeline in Mozambique to coal mines in Indonesia, right now, real people are suffering from these investments in fossil fuel projects.

“We are scared for the future and we have no other option but to pressure these UK banks to change.”

Mitzy Jonelle Tan, a Fridays for Future Philippines activist, wrote an open letter to Standard Chartered CEO Bill Withers about the coal plants in the Philippines financed by them:

“San Miguel Corporation, which you finance through its parent company, has been evicting people from their homes, stealing land from farmers, and causing small fisherfolk to lose their livelihood. The companies you finance bring down ashfall on everyone, covering homes with a soot that also smothers their cries of anger, and send armed men to destroy the communities of those who have been fighting back.¨ [4]

Bill Winters is yet to respond.

Barclays and Standard Chartered AGMs are the latest to see disruption from protestors demanding an end to fossil fuel investments. HSBC’s meeting was interrupted last week with protestors singing a a revised version of the Abba hit Money, Money, Money during the chairman’s speech. [5]

“Banks can change the world but, right now, profit from the world’s destruction. Something’s gotta change. Are you going to change it or do we have to make you?” Said financial technology commentator Chris Skinner. [6]

For footage and images of the action: