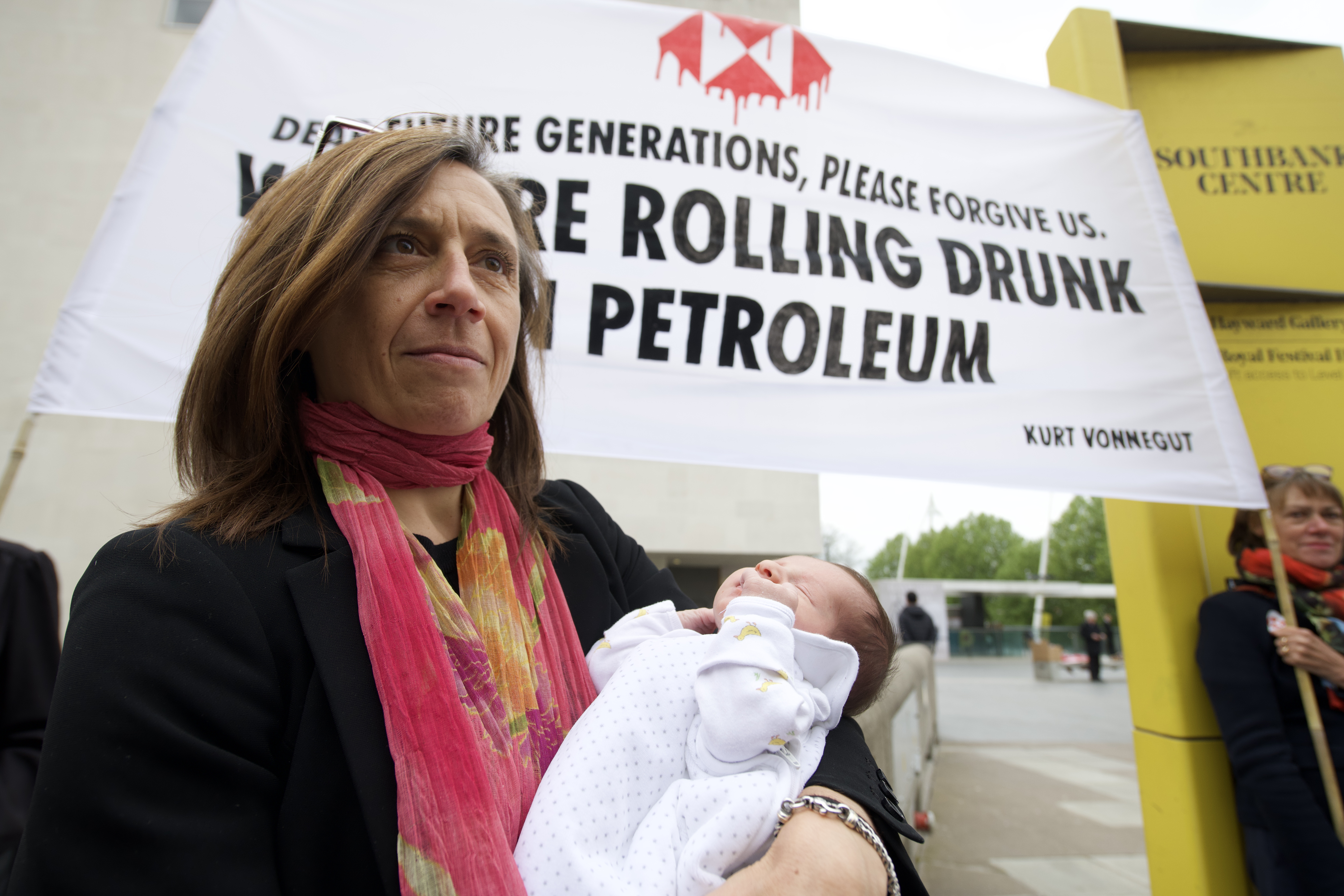 At around 11:30 AM on Friday April 29 members of Money Rebellion, a group within Extinction Rebellion specifically targeting financial institutions, disrupted HSBC’s Annual General Meeting in central London to demand that the banking and financial services giant stop investing in new fossil fuel projects immediately. Shortly after the AGM began at 11am in Queen Elizabeth Hall on the Southbank a flash mob of singers interrupted HSBC Chairman Mark Tucker’s speech, singing a revised version of the Abba hit Money, Money, Money. [1]

Outside the venue attendees were greeted with a banner bearing a quote from Kurt Vonnegut which read: ‘Dear future generations, please accept our apologies. We were rolling drunk on petroleum.’

Performers gathered outside the venue from 11am dressed as bankers with cigars and champagne flutes full of fake oil and toasted their fossil-fueled profits as HSBC management and shareholders filed into the venue. In 2021 alone, HSBC invested nearly $18 billion in the fossil fuel industry, and last May news leaked that HSBC had stakes in companies planning 73 new coal power plants.[2] [3]

The multinational banking and financial services firm also remains a major banker for Saudi Aramco and Exxonmobil, which are ranked first and fourth respectively in the Carbon Majors database of fossil fuel companies responsible for global carbon emissions since 1965. [4] [5]

The action comes following a stark warning from the UN Secretary General earlier this month that investment in new fossil fuels is ‘moral and economic madness’. [6] The recent IPCC report on climate change mitigation found that financial flows for fossil fuels are still greater than those for climate adaptation and mitigation and that meeting national climate targets would leave large amounts of fossil fuels unburned – meaning up to $4 trillion in stranded assets in the US alone. [7]

Member of Money Rebellion, mother and former trade commodity finance manager at Rabobank, Claude Fourcroy, said: “Let’s face it, banks are not going to regulate themselves and do the right thing. Bringing them together under one umbrella like the GFANZ, allows the Banks to set a pace that suits them.

“There is no longer any question that financing new fossil fuel infrastructure should be a financial crime. Everyone present at HSBC’s AGM today is aware of this by now and should think about the legacy they want to leave.”

Bristol-based group, The EarthQuakes, also took part in the action, posing a specific challenge to HSBC shareholders: Is it ok for our banks to keep funding fossil fuels, even Russian oil and gas companies?HSBC owns equity stakes in five of the biggest Russian oil and gas companies – Gazprom,Rosneft, Tatneft, Lukoil and Novatek. They have more than 16 million shares in Gazpromand nearly a million shares in Rosneft, and as the Russian state is the biggest shareholder in both these companies, HSBC’s investments are helping to fund the invasion of Ukraine. [8]

Jo Flanagan from EarthQuakes, said: “We want to encourage shareholders and customers to find out what HSBC is doing with their money and to ask difficult questions. Do they really want to support a bank which is driving escalating climate change and funding bloodshed in Ukraine?

“Our central charge against HSBC is that they appear to see nothing wrong in making a profit by trashing our planet. If shareholders think it’s OK to continue investing with HSBC, we would urge them to consider how they will explain that decision to their children.”

The EarthQuakes also called on the Government and HSBC to “Clean Up Moscow-on-Thames”, because London is the money laundering capital for Russian oligarchs. This follows the undisputed findings by the Financial Conduct Authority in December 2021 that HSBC failed to block improper transactions leading to the funding of money laundering and terrorist activities. [9]

The action today was the first of a series of protests planned by different groups as part of the Defund Climate Chaos coalition. [10] Over the next few weeks public demonstrations will take place outside the AGMs of Barclays, Standard Chartered, Lloyd’s of London and Shell.

Andrew Taylor from Defund Climate Chaos, said: “We will target you, we will regulate you, we will prosecute you, we will dismantle the economic systems and systems of power that you maintain, we will force you to make reparations for the climate crisis and extractivism that you continue to enable around the world.”

The action also followers several weeks of disruption from groups including Extinction Rebellion and supporters of the Just Stop Oil coalition to demand an immediate end to all new fossil fuel investments. Other groups working to end fossil fuels include the Climate Change Committee, The Intergovernmental Panel on Climate Change (The IPCC), The International Energy Agency, UNEP and the UN. [11]

For footage and images of the action:

[3] HSBC has stakes in firms that plan more than 70 new coal plants: https://www.theguardian.com/world/2021/may/12/hsbc-has-stakes-in-firms-that-plan-more-than-70-new-coal-plants

[4] Oil & gas expansion A lose-lose bet for banks and their investors:

Moscow-on-Thames: Soviet-born billionaires and their ties to UK’s political elite:

The ‘London laundromat’: will Britain wean itself off Russian money?