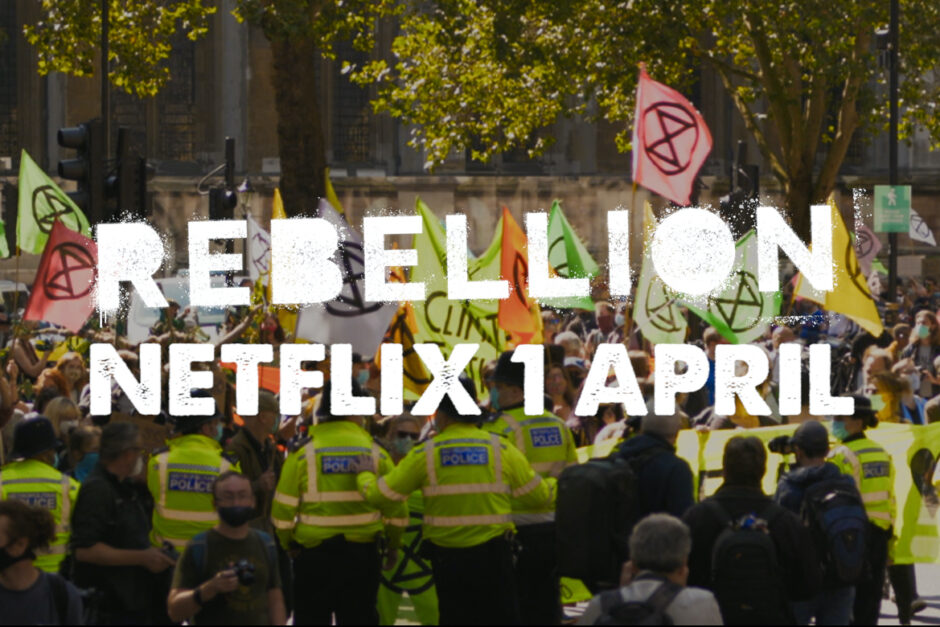 APRIL 1: REBELLION Documentary launches on Netflix telling the inside story of Extinction Rebellion

Directed by Maia Kenworthy and Elena Sánchez Bellot and produced by Kat Mansoor, Rebellion is the first feature-length documentary to tell the intimate story of the climate movement that went on to become an overnight global sensation in April 2019. Given unprecedented access, the filmmakers follow a number of people who came together to confront the climate and ecological emergency, facing unimaginable challenges at a time when the world was waking up to the scale of the crisis.

Rebellion follows the journey of XR co-founders as well as Farhana Yamin, an international environmental lawyer who played a key role in negotiating the Paris Climate Agreement, as she decides to break the law for the first time. After decades of UN climate negotiations, Farhana is determined to sound the alarm and see governments act.

As Farhana says in the film: “I’d come into the UN system thinking it’s a fair fight – we’ve got science and law and economic analysis. But you had intensive lobbying from the fossil fuel industries, and the financial industries that support them, and it wasn’t a fair fight.”

In April 2019, XR brought London to a standstill as thousands took part in the biggest act of civil disobedience since the Suffragettes. Within days of the action, a climate emergency was declared by the UK Parliament and XR was named the number 1 influencer on climate that year. Many countries around the world, from Canada to Bangladesh, declared climate emergencies shortly after.

A spokesperson for Extinction Rebellion said: “Being a part of XR has been a complete whirlwind, with many highs and lows, but it’s been incredible to be a part of something that’s had such a huge impact globally. The film takes an honest view at just how difficult building a mass movement can be, while also showing the beauty and power of it too.

“What it does best is show the real people behind XR, that we’re just ordinary people trying to do the seemingly impossible. I hope people watch this and feel inspired to step up into action and to join the Rebellion in London on April 9th. Because the fight to tackle the climate emergency has barely even started and people in Extinction Rebellion are still risking their freedoms everyday.”

Rebellion crucially tells a story about the health of our own democracy. The moment of protest freedoms depicted in the film may soon be impossible. The film’s release comes as parliament this month will debate the Police, Crime, Sentencing and Courts Bill that aims to curtail the space for non-violent protest. The Bill has been criticised by human rights campaigners as an attack on free speech and democracy.

The film comes just a week before Extinction Rebellion takes to the streets in mass civil resistance in London from April 9th. While joining forces with other movements to block UK oil refineries, thousands of people are expected to flood the streets of London again until the government agrees to end all new fossil fuel investments immediately.

Maia Kenworthy is an independent documentary filmmaker from London. She has directed and produced films for charities and arts organisations, and taught creative workshops in schools and universities across the UK. With a background in history and art, she has always been interested in visual storytelling and the ways it can connect us to each other. In 2018 she met the co-founders of Extinction Rebellion and has spent the last four years immersed in the world of activism.

Elena Sánchez Bellot is a Spanish filmmaker based in London. She is a self-shooting director and editor, keen on capturing the nuanced and complicated ways in which we are human. Her previous work includes films for public sector institutions such as the National Housing Federation and Arts Council England, as well as private clients like the NBA, MTV and NBC. She runs workshops for filmmakers and teaches on the Documentary Film MA at University College London. This is the first feature film she has directed.

Kat Mansoor is an award-winning producer with 20 years of industry experience. She has worked with BBC Films, Channel4, Film 4, Netflix and Vice to consistently deliver a slate of highly acclaimed films. Kat’s work has been shown around the world at festivals such as Cannes, Telluride, SXSW, IDFA. Her film credits include double Grierson winning HERE’S JOHNNY, BLACKOUT, WOJTEK, THE BEAR THAT WENT TO WAR, THE MAN WHOSE MIND, IDA’S DIARY, LOST AND SOUND, and WHAT WE BELIEVE. Kat’s most recent releases include COW, directed by Andrea Arnold, and which premiered at Cannes 2021, and REBELLION which will be released on Netflix in April 2022.