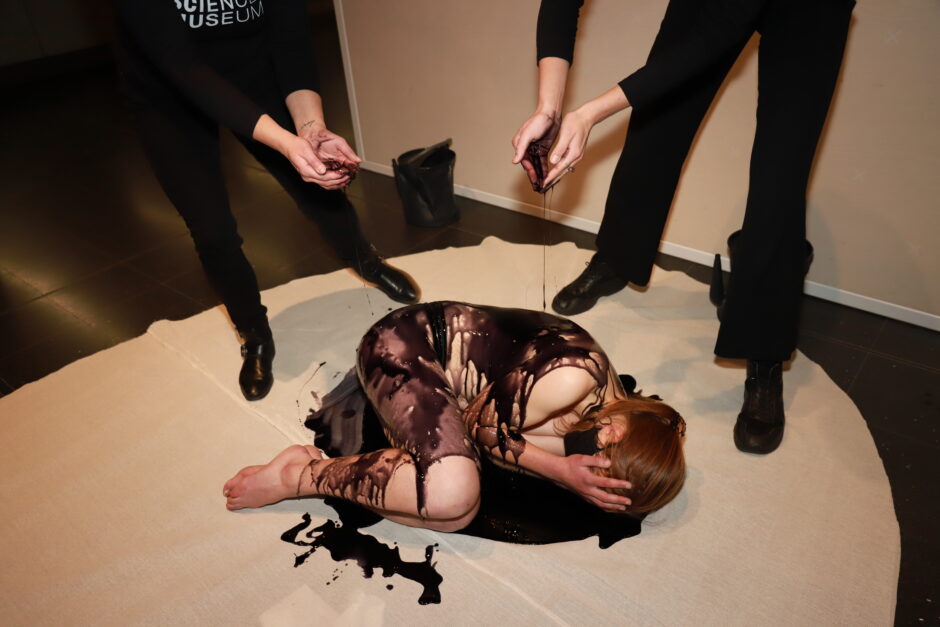 On Wednesday 24th November, Extinction Rebellion staged a live art protest at Lates, the famous after-hours theme nights at the Science Museum. Starting at 8pm, Dozens of protestors dressed in black, wearing signs reading ‘Coal & Oil Out of Our Museum’ gathered in the Museum. They paused every 30 minutes, chanting an appeal to the trustees, begging them to cut all oil, gas and coal sponsorship. The chants could be heard resonating around the museum as protestors stood like human speakers amongst a bemused crowd of visitors, calling on the trustees to hear their plea.

At 9:30pm a young woman, laying down in a foetal position had an oil-like substance poured over her naked body by two protestors dressed in black, wearing the Science Museum logo. The oil was poured in a solemn manner, symbolising the damage that the Science Museum is doing by giving fossil fuel companies a social licence while the most vulnerable people on the planet are suffering. The group took great care not to damage the floor and to respect safety regulations.

This is the latest attempt by Extinction Rebellion to reach out to the management of the museum, who have written several letters and staged a number of protests including an overnight occupation inside the museum. [1] [2] [3] [4] A number of organisations including Culture Unstained, the UK Student Climate Network and Fossil Free London have raised their outcry to the Fossil Fuel sponsorship. [5] [6]

“We have tried everything” said Rafela Fitzhugh, a teacher living in Hammersmith and Fulham, “but, while the Science Museum continues to partner with companies that continue to increase their extraction of fossil fuels against all the warnings from scientists and the International Energy Agency, we have no choice. So tonight, inspired by the plea of Elizabeth Wathuti at COP26, we are asking the Trustees to open their hearts, and begging them to do the right thing.” [7]

The performance comes only a few days after dozens of scientists and contributors have pledged not to work with the Science Museum again. [8] Their voices are just the latest addition to a series of resignations from Trustees and from Chris Rapley (former director of the Science Museum), calling for the Group’s senior leadership and trustees to end ties with fossil fuel sponsors. [9] [10] It was also announced on Monday that Anna Phoebe and Space Rocks were withdrawing from performing at tonight’s event. [11]

Dr Aaron Thierry, Ecologist, said: “The museum management are destroying their own reputation to greenwash Adani and Shell’s. The trustees need to step in and protect what’s left of the museum’s good name”

Louisa Jones, museum learning specialist, said: “Museums have a crucial role to play in guiding the public through the complex issues surrounding climate breakdown. How can the Science Museum Group do so objectively when its fossil fuel-industry sponsors have spread ecological damage and human rights abuses in their wake: Shell in Ogoniland, Nigeria, Equinor in Vaca Muerta, Argentina, BP in West Papua and Adani in Chhattisgarh, India? I am here today demanding the trustees stand up for the integrity of our profession, in solidarity with all peoples suffering from these climate crimes.”