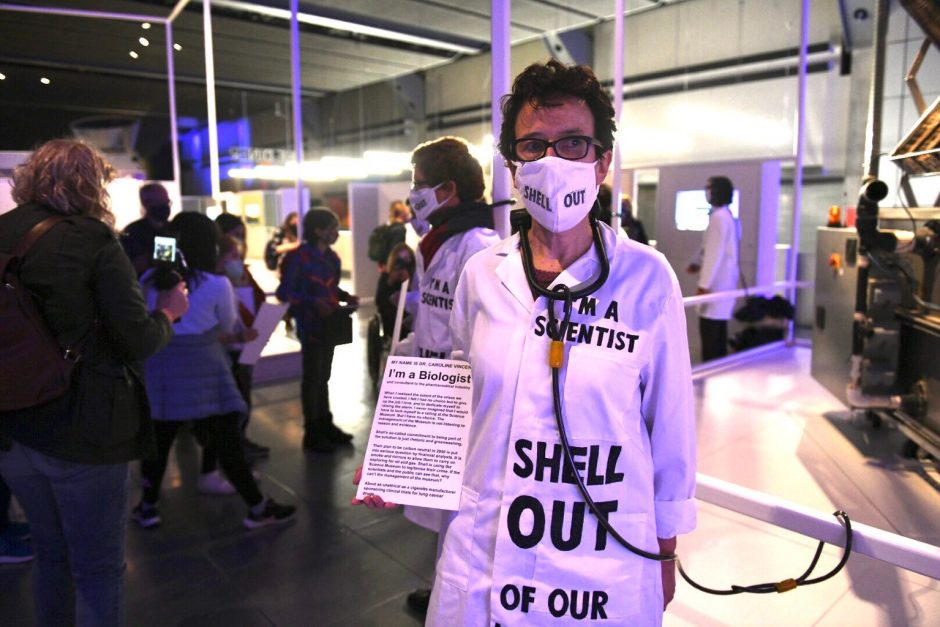 At 10:30 AM on Wednesday 19th May, a group of scientists from Extinction Rebellion locked themselves to a mechanical tree in the Science Museum, the centerpiece of the Shell sponsored Our Future Planet exhibition. The group, who used bicycle cables and D-locks to lock themselves inside the exhibit on the opening day, explained that the decision by the Science Museum Group to continue to accept Shell sponsorship gives legitimacy to the fossil fuel giant’s planetary destruction. The group took great care not to damage the exhibit and to respect safety regulations.

The action comes just a day after the International Energy Agency announced that in order for the world to reach net zero and comply with the Paris Climate Agreement’s temperature limit of 1.5 degrees, no new oil or gas exploration should take place beyond the end of this year. [1] In the run up to Shell’s AGM yesterday shareholders slammed the oil giant’s climate plans, describing them as “vague commitments that don’t do anything.” [2]

Scientists across the UK, including several involved in creating the exhibition, have expressed horror and embarrassment at Shell’s sponsorship and have pointed out that other museums have listened to the demands of the public, their staff and scientists and severed their ties with the fossil fuel industry. [3] [4] [5] Organisers of the school strike movement have also called for a boycott of the exhibition. [6]

Scientists for Extinction Rebellion wrote to the director of the Science Museum Group, Sir Ian Blatchford, in May asking that the Museum cut all ties with big oil companies, many of which have an extensive track record of funding the distortion of science as well as countless accusations of human rights abuses. [7] [8] In his response, Sir Ian failed to address the points raised by Scientists for Extinction Rebellion, pointing to the Museum’s efforts to decrease it’s own carbon footprint and neglecting to address far greater impacts of greenwashing the fossil fuel industry. [9]

Investigations have revealed that Shell knew about the dire threat of the climate crisis over 30 years ago, but went on to fund climate denial think tanks and lobbyists, fighting against necessary climate action and continuing to double down on fossil fuel production. [10]

Dr. Caroline Vincent, 58, a pharmaceutical industry consultant who locked on inside the museum, said: “When I realised the extent of the crises we had created, I felt that I had no choice but to give up the job I loved, to dedicate myself to raising the alarm. I never imagined that I would have to lock myself to a railing at the Science Museum. But I have no choice. The management of the Museum is not listening to reason and evidence!

“Shell’s so-called commitment to be part of the solution is just rhetoric and greenwashing. Their plan to be carbon neutral in 2050 is put into serious question by financial analysts. This sponsorship is smoke and mirrors to allow them to carry on exploring for oil and gas. Shell is using the Science Museum to legitimise their crime. If the scientists and the public can see that, why can’t the management of the museum? About as unethical as a cigarette manufacturer sponsoring clinical trials for lung cancer drugs.”

Outside the museum, Scientists for Extinction Rebellion held an alternative exhibit to explain to visitors why the protest was happening. They were joined by street performers, speakers and alternative exhibits on climate and ecological emergencies to engage the public. Speakers included representatives of the Ogoni people, who’s land in the Niger Delta continues to be devastated by Shell’s activities, for which Shell is still refusing to take responsibility. [11]

Further quotes from the scientists involved:

Dr. Valeria Scagliotti, 33, Biologist, who locked on inside the museum, said:
“My research focuses on improving the outcome of a pregnancy condition, so that new-borns could live a better life. But what’s the point in helping these babies before they’re born, if at the same time we don’t fight to ensure that they’ll have a planet to thrive on? That’s why I’ve decided to take action today. I cannot watch the world falling apart any longer.

“After everything that Shell has done to our planet in terms of human rights abuse, environmental devastation and misrepresentation of science, how can Shell still have a voice on our planet’s future? As a scientist and a young woman, I’m terrified to spend all my years ahead witnessing environmental and humanitarian crises spiralling out of control. And I’m outraged that our best chances to stabilize the environmental crisis are slipping away because people have been tricked to place their trust in the same companies that mostly contributed to this crisis.”

Dr. Ben Buse, 35, Geologist and Electron Microprobe Specialist, who locked on inside the museum, said: “We can no longer hide behind ignorance and greenwash. As a geologist I am a member of  a profession that has contributed to the exploitation of the earth. Now is the time to awaken to our responsibility. I ask the science museum to stop providing credibility to Shell’s green credentials; to stop the myth that unproven carbon capture can save us – this prevents the essential emergency response – the need for rapid and immediate  carbon emission reduction.”

Pete Knapp, 35, Air Quality researcher, who locked on inside the museum, said: “I worked at CERN on an antimatter experiment, and then decided to research air quality once I discovered that globally 8 million people a year die every year from breathing air pollution from burning coal, petrol and diesel. I am doing a PhD in air quality now because I want this to change.

“I love the Science Museum. Science is our ally in averting the worst effects of the climate and ecological emergency, but this dirty deal with Shell is an insult to science. The National Theatre, the BFI, the Southbank Centre and the Tate galleries have all cut ties with oil companies, yet the Science Museum trails behind. If anyone should stand up against Shell and its sickening anti-science propaganda, it should be the Science Museum. I feel betrayed.”

Jen, 41, Data Science researcher, said: “I came to the museum when I was a child, this place opened my eyes up to the wonder of science. I’m a mum now, I’ve brought my children here – and they will live with the consequences of inaction on the climate and ecological emergency. I simply can’t stand by and let The Science Museum allow itself to be used to legitimise Shell’s ongoing destruction of our planet, and its long term silencing of the science. I’m calling on the museum to end their fossil fuel funding and tell the truth about Shell.”

Dr. Abi Perrin, 31, Microbiologist, said: “I spent a decade researching infectious diseases, particularly malaria, before a recent switch to trying to understand more about photosynthetic microbes which have a remarkable ability to concentrate carbon dioxide and potential for use in the more sustainable industries of the future.

“The Science Museum is doing important work in communicating the climate and ecological crises, but this is undermined by their partnership with Shell, a company whose activities have already had a devastating impact on our climate, ecosystems and communities. Rather than cleaning up their mess, they continue to pour the vast majority of their extensive resources into fossil fuels, which the science is clear will have disastrous consequences.”

Dr. Aaron Thierry, 34, Ecologist, who locked on at the museum and has researched climate impacts in Arctic Canada, said: “I have been inspired by the Youth Strikes and Extinction Rebellion, who have used mass civil disobedience to finally force our institutions to respond to the urgency of the climate and ecological emergency and stand up to the corrupting power of the fossil fuel industry. Teachers, doctors, gardeners, plumbers  have all  listened to the warnings from the scientific community and risked arrest to protect their families’ futures. It’s time scientists step up and join these movements and act in line with our own findings.”

[1] Eco investors turn up the heat on Shell over climate target: https://www.theguardian.com/business/2021/may/16/eco-investors-turn-up-heat-on-shell-over-climate-target

[5] SHELL’S LONG-RUNNING RELATIONSHIPS WITH SOUTHBANK CENTRE AND BFI TO END THIS YEAR:https://cultureunstained.org/2020/03/10/shells-long-running-relationships-with-southbank-centre-and-bfi-to-end-this-year/

[10] Shell made a film about climate change in 1991 (then neglected to heed its own warning): https://thecorrespondent.com/6285